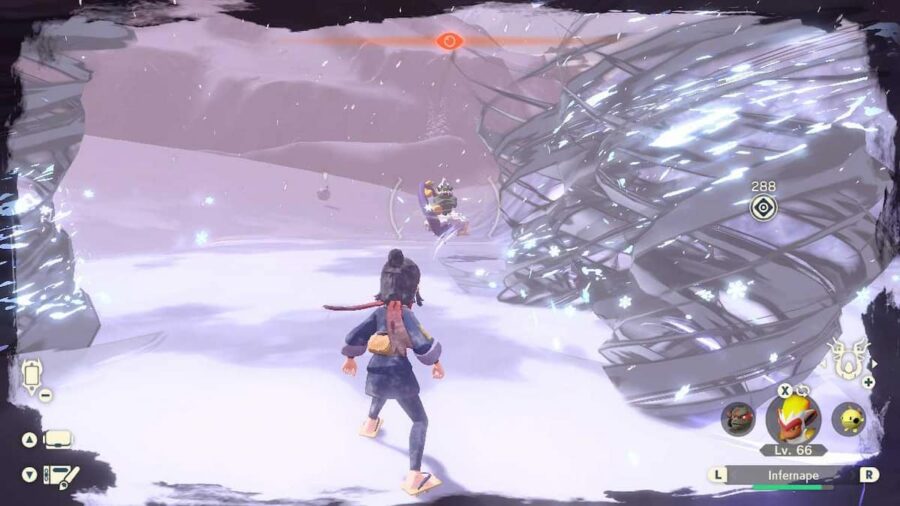 After you’ve beaten Volo, Cogita will inform you of the locations of Pokémon said to be “incarnates of the forces of nature.” At first, she will only give you hints to the location of three: Landorus, Thundurus, and Tornadus. Later on, she will show you how to get to Enamorus.

This request is not easy, and capturing them can get pretty annoying. But don’t worry, we’re here to help.

How to capture Landorus

Landorus appears on Ramanas Island in Obsidian Fieldlands. He’s the easiest to capture among the four genies. This is because Ramanas Island is surroundedby tall grasses you can hide in.

Landorus will be surrounded by a thick storm. If you want to capture him, you need to bring it down. You can do this by hitting him three times. Crouch in a nearby patch of grass, get close, and throw anything. You can even throw Pokémon if you don’t want to waste items.

After the third shot, the X mark above Landorus’ head will disappear, and you can finally capture him. The best way to do so is to weaken him in battle. He can easily escape capture if you don’t reduce his HP or inflict a status ailment.

How to capture Thundurus

Thundurus wanders on the waters north of Sand’s Reach in Cobalt Coastlands during a thunderstorm (we've marked it with a flag on our map). You will know there’s a thunderstorm if the icon on the top left of the map is a cloud with a lightning symbol on it. To get a thunderstorm, keep resting at camp until you get one. Night is recommended.

He’ll be surrounded by aggressive Gyaradoses. If you want to chase him with no obstacles—and this is optional—defeat all the Gyarados. They’re low-leveled (around 30, the Alpha is a 40) enough to be one-hit KO’d by an Electric Pokémon of a higher level.

To capture Thundurus, you will also need to hit him three times first so he brings the storm down. However, he will run away if you get too close. There are two ways to go about this encounter:

When the storm that surrounds him fades, battle him.

How to capture Tornadus

Tornadus can be found in Bonechill Wastes at Alabaster Highlands during a blizzard. You’ll know there’s a blizzard if the icon on the top left corner of your map has a snowflake and wind icon on it. To get a blizzard, do the same thing as before: keep resting at camp until you get one.

Tornadus will be surrounded by Glailies (together with an Alpha). Much like the hunt for Thundurus, you can opt to defeat them before you chase after the genie.

Much like the other two, you will need to hit Tornadus three times. You can try using Feather Balls, but Tornadus is extremely sensitive and much faster than Thundurus. It's better to get close and do a lock-on throw.

To do this, head in his direction and wait for him to summon the tornados. There will, once again, be gaps in between them that you can slip into. Once you get close enough, throw anything.

When you have all three, grind their research levels to 10. It’s super easy—just battle wild Pokémon and spam the two moves found on their research task lists in Agile or Strong style. When you can have ten check marks for all three Pokémon, report it to the Professor and meet with Cogita. She will tell you about the last genie, Enamorus, and where to find her.

Enamorus can be found in the Scarlet Bog in Crimson Mirelands. The best time to visit is midday so you don’t have to deal with the aggressive Gastlys. Enamorus is fast, more sensitive than Tornadus, and summons four tornados. If you stop moving close to her, she will also a summon a tornado on the spot that you're standing on.

Now, this all sounds scary (and it is), but Scarlet Bog is a very good location to cheese her capture. All you need are Smoke Bombs. You can craft them with Sootfoot Roots and Caster Ferns.

Smoke Bombs summon a huge patch of smog you can enter and hide in. Throw it near rocks you can hide behind or into the swamps, depending on where Enamorus is. If the smog is in the swamp, your character will be partially submerged, so Enamorus won’t be able to see you walking at all!

Just remember to throw the Smoke Bombs while your character is far away from Enamorus so she doesn’t get alerted.

Once you get within throwing distance, throw! Again, you need to hit her three times before you can issue a battle. After you capture Enamorus, raise her research level to 10 and report back to Cogita. The request is complete!

How to complete the Incarnate Forces request in Pokémon Legends: Arceus