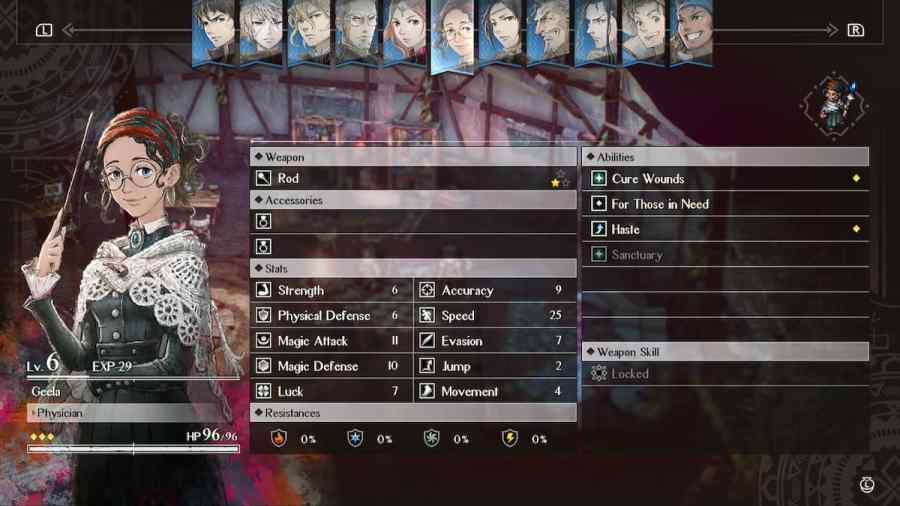 Geela Breisse is of vital use as your team's only healer early in Triangle Strategy. Before others such as Hossabara or Narve enter the scene, Geela will be indispensable to see you through the game's first few chapters.

Unsurprisingly, Geela's attack and defense stats are low. As the healer, she will seem to be targeted more than the others, and you'll need to keep her out of dangerous territory as much as possible. Protect her, and see that she self-heals with her default ability, Cure Wounds.

You'll want to deploy Geela for every battle, or your health-recovery items will surely be depleted. But Cure Wounds has a good range, and you'll be able to help your allies from safety at least half the time. Her automatic ability For Those in Need will also grant additional HP while healing allies whose health is below 50 percent.

Geela will next gain the Haste ability, which boosts allies' speed for three turns and may prove integral in turning battle tides. Next learned, Sanctuary will heal multiple allies within a range, and Heal What Ails You will alleviate any status conditions.

Mend Wounds, learned as Geela maximizes her capabilities, will grant the largest amount of health to a single ally at the hefty cost of three TP (turn points). It will be up to you whether to use Geela later in the game, but she is certainly a healing powerhouse that will always be among your strongest assets.

Geela Breisse's Recruit class is Physician, but she can be promoted to Curist with one Medal of Bravery at level ten. At level 20, she may be promoted to Master Curist with a Medal of Valor. At this Elite class, Geela gains the passive ability Fight or Flight, which increases her movement by one when enemies are close. But in her third weapon rank, Geela can be upgraded to learn Miraculous Light, which can raise a fallen ally.

You may want to make promotion for Geela a priority, depending on your preferred playstyle—since her advanced healing spells are invaluable later in the game. Whatever you choose, use Geela's strengths strategically to gain the upper hand.

How to use Geela Breisse – Triangle Strategy Unit Guide