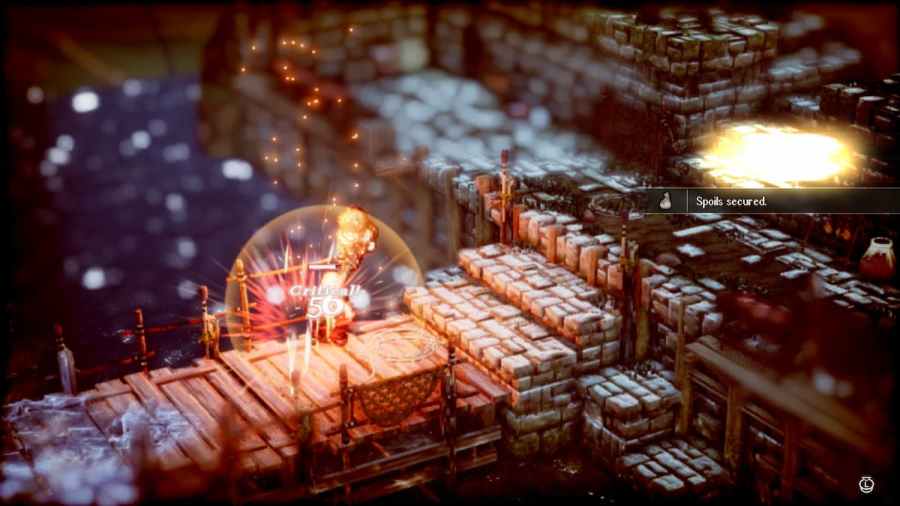 Serenoa Wolffort deals the strong physical damage expected of Triangle Strategy's main protagonist. His abilities as a swordsman are unparalleled in the game, and his stats, including attack, defense, and speed are all high. He's an indispensable asset to your team any way you cut it.

Serenoa's default ability, Delayed Strike, will inflict slightly less damage than his regular sword attack, but it will delay the enemy's action by one whole turn. At only one TP (Turn Point), this move is worth using every time as you're starting out. Enemy armies will be significantly hindered.

His Pursuit Stance ability learned at level three will increase the power and accuracy of Serenoa's Follow-Up attacks. Strategic positioning of the Serenoa unit is key—put him adjacent to the target of your attacking ally, and he will use his Follow-Up attack on that same target. You may be able to turn the tide of any battle with this ability.

But Serenoa learns a series of powerful abilities with more levels up. Hawk Dive at level five is a spectacle, dealing serious damage to one nearby enemy, especially if performed from higher ground. Counter Stance, learned at level seven, affords the chance of a counterstrike upon receiving an enemy blow, and at level ten, the impressive Sweeping Slash will decimate all foes within Serenoa's range.

When Serenoa reaches level 15, the ability Strength in Numbers will increase his attack power whenever allies are close. So, since Serenoa will be in the thick of battle, make sure he has the necessary support. Use a healer or use Benedict, whose Raging Bull ability can raise Serenoa's attack even higher.

Serenoa Wolffort's class default is Swordsman, but he can be promoted to Swordfighter with one Medal of Bravery at level ten. At level 20, he may be promoted to Swordmaster with a Medal of Valor. Upgrade Serenoa to Weapon Rank Two to unlock upgrades to increase the attack range of Hawk Dive as well as the damage power of Delaying Strike. You can also raise his Luck, which heightens the chance for a critical hit.

Weapon Rank Three includes the passive skill Rout and Recover, which allows Serenoa to recover HP when he defeats enemies. His last upgrade ability is Under Conviction's Banner, an extremely useful move that grants one TP to all allies within range. Use Serenoa's considerable strengths strategically, and the rewards will be sweet.

How to use Serenoa Wolffort – Triangle Strategy Unit Guide