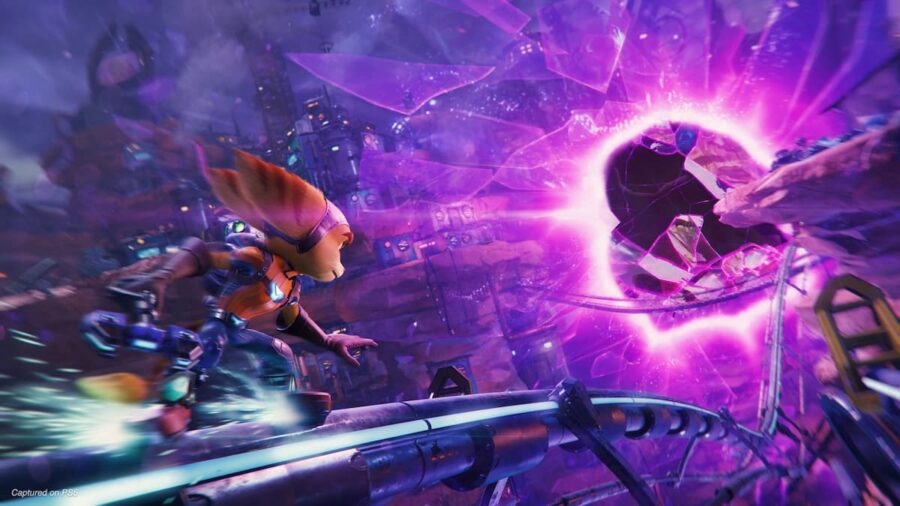 Ratchet & Clank: Rift Apart thrusts you into the action after Dr. Nefarious and his goons crash the parade at the beginning of the game. About 70% into this beginning sequence, you will meet Mrs. Zurkon, the shopkeeper of the weapons. The Shatterbomb and The Enforcer are the first two available weapons, but you can only afford one. So which one should be purchased first?

At first it will seem like you can only afford one, but the immediate action segment upon purchasing the first weapon ensures your ability to secure the second weapon before leaving the area. But in order to snag both, you must have been destroying all of the boxes leading up to this point.

If you have been destroying the boxes, you will have more than enough bolts to purchase one weapon, and your first choice is ultimately up to preference and playstyle. So, assuming you destroyed the boxes, purchase one weapon, complete the immediate action segment, and then return to Mrs. Zurkon before leaving the area. You will most likely have enough for the second weapon, as we did.

The Enforcer serves as a single or double barrel shotgun and allows you to get up close and personal without taking as much damage. The Shatterbomb, however, is best used for mid-range throwing since you have distance between lobbing grenades. We went with the Enforcer first.

It's best to own and test out as many weapons as you can while playing Ratchet & Clank: Rift Apart in order to learn new offensive strategies, so we recommend purchasing both weapons as soon as possible while you are given the opportunity.

For more on Ratchet & Clank: Rift Apart, be sure to check back with Pro Game Guides.

All Bear Locations in Ratchet and Clank: Rift Apart

How to Get All Trophies in Ratchet & Clank: Rift Apart

Ratchet & Clank: Rift Apart – How To Unlock the Pixelizer