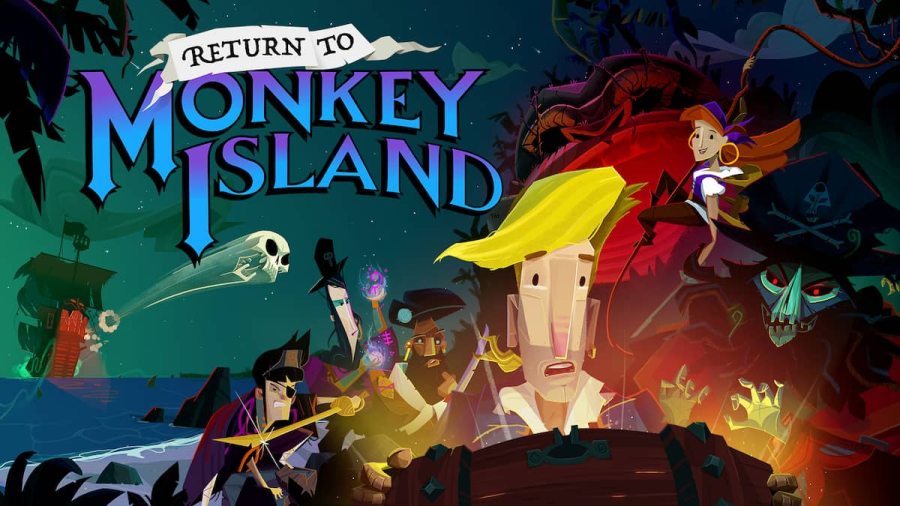 Monkey Island is one of the most famous point-and-click franchises in gaming history. Although there are six games in total, most fans point to the first two entries—The Secret of Monkey Island and Monkey Island 2: LeChuck's Revenge—as the "real" Monkey Island games because they were created by Ron Gilbert, the man who started the franchise.

Now, Gilbert has returned after 30 years with the nostalgically named Return to Monkey Island, a direct sequel to MI2, making this the third entry in Gilbert's Monkey Island trilogy. And while I initially feared that I'd be disappointed because of how much I cherish those original games, it appears my worries were misplaced.

The story of this entry hit me straight in the heart. Return to Monkey Island continues Guybrush Threepwood's adventures in the pirate-ridden Caribbean, and he's still obsessed with Monkey Island and its hidden Secret. The difference is that he's now married to Elaine and has a son. The fact that Guybrush is now older and a father has a meta vibe, as developers of the game and many original fans are likely now parents themselves (the original game was published in 1990).

Throughout the game, Guybrush meets many old friends (Murray, the talking skull!), and each one provides a steady dose of nostalgia for OG Monkey Island fans. That said, you'll enjoy the story even if you haven't played the other games. You can always refer to the Scrapbook option in the main menu to learn about Threepwood's previous adventures. Although I've played the older titles, I've forgotten some of the key parts in time. The illustrated book is an excellent resource that eases you back into the story.

The plot itself is simple yet highly effective: Guybrush Threepwood is a wannabe pirate who still dreams of discovering Monkey Island's Secret. On that path, he has to face his old enemy, undead pirate captain LeChuck, who is also after the Secret. But this is only the overarching driver of the game's many memorable beats, like being an undead sailor or cheating on the math exam (yeah, that's a thing among pirates). Most importantly, this entry is yet another hilarious Monkey Island adventure full of witty dialogue and interesting characters.

The atmosphere is one of the reasons I was looking forward to playing Return to Monkey Island. That fuzzy feeling of pure happiness glues everything together, from puzzles to the story. I was hooked from the first scene where you control Guybrushes' son. Maybe it's because of my love for great pirate stories or because I also have a small blond son. I laughed a lot, but more than that, I enjoyed roleplaying as Threepwood telling a fantastic story about pirates to his boy.

As I played the first two games as a kid, this was—in a way—passing the torch to the next generation. I had a son sitting in my lap while I was playing, and seeing him immersed was everything. But that feeling can only take you so far if the game is not funny. Luckily, it definitely is. Return to Monkey Island is a synonym for laughter. I often found myself giggling throughout my playthrough, mostly thanks to the scene-stealing and evil LeChuck. From his meticulously planned yelling at the crew to his diary where he writes about his existential crisis ("is Guybrush my archenemy?"), these gags prove that LeChuck is still one of the funniest villains in gaming history.

That positive spirit is a prelude to a lovely (but at first confusing) Monkey Island ending. Without spoiling anything, I was amazed by how much heart this game has. It's all about the journey in Return to Monkey Island, especially when you know that it took Ron Gilbert 30 years to return to this world of pirates. My advice? Don't speed run this game. Take your time exploring every corner of this Caribbean archipelago.

Puzzles in Return to Monkey Island are often simultaneously funny and challenging. I found myself lost in the forest, trying to read the map just so I could get a piece of wood for a mop. That's a great example of where the puzzle is funny and complex at the same time. Playing Hard mode, I was sure I knew how to read a map, but nevertheless, I was wandering the forest for at least half an hour. It gave me flashbacks of previous adventures where some puzzles were too hard for my taste.

That sometimes made me (rage) quit the game in the old days, but Return to Monkey Island has a modern solution. There is a "Mighty Pirate's TODO list" that contains all tasks that need to be completed to advance the plot. I also held on to a Hint Book for all those "I'm stuck, I quit" situations. The hint system works because it doesn't spoil the fun, nor does it provide the answers straight up. It moreso guides you gently toward the solution.

As with most classic point-and-click adventures that I've encountered, there were a few moments where I thought I'd never find a solution. Luckily, that wasn't a dealbreaker, as I was having a blast the entire time. If you want to enjoy the story and avoid those challenging puzzles, you can also choose to play the game in Casual instead of Hard mode.

Related: How to get the eyepatch in Return to Monkey Island

Now the tough part: longtime fans frowned upon the artstyle before the game's release because it deviates from LucasArts' design. At first, the artstyle did feel a little strange, as I was expecting that old-school design that I adore. With that in mind, the first impression was not great. The visuals look simplified, like some low-budget, animated movie. I wasn't floored by it, but I got used to it quickly because so many other aspects of the game were spot-on. Maybe it was the author's way of making me feel that everything was the same yet different this time around.

Besides aesthetics, artstyle is vital for point-and-click adventures from a practical standpoint. I didn't have problems finding items on the screen, so there were very few instances where I had to turn to good old "pixel hunt." Having said that, an option to switch to a more pixelized, classic looks would have been much appreciated, but I understand it would take a lot of work to create two completely different visuals.

Verdict - A true successor to legends

Return to Monkey Island will not revolutionize the world of gaming, but it's an excellent point-and-click adventure that can stand proudly among the giants that came before it. The artstyle may be a dealbreaker for some traditional players. But if you're a true Monkey Island fan, you shouldn't miss out on this nostalgic and fun pirate road trip. Guybrush Threepwood deserves our support on what is probably his last adventure. So, what arrrr you waiting for, pirate?