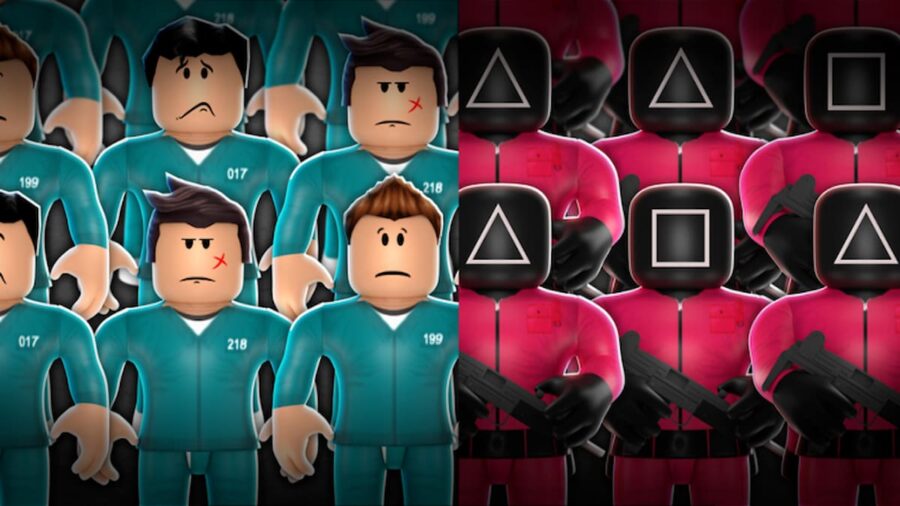 Since its release on Netflix in September 2021, Squid Game has taken over the internet and, not surprisingly, Roblox. There have been numerous uploads and re-uploads of Squid Game-inspired experiences to Roblox, however, none have taken off quite as much as the one created by development group Trendsetter Games. Their experience, titled similarly to its Squid Game counterpart, takes players through an impressive five out of the six games featured in the original show and executes them in a way that players new and old are consistently intrigued by.

In this guide we'll be briefly showing and running through the five games featured in Roblox's most popular Squid Game experience.

The first game that players encounter in the Roblox adaptation of Squid Game is the same first game that the characters face in the show—Red Light, Green Light. The goal of this game is to make it from one end of the room to the other within the time limit and without being spotted by the large, menacing robot doll. When prompted with Green Light, players can make their way across the field. When prompted with Red Light, players will need to instantly freeze all movements.

Those who successfully cross the room without being detected are the winners and are able to proceed to the next round, whereas those who are detected during a Red Light prompt are shot and removed from the game.

The second game in this experience is the Honeycomb game. In order to survive players will need to carve out their designated shape without going outside of the pre-made lines. If you're able to remove your honeycomb in one piece, you will win and move onto the next round. If you go outside of the lines and crack your honeycomb however, you lose.

This game is the one that comes with the most frustration as it rests solely upon the effort of your teammates. To succeed in this game your team will need to click a button that appears on their screen as fast as they can—the team that is able to click the fastest, and remain the fastest, wins. There's no guarantee that a team will lose this game and be removed from the game, it is possible to get an even amount of clicks on both sides, however, it's rare.

Even more frustrating, it's possible for some of the losing team to survive while others fall to their deaths. If you're placed at the front of the rope and your team is losing, there's a chance that you will be pulled off of the edge while your teammates at the back of the rope will live to see another game.

Related: How to get Tusk in Roblox A Universal Time (AUT)?

This is where the Roblox experience differs from the show—in the show the glass bridge is the second to last game and marbles is the third to last game. But in Roblox, these games are flipped. Regardless, the glass bridge is exactly as it sounds—a bridge of glass that players will need to jump across. The catch: only one panel of glass per section is strong enough to hold the weight of a person, or in this case, a Robloxian.

The final game in this version of Squid Game is the marbles game. To successfully win this game you will need to guess if a computer has an even or odd number of marbles in its hand. Each time that you guess correctly you will receive one marble from the computer. But each time that your guess is incorrect, you must hand over two of your own marbles to the computer. If you have one or more marbles at the end of five rounds you will win this game and be taken back to the dormitory room.

While it's not necessarily a game, it is worth mentioning that in between games players have the opportunity to equip and hit others with baseball bats. If you are fully knocked down by someone during this free period you are still considered a dead player and will be removed from the game, so either hide, form your team, or attack!

For more Squid Game Roblox content, check out our guides on how to Solve the Glass Bridge Pattern in Roblox Squid Game, What is Squid Game and how to play in Roblox?, or our code list here!

How to drop items in Roblox?

How to get the Virtual Pro Gamer Backpack on Roblox? | Verizon Up Exclusive Reward

How to get Tusk in Roblox A Universal Time (AUT)?