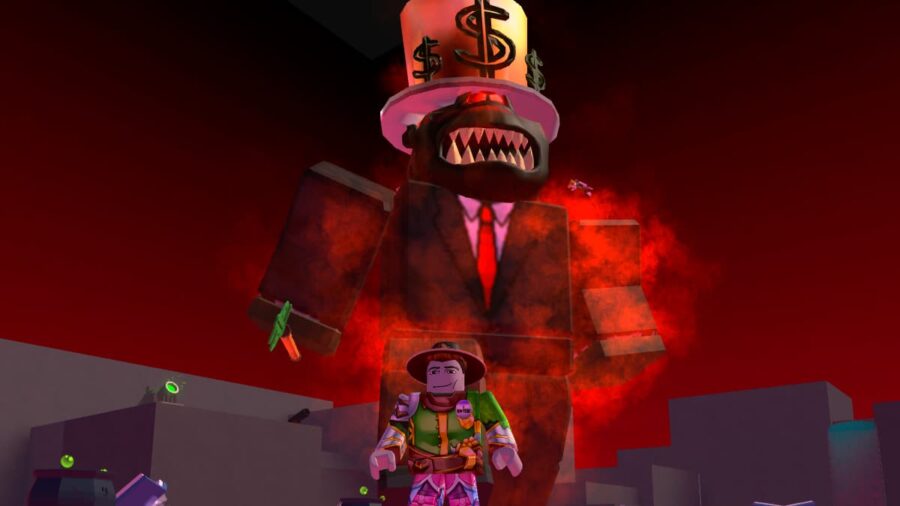 Gems let you purchase premium ingredients, cauldron skins, and consumables from the Shop in Roblox Wacky Wizards. All of these items normally cost Robux to acquire, so being able to purchase Shop items with in-game currency is a great free alternative. There are two ways to get gems in Roblox Wacky Wizards: by defeating Mr. Rich (the Cyclops boss) and completing the daily Witches quest.

Defeating Mr. Rich always drops a Cyclops eye, which is exactly what you need to get free gems. If you pick up the Cyclops Eye and bring it over to Oz the Wizard, he rewards you with 20 gems. This can only be performed once per day, so it will take quite a while to earn enough gems to purchase many of the Shop items.

Note: Oz won't give players gems during the first Cyclops Eye exchange. Rather, he will award players the Robux ingredient, Once this ingredient is acquired, Oz will grant 20 gems per day, going forward.

Instead of Mr. Rich, there is a small chance of Mr. MEGARich spawning in his place. He is a much more powerful version of Mr. Rich. If this occurs, players will be awarded gems for defeating Mr. MEGARich.

Each day, Glenda the Witch will task players with collecting secret ingredients that are hidden around the map. These are the same ingredients players sought after during the Witches Brew ingredient quest: Jellyfish Bat, Blue Frog, Lava Flower, and the Cactus Cat. Talk to Glenda every day to collect these ingredients for her and she will reward players with gems.

Where is Oz the Wizard?

Oz the Wizard can be found within a hidden cave, specifically the one with green shrubs covering the entrance (see image below). This cave is located near the tall tree obby where you get the Bird ingredient, and it is also near the concrete landing strip by the ramp. When you've reached the cave entrance, just run through the green shrubs to pass on by.

Once inside this hidden cave, Oz the Wizard hangs out in a small hut where he is always eager to award you 20 gems per day in exchange for a Cyclops Eye.

Where is Mr. Rich?

The Mr. Rich cyclops boss spawns in the overworld every hour. When the timer hits zero, the world turns red and a giant boss invades, so it is pretty tough to miss out on the fight. The timer can always be found near the waterfall counting down to zero.

Defeating Mr. Rich mostly requires the effort of the entire server, as he is pretty powerful. To knock down his health, you must brew explosive and hot potions. Brewing this recipe: Dynamite + Chilli creates an Explosive Hot potion, which should cause more damage to the boss.

After brewing the potion, run to the cannon in the middle of all the cauldrons and place the potion inside. The cannon will do the rest by automatically aiming down Mr. Rich. Be careful of Mr. Rich's attacks, however, because he focuses his sights on the player causing the most damage. His attacks are pretty easy to avoid if you always keep an eye on him.

How Well Do You know Roblox Tower of Hell? Quiz

How to Change Your Appearance in Roblox Demonfall