Our Speed Champions Codes has the most up-to-date list of codes that you can redeem for coins and gems. These codes will give you a nice boost and get you ahead of the game if you're just starting out or help level you up faster if you've been playing for a while!

It's a very simple process to redeem your codes in Speed Champions. Look on your screen for the Twitter icon on the left. Hit that button and you will get the following pop-up: 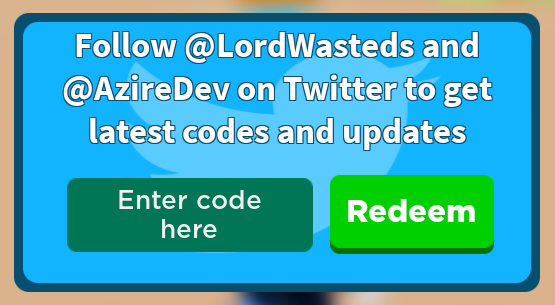 Click on the area that says "Enter Code Here" and enter one of the codes from below. Once you've got it entered in correctly, you'll just need to hit the Redeem button and you will be given the reward!

Here's a look at all of the currently available codes in Speed Champions, as well as some you might have missed out on. Make sure to check back often because we'll be updating this post whenever there's more codes!

Here's a look at all of the Speed Champions working codes.

If you're just starting out, make sure to grab the pets first and equip them. Once you've equipped them, then use the coins and gems codes because you'll get an increased amount due to the multipliers. If you've been playing the game at all and already have pets, you won't really need the starter pets because they have relatively low multipliers.