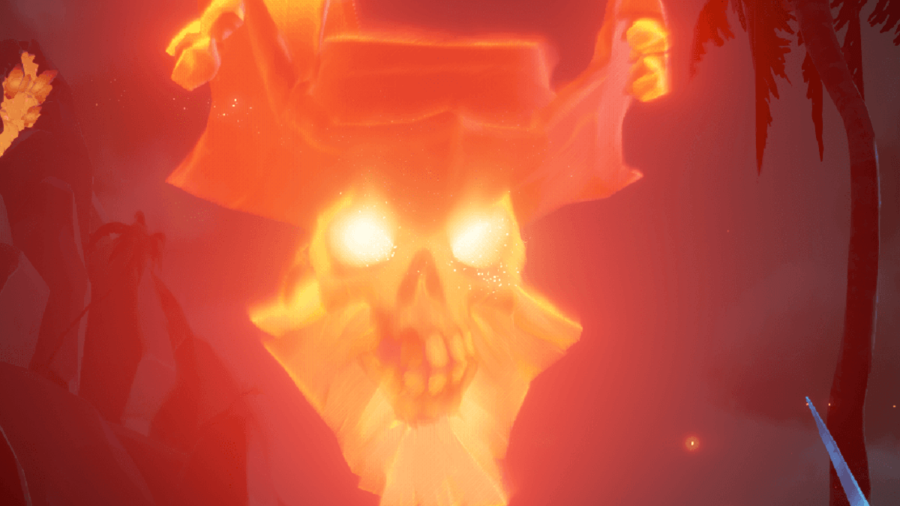 In the previous sections of this guide, we covered how to find the skulls of Martha Jane and Randal Stone. This section will explain how to pursue the final ship, the Ashen Dragon, and find the Ancient Skull to finish up this Tall Tale. You'll be in for a battle once you grab the Ancient Skull, so be sure you're stocked and prepared!

Now that you've found the first two skulls, you will receive yet another page in your Quest Book that hints where you need to go. This time, the hints won't be in the text but in the image itself.

Step One: Pick up the Trail 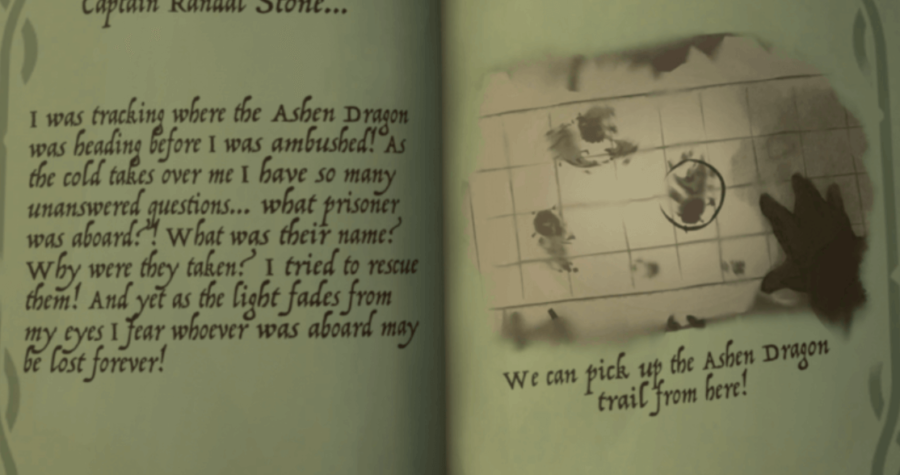 The image above provides an example of what your book might say. There are several options for where you might need to start this final part of the journey, but it's easy to determine from the map. The image the journal provides is an overhead view of an island, and you can go to the one circled to see the first ship's spirit that you need to follow.

As you follow this ship, follow the same pattern you did when you followed the other two. Look where the ship's bowsprit is pointed when you get close, and you'll see it leads to the next one.

While there is any number of islands you may start from, you will always end on the same island: Flintlock Peninsula. As of now, it's undetermined whether or not you need to follow the ship's path prior to going there, so we would suggest doing it just to be safe.

When you finally make it to Flintlock Peninsula, you will notice a key difference between this ship's final location and the others: It's still floating! The Ashen Dragon managed to fend off its attackers and reach the island to bury their leader. You'll no longer be chasing ships with your Enchanted Lantern; now, you'll be following the (literal) footsteps of skeletons carrying their leader's sarcophagus.

Similar to the boats, you can find each next batch of footsteps by paying attention to which direction the one you've found is facing. Eventually, you'll be led down to a vault, and you can grab the final skull! First, you'll approach the casket and open it. Inside is the skull, which you must remove from the body.

Now that you have the skull, you can head back to your Ship. However, as you exit, you'll find things aren't as easy as they seemed. A Skeleton Captain will appear and instruct her crew to stop you from taking the skull. Place the skull in a memorable spot, then fight your way through them!

The plus side about this battle is that the boss isn't like other boss battles in Sea of Thieves. She might be a bit more difficult than other Skeleton Captains, but she's nothing compared to the likes of Briggsy and Graymarrow. As long as you were well equipped before you began following spirits, you should be able to handle this battle easily.

Step Four: Give the Skull to Pendragon

This is the final step to the Tall Tale. When you hand over the skull to Pendragon, he will perform the incantation one last time to free the soul. Things, again, are not as they seem! It is revealed that the Ashen Dragon was not meant to imprison the soul inside the skull. Watch the in-game cutscene here to learn the truth about one of the game's most nefarious villains — Captain Flameheart!

Once you finish the cutscene, you've completed the Tall Tale! You will receive The Seabound Soul Commendation for your efforts and another tick off the list of stories to complete. From here, you have several options. You can do it again for the money, the Commendations, or to pick up any Hidden Journals and Ashen Artifacts you might have missed. If you're feeling brave, you can move on to the next Tall Tale on our list: Heart of Fire!

Have you completed the Cursed Rogue Tall Tale? Did you get all the Commendations? Use our guide to start it over and find the stuff you missed!