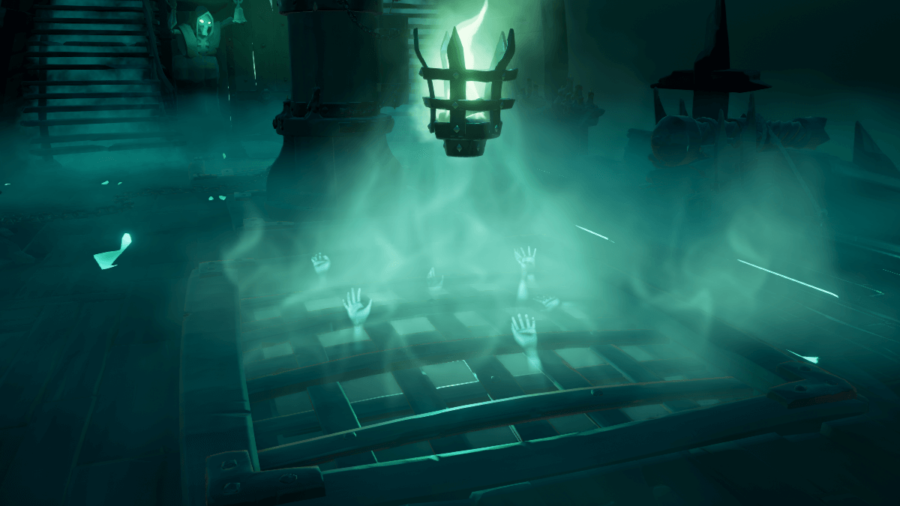 In the previous section of the guide, we covered How to Find the Enchanted Lantern. From there, the story branches off into two different possible islands: Old Faithful Isle or Kraken's Fall. This part of the guide outlines how to follow the souls of the departed on Kraken's Fall.

Before we begin, you will need the Enchanted Lantern to complete this portion of the guide. If you haven't, then you can find the link to that part of the guide below. If you were instructed to go to Old Faithful Isle to investigate the fate of the lost pirate souls, then you can also find the link to that guide below. Finally, if you want to start looking for the Hidden Journals, you can once again use the correct link listed below.

If you're still reading, you are trying to understand how to use the Enchanted Lantern to continue the story or want the exact locations of the Skeleton Keys and Chests. If you want the guidance without spoilers, continue reading Step One - Option One below. If you were just looking for the locations and don't mind spoiling the story, skip ahead to Step One - Option Two.

Step One - Option One: How to Find the Chests and Keys

As you investigate on Kraken's Fall, you'll find that these pirates' souls did not wander off to avoid the Ferryman. Instead, they were ambushed just before their deaths, and it's up to you to follow their final minutes and find out what happened to them.

Without being too descriptive (to avoid spoilers), you will need to find Chests and Keys to finish this story. There are three souls to locate, and each one has its own Chest and Key. So in total, you'll be looking for six objects on the island. 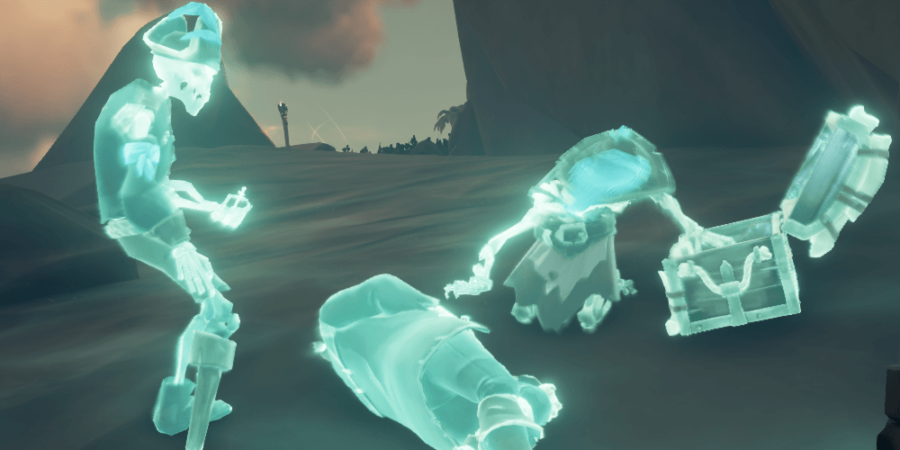 It's best to start your investigation on the northern beach. Light your Enchanted Lantern as you walk onto the beach and you will see short fragments of scenes similar to what you see above. As you follow the flow of events, you will see the results of this ambush and be forced to follow the footsteps of everyone involved in the raid.

The previous part of this guide offered tips for you to follow to uncover the truth. Here they are again, in case you forgot them.

Some of these paths can be difficult to follow or understand. If you are struggling to find them (or you're just impatient and want to get the Tall Tale over with), you can continue reading into Step One - Option Two to see the exact locations of the Chests and Keys. 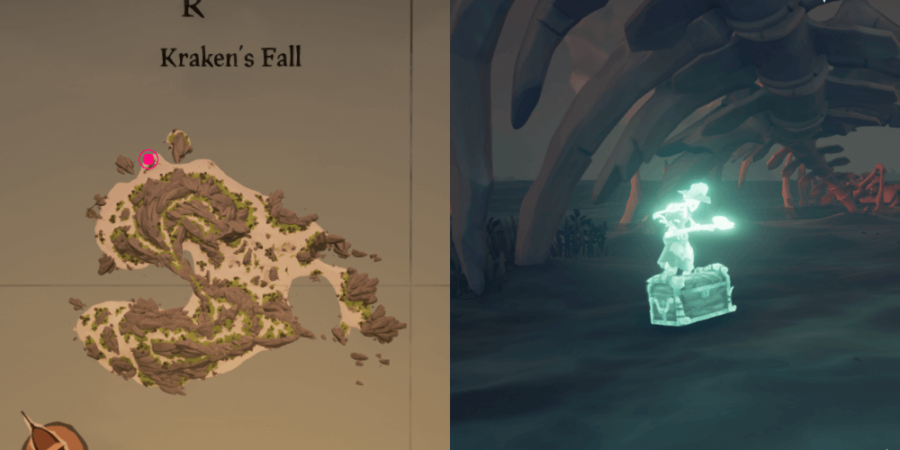 If you follow the path to Dinger's death, you will eventually come to a scene where the skeletons trap his soul in a chest. They then split up, one with the Skeleton Chest, the other with the Skeleton Key. The one that takes the Chest heads North, all the way up to the top of the island. It hides the Chest underneath the Kraken skeleton on the northern beach. 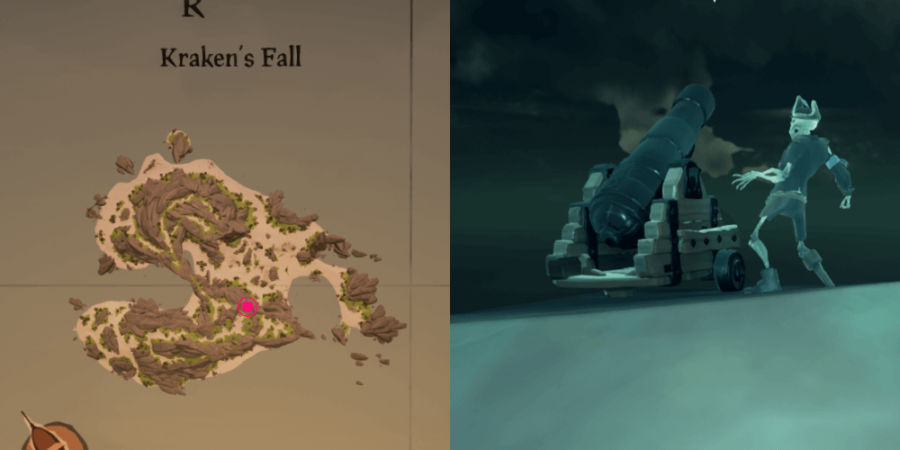 Dinger's Key is thrown into a cannon and fired into the sea! The image above shows the cannon's location that fires the Key, not the location of the Key itself. Line the cannon up with the same direction and angle that the skeleton did. It should land you pretty close to the same spot. If you're a little bit off, you should still see the Key's glint in the sand underwater. 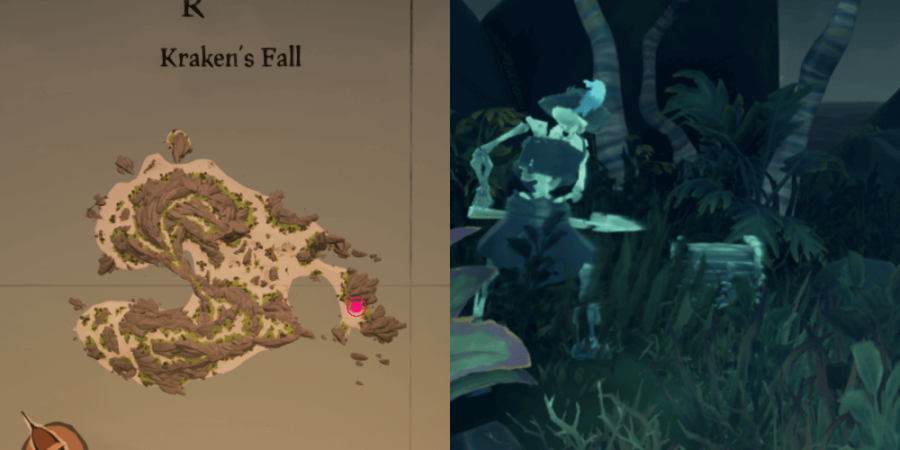 Eli died at the hands of the skeleton captain. If you pay attention to the spot that he died, you'll notice a map on the ground. The X on the map marks the spot of the Chest's location on the island. You can try to locate it from that map or simply use the map and the image above to find it. It is just East of the bay on the eastern half of the island. Use the Enchanted Lantern to see the skeleton burying it. 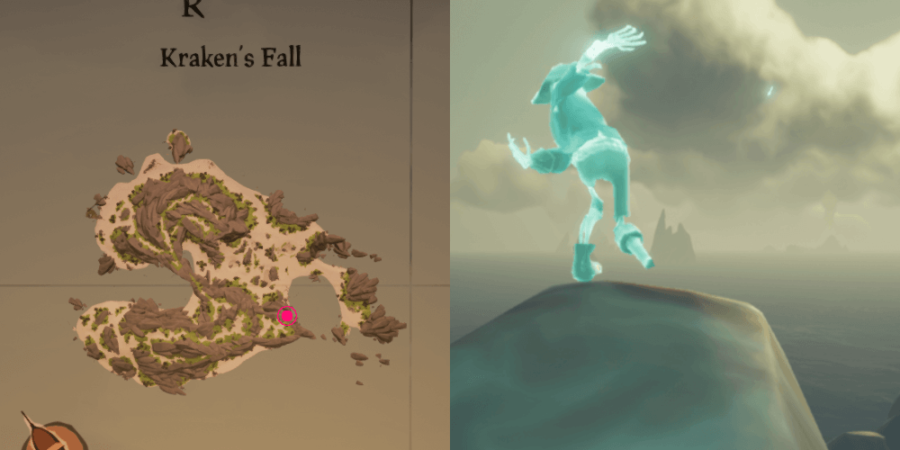 Eli's Key is thrown into the ocean after he is slain. You can follow the skeleton's footsteps to a rocky ledge and observe him throwing the Key. The image above shows the approximate location of where the skeleton was when he throws the Key. You can jump from the ledge it was thrown and easily spot the glint underwater.

Fontaine's Chest is arguably the easiest one to find. When you pursue her final footsteps, you'll eventually come to the point where the skeletons trap her soul in the chest. The Chest is hauled North. You can find the scene where it is buried at the base of the arch, near the location of the island's Vault door. 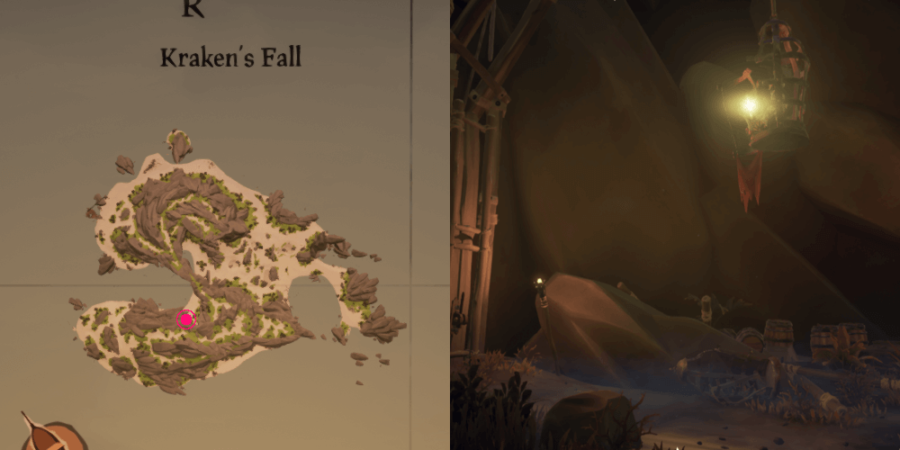 The Key for Fontaine's Chest is hidden in a cage trap. If you followed the footsteps, you would end up at a lever. Flip the lever near the cage, and it will cause it to descend, making the Key within reach. This cage and lever should be in a small alcove at the island's base, just south of the archway above.

Related: How to Get the Ritual Skull in Sea of Thieves - Pro Game Guides

Step Three: Open the Chests and Return to the Ferryman

Once you have all three Chests and all three Keys, you can use the Keys to Open the Chests. When you see what their purpose was and reveal the fate of the lost souls, you will be ready to return to the Ferryman and complete the Tall Tale!

Unfortunately, this means you have to die. AGAIN. Meeting the Ferryman is a more poetic way to describe someone's passing, no?

That's the end of the guide for this Tall Tale! If you searched for the locations of the Chests and Keys yourself, you might have noticed that it took about as long as the other Tall Tales, but with far less battling and no riddles. Once you complete it, you'll receive the Fate of the Morningstar Commendation! From here, you have one of several choices. You can do the quest again, find the Hidden Journals, or move on to the next Tall Tale: The Revenge of the Morningstar!

All Sea of Thieves Beard Errors and How to Fix Them

How to get Ancient Coins in Sea of Thieves