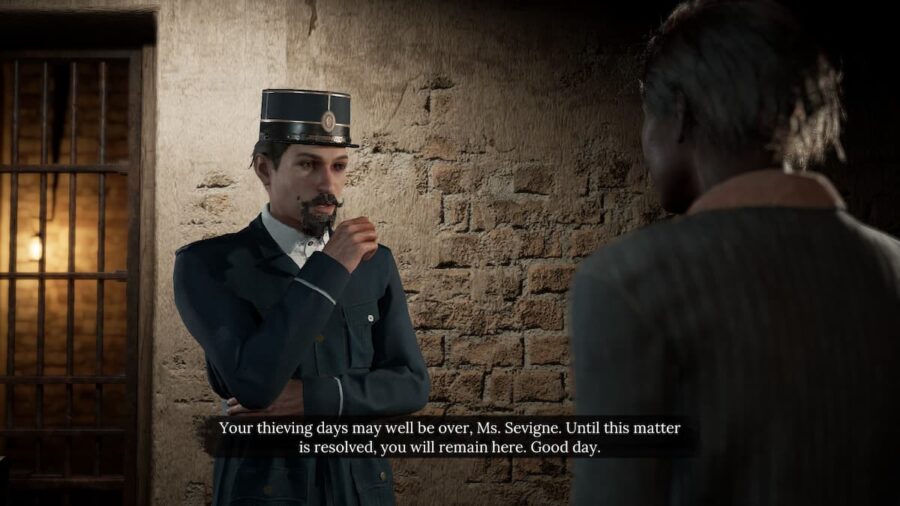 Between your cases in Sherlock Holmes Chapter One, you will find many delightful side-cases in Cordona to keep you sharp and help you earn a couple of bucks on the side, too. To pick up the Iron Coffin case, you must have completed the story case The Muse From Abroad. You can find Iron Coffin anytime after that case by eavesdropping on two people in the Police Station.

Related: How to Solve The Muse From Abroad Case in Sherlock Holmes Chapter One

To get the Lawful Neutral achievement and win another Jon Challenge:

Once you're disguised, head past the archives to the station's holding cells downstairs. You'll find one of your suspects, Basilio Copello, waiting for you in a holding cell.

When you speak to him, make sure you choose "I'm an honorable cop" for the achievement later. Observe him and choose to profile him as methodical. Listen to his side of the story and exhaust all dialogue options.

Now head up to question his wife, Augusta Copello, who can be found in the inspector's room, just across the hall from the archives.

When prompted, speak to her and choose to lie about your identity—respond with "I'm new" to begin your conversation with Augusta. Observe her and choose to profile her as shocked before exhausting your dialogue options and moving on.

After you've talked to the Copellos, head to Armour Copello located on Adler St, just east of St. Clement's Cathedral.

Enter the business and investigate some minor clues in the main room, which can be found on the front desk and a painting in the corner. Now speak to Billy Lloyd by the front desk—exhaust your dialogue options with him and head upstairs.

Here's where you'll find the body of Nicolo Detti. Proceed to examine the body to find all of the clues (head trauma, substance on mouth, bloody hand, belt, blood on the safe door), then turn around to examine the table by the fireplace. You must move the camera downward to find the third clue, a hidden wine glass.

Billy will appear in the room at this point, but don't speak to him just yet. Head through the door closest to the fireplace to find the Capellos' office. Examine both desks and find all of the clues, be sure to grab the keys off Basilio's desk.

Now open your casebook and start a chemical analysis on the Examination of Nicolo Detti's Body (solution below).

Note: This solution was specific to our playthrough. Depending on how far you've progressed in the main story, you may have to find a different solution to this chemical analysis.

Billy will appear in the office after you've investigated both desks. Speak to him once you've gathered everything and provide him with the following evidence:

Now, pin the clue Armour Copello Burglary and exit the backdoor, located in the Copellos' office. Once outside, you'll find three areas to scan with your Concentration Mode:

After you've scanned the grass, you'll be able to interact with a lockpicking kit that's been unused. Keep the Armour Copello Burglary clue pinned and head to the Police Archives. Search property Crimes, instruments of crime, and Grand Saray.

Now pin the clue Thinning the Ranks and look for two gang members on which to eavesdrop at the intersection of Clay St and Bridge Rd in Miner's End. Interact with the icon above their heads and choose to keep the following phrases:

Now equip your best Beggar's disguise and head to the marketplace in Miner's End. You're looking for The Pipe, who will be found in a blue shirt next to a vendor.

Speak with The Pipe and tell him that you have information. When prompted, tell him "there is no attack" for a much easier fight when you enter the Backyard Boys' Hideout. After the conversation, you will unlock the Friends in Low Places achievement and win the Jon Challenge Thinning the Ranks.

Related: What is the reward for finishing all Bandit Lairs in Sherlock Holmes Chapter One?

Don't forget to equip your Police Officer's disguise after speaking with The Pipe if you're gunning for the Lawful Neutral achievement. Head to the Backyard Boys' Hideout (location below) and enter the front door, where you'll have to fight a few waves of enemies.

After you've dispatched the enemies, a short cutscene will trigger and you will automatically find yourself back in the Police Station Holding Cells, where you can interview the final suspect, Felicia Sevigne. Speak to and observe her—profile her as prepared and exhaust your dialogue options as you see fit.

With all necessary evidence gathered, head back up to the inspector's room to confront the killer—Augusta Copello. Speak with her once and exhaust all options. Immediately speak with her again to accuse her with the following evidence, in the following order.

After providing the evidence, Augusta will confess. You will then earn the Lawful Neutral achievement, win the Playing the Law Jon Challenge, and officially complete this case.