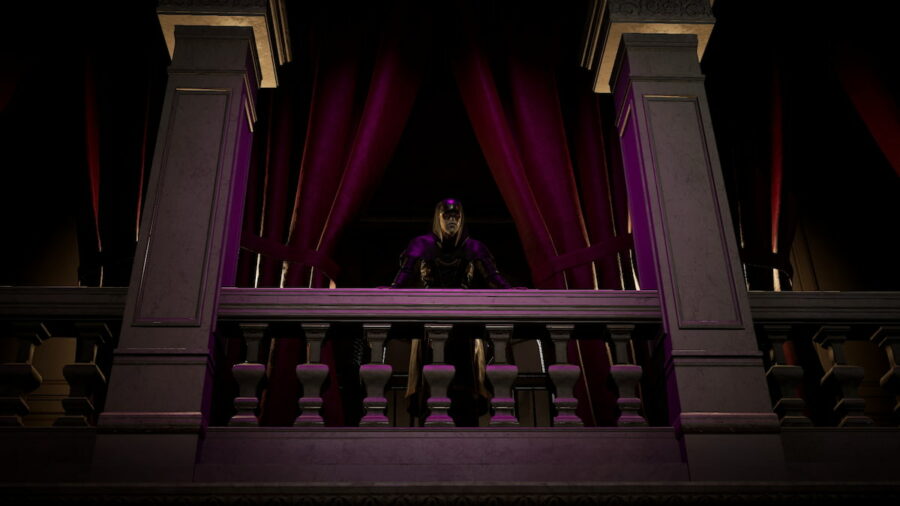 After you've unlocked and fully explored Violet's cabinet of curiosities in the Stonewood Manor, Jon will point out that something has been left for you near the front door. To begin Sacrificial Lamb, interact with the mysterious package containing the cloak, mask, and letter.

The letter from Vogel invites you to Kurt Manchios' Mansion and advises you to wear the cloak and mask to enter. Head to Turquoise Ln in the northern part of Grand Saray—you'll find the mansion at the top of the street, marked with red streamers outside.

Equip the cloak and mask provided by Vogel and you'll have no trouble entering the mansion, where you'll find a masked party for the rich citizens of Cordona to let loose with debauchery without fear of consequence. Upon entering, Jon will challenge you to learn more about the masked party-goers.

To complete this challenge, you need to find two sets of partygoers to eavesdrop on. The first can be found in the main hall, off to the side.

Interact with the ear icon and choose to keep the following phrases:

You will find the second set of people to eavesdrop on behind a curtain inside this room marked with red light.

When eavesdropping on them, choose to keep the following phrases:

After you've successfully eavesdropped on both sets of partygoers, you will complete Jon's Yellow Press challenge. Now move to a room marked with purple light to trigger a cutscene with Vogel.

A long philosophical conversation will ensue. Exhaust your dialogue options as you see fit, and it will lead to Vogel giving you a key to the "altar room."

You'll find the door to this room in the main hall, just past two small libraries on either side.

Enter the altar room and you'll be immediately greeted by the sight of a dead body. Investigate the surroundings and then examine the body to find:

At this point, Vogel will appear behind you but don't speak to him just yet. Instead, move behind the makeshift stone walls to find a dressing room. Enter it and look immediately to your right to find a closed wardrobe—interact with it and you'll find a bloody cloak.

Examine the dressing tables inside the room to reveal the name of the victim, Fabio, and learn more about the facade they usually put on for the partygoers pleasure. Move to the back of the room and examine the sink and wardrobe of clean cloaks.

Now move through the door right behind you, and it will lead you into the smoking lounge. Move to the other side of the room and examine the table to the right. You'll find some bloodstains on the floor and a bottle of wine that's also stained with blood.

Now pin the Smoking Lounge evidence and examine the room in concentration mode, particularly around the doorway to the altar room. You'll find more blood stains and evidence that Fabio was attacked here, and finished on the altar. Go and speak to Vogel and exhaust your dialogue options.

You should now have enough evidence to reconstruct the scene. Interact with the node in the Altar Room to recreate the scene as follows:

To progress, you'll have to make some deductions in your Mind Palace. Link the following clues together:

Speak to Vogel again. When prompted, ask him about the murderer's key. After a conversation, he'll direct you to Kurt Manchios, who can be found holding a drink in the center of the main hall, wearing a mask with golden stars.

Speak to him and exhaust the dialogue options. An amusing cutscene will ensue as the police burst in and arrest everyone.

Now you'll be seated in an interrogation room, speaking with the Police Constable, who will eventually recognize you as Violet Holmes' son. He'll let you go and allow you to finish this case as a consulting detective.

Examine the documents on the table, then head to the end of the hall to speak with Vogel. He'll ask you if you'd lie for him or not and your answer won't have much significance. When prompted, show him the witness deposition to end the conversation.

You have two suspects to interrogate for now: Manchios and Matista. Before speaking to them, head to the evidence room on the other side of the Police Station.

Speak to the Officer there and hand him the evidence ticket for the case. He'll show you three boxes containing the belongings of Vogel, Manchios, and Matista. All of the evidence is conveniently laid out for you—examine everything there, return to the holding area, and speak with Vogel about the letter from Fabio.

Now it's time to talk to your suspects. Speak to Manchios, observe and profile him and exhaust your conversation options. When prompted to show evidence, opt for the gifted cufflinks, witness deposition and letter to Fabio to finish with him for now.

Move across the hall to speak with Matista and repeat the process: Observe and profile her and exhaust the conversation options as you see fit. When prompted to show evidence, opt for the occult book, her beliefs on mysticism, and the letter from Fabio to finish for now.

There's one more suspect to investigate. Go into your Mind Palace and link the clues Santos informed the police—Santos is a majordomo.

Pin your new deduction that Santos is a Suspect and head to the Archive Room. Speak with the Constable to suggest that the police bring in Santos Pinchetti for questioning.

The Constable will quickly accommodate your request—you'll be able to find Pinchetti in the Holding Area standing ominously in the shadows of room 7.

Examine the box of belongings on the table then go through your interview process: Observe and profile Pinchetti and exhaust your conversation options as you see fit. When prompted to show evidence, opt for Manchios' Will and Note to finish with him.

Return to Manchios—show him the will to hear his reaction. Now you have all the clues you'll need to pieces this thing together. Go to your Mind Palace now and combine the following clues:

You'll now have a deduction board with five split-deductions and three possible conclusions and you can name any of the three suspects as the murderer.

Related: Who is Jon in Sherlock Holmes Chapter One?

The game doesn't make it truly clear as to who murdered Fabio—every suspect has a legitimate motive in a case that comes down to the smallest details. You're free to break down the evidence as you see fit, but we came to the conclusion that Kurt Manchios is the suspect that murdered Fabio.

Manchios had proper motive and opportunity. His desperate attempts to look young were no longer attracting suitors, and upon having his heart broken by Fabio, his obsessive and controlling personality couldn't handle the rejection. Furthermore, Manchios' penchant for obsessive cleanliness was uncharacteristically ignored when he left soap under his fingernails.

Whichever conclusion you reach, return to that suspect and accuse them. After you've made your moral choice, return to The Constable to report your conclusion and end this case.