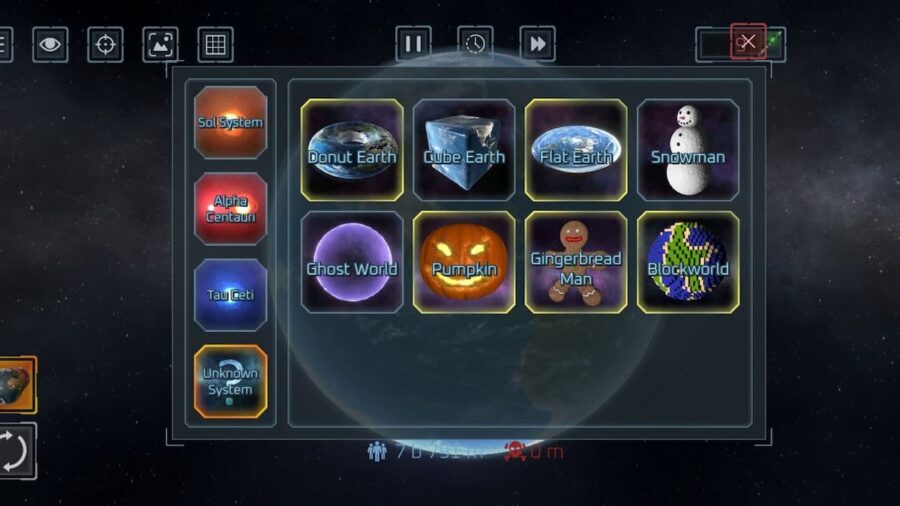 Solar Smash is one of the best mobile games, and it's certainly fun to play with the ear. In Solar Smash, you can unlock a variety of planets, from a flat earth to a gingerbread one. The following is a list of every planet you can make and how to unlock it.

Go to the grid on the upper left of your screen and move the X and Z sliders to the middle. Leave the Y alone. Next, you must unleash all hell on Earth with as much destruction as possible. Most players prefer to use a laser set to 5 because it's easier to control. Once you're done, you'll have a flat disk. You just need to reset the planet from there, and it will become a flat earth on top and a scorched earth on the bottom.

The Snowman earth is pretty easy to do. Grab your freeze ray and cover the entire planet with ice. Reset the planet after the Earth is completely frozen, and you will find the snowman in your planets menu.

Go to the grid on the upper left of your screen and move the X and Z sliders to the middle. Do not move the Y slider. The next step is to unleash as much destruction as possible on Earth. After you're done, you'll have a flat disk. Go back to your grid and move the X and Z sliders left. Using a laser, you can cut a hole into the middle of the disk, creating the appearance of a square donut. All you have to do is reset the planet, and it will turn into a donut-shaped planet.

Go to the grid on the upper left of your screen and move the X, Y, and Z sliders to the middle. Then, you can start blowing up the Earth. The planet will eventually become a scorched cube, and that is when you reset it. Once it resets, it will become a cube planet.

The only way to unlock the spectral Ghost World is to assault Earth with a million blows. Select the purple ghost weapon from the monster tab, then punch the Earth with as many as you can. You've unlocked the Ghost Planet as soon as you see the achievement notification for punching the Earth to pieces!

Related: Best Games like Clash of Clans for iOS and Android

This one is a harder version of the Pumpkin Earth. You can make your Earth into a snowman and then use the Planet Killer on it. You should let the snowman roast in its orange color before letting it through. Slow down the speed after the planet begins to glow orange if you have trouble.

This is probably the easiest planet on this list. Grab one of the green missiles in the upper-right corner of the world and turn it into a cube. Fire the missile at the cube. When the green explosion starts on the planet, reset it. It will then be a Minecraft block world.

Looking for more games that take up time on mobile? Check out our lists of Best Games on Apple Arcade or 5 Mobile Games Similar to Pokemon Go here on Pro Game Guides.

All Secret Planets in Solar Smash – How to unlock