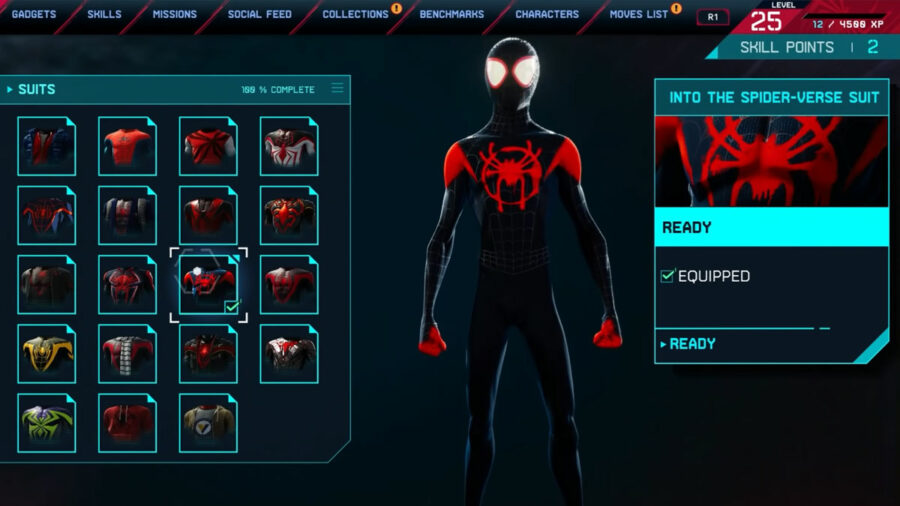 One of the most fun parts of Spider-Man for PlayStation was collecting all of the suits that could be worn by Peter Parker! Now that Mile Morales has gotten his own game, you can engage in the same kind of thing by leveling up and completing challenges. It is no doubt that many people were introduced to this new version of Spider-Man by the Into the Spider-Verse movie that was released and is currently on Netflix. If you are one of those people, then you most likely want to get a chance at grabbing the suit from the movie!

How to get the Into the Spider-Verse Suit

Unlocking the Into the Spider-Verse Suit is actually quite easy! One option is available to you immediately, because you will receive the suit if you pre-ordered the game. If you didn't do that and want the suit, then you can craft it by leveling up Miles Morales. Once you reach level 13 in the game, you will be able to craft the suit, which requires 18 Activity Tokens and 4 Tech Parts to do. No doubt you will likely have collected those by the time you reach level 13, so you should be able to unlock it right away. The suit comes with two different suit mods that you can equip. One is called Vibe the Verse which will allow you to leap into the Spider-Verse and cause the suit to mimic the aesthetic of a different Earth. This sounds pretty weird, but it pretty much makes the game mirror the kind of stuttering animation that is found in the movie. The other mod allows you to add the POW, KABOOM, and BONK! effects after you lay some damage into an opponent. While this isn't going to buff up your character, it's a fun throwback to the early days of comic books!

Be sure to check out this video to see how to unlock every suit in the game: