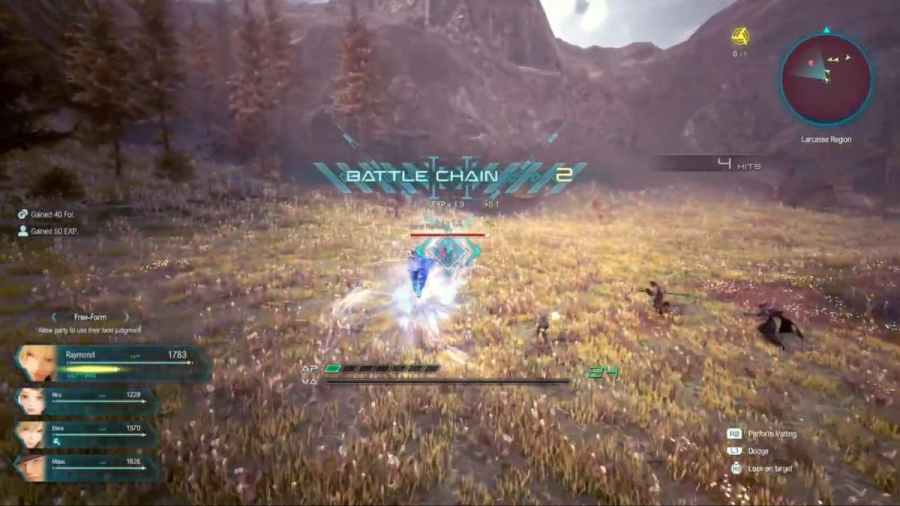 What does a Battle Chain mean in Star Ocean Divine Force?

A Battle Chain in Star Ocean: The Divine Force is a way to earn EXP faster. Battle Chains occur when you surprise an enemy to initiate combat, and by continually surprising enemies, you're Battle Chain will increase, along with EXP gains. This is regardless of whether the fight was in a side quest or main quest.

When you surprise an enemy and start a Battle Chain, the EXP you earn for that fight instantly goes up by 0.x. The number depends on the level of the enemies you are facing. Sometimes you'll get 0.8; other times, it'll be 0.3. So you'll earn 1.3 times the EXP for winning that first fight. Every additional Battle Chain after will increase the EXP gained by 0.1. Basically, if you can keep up the Battle Chain, you can quickly earn EXP in an area.

If your first encounter was increased by 0.3, after seven surprise attack fights, you'd be earning double the EXP earned per fight, with increased growth if you carry on chaining surprise attacks into Battle Chains. If you can do this on higher-level monsters, you'll be farming EXP in no time.

Related: How to get Silver in Star Ocean Divine Force

To make getting Battle Chains easier, equip the Silencer field skill on D.U.M.A, reducing enemies' footsteps detection range—even more so if you strengthen this ability. We believe this also applies to using VA with DUMA, but to be safe, you can always walk to attack foes, but watch out for the direction they are facing as if they can't hear you, they can still see you unless you are facing worms and the like.

Battle Chains only count for the area that you are in. Your Battle Chain will reset if you move to a different location, such as a village or an adjoining area. Enemies in each region respawn relatively quickly, and areas are massive, so wandering around killing everything in sight is pretty easy, as long as you're patient and land that surprise attack.

What is a Battle Chain in Star Ocean Divine Force?