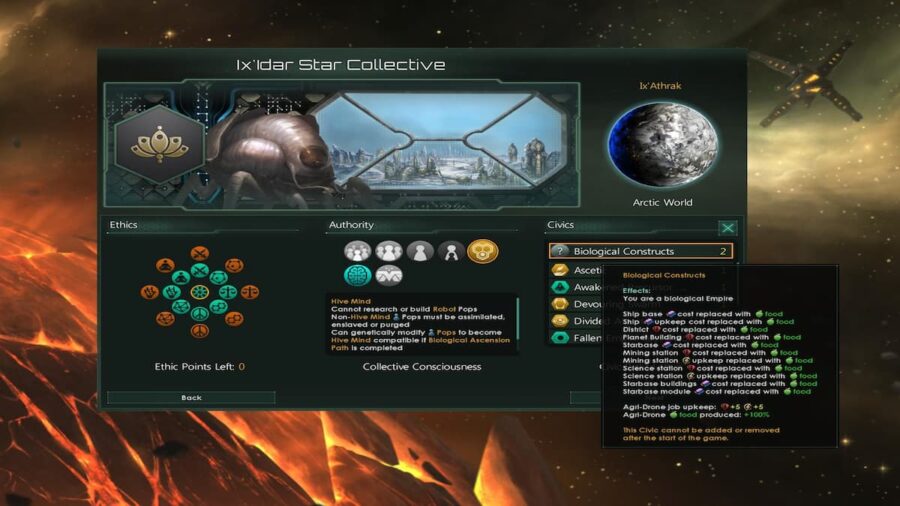 Ascension Perks are the most important part of an empire's formation. They are defining characteristics that fundamentally change the way you play your game. Your entire playthrough could see you shooting towards these Ascension Perks, so it's incredibly important to pick the right one. Here's our choice of the best:

If you’re shooting for technological domination of opposing empires, then Technological Ascendancy is essential. A research speed boost, and a +50% bonus to rare technology discoveries, is the perfect way to create a thriving hyper-advanced empire.

Short and simple, Executive Vigor gives you +2 edict capacity. This sounds minimal, but with this perk, you could have up to six running at the same time, giving you huge boosts to development and growth in your empire.

Related: How to Gain Influence in Stellaris

The Flesh is Weak

With The Flesh is Weak perk, your expensive robot species will no longer cost so much. But most importantly, this triggers the Special Project to turn all populations into cyborgs!

Once you have The Flesh Is Weak, Synthetic evolution makes your robotic denizens even better. You can modify your species more, build more robots, and get more modification points. Ideal for late-game robotic species.

Hive worlds are a must if you’re a Hive Mind civilization. The bonus habitability is huge, and the addition to housing and population capacity means your swarm will grow incredibly quickly with just a few of these.

Machine Worlds are just objectively one of the best terraforming options out there, and this perk gives you them. These planets have no limits on resource districts, +10 to all resources, and more population capacity.

This one is saved for last for a reason. Become the Crisis turns you into a galaxy-spanning problem that everyone else has to deal with or be destroyed! After unlocking host crisis objectives, you’ll be able to spend Menace points to level up your crisis level, gaining new perks all the time. Menace perks are pretty broken, but they also turn you into an enemy of every other faction out there. So this perk is only for experienced players!

Don't want to wait to get your Ascension Perk? Unlock it right away thanks to Pro Game Guides All Stellaris Cheats and Console Commands article.