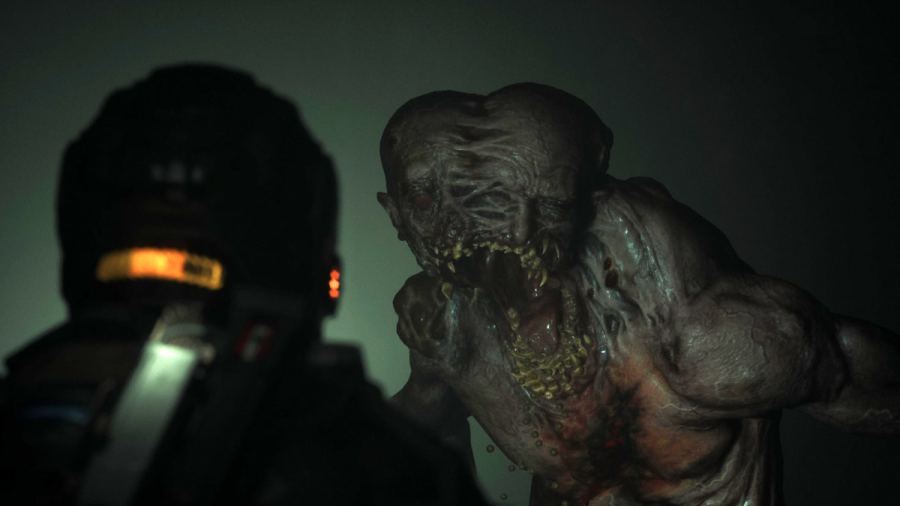 Each Two-Head Fight in The Callisto Protocol

The first encounter with Two-Head is by far the easiest but it still doesn't mean that you will have an easy time with it. Odds are you're already low and ammo and health from the previous swarm. There are a couple of pointers when fighting Two-Head:

Surviving this fight is all about managing the encounter before it. You'll have access to a 3D printer beforehand. Make as much ammo as you can for whatever weapons you have. There will be plenty of GRP batteries on the platform. Grab the enemies as they climb onto the platform and shoot them off the side with the GRP. Avoid traditionally fighting at all costs, as you need these resources for Two-Head.

When Two-Head does show up, keep your distance and lay into it with your guns. You won't really see it taking damage until it switches to its next phase. This is marked by Two-Head dropping to its knees, allowing you to beat on it with your baton. After enough hits, Two-Head will stand back up and rip off half of its body. The second phase of the fight will play out exactly like the first. Keep your distance and pump ammo into the abomination.

Your second go-round with Two-Head will be almost identical to the first. This time, it will bring company. The fight essentially plays out the same, but you'll want to keep some distance between Two-Head and the other enemies. Kill them as quickly as possible, as Two-Head is surprisingly fast and will be on top of you before you know it. There will be boxes of supplies spread around the arena. Keep moving when you try to pick them up. If you miss it, keep moving. Loop around as needed, but do not stop moving.

The third encounter is nearly identical to the second except for it being in much tighter quarters. Keep looping Two-Head, keep plenty of distance between it and yourself, and dump everything you have into it.

The fourth, and thankfully final encounter with Two-Head, decides to pull out all the stops. It comes with friends again, but the friends are the crawling boomers. Use this to your advantage, grab them with the GRP, and fling them back into Two-Head's faces to put it down for good.

How to kill the Two-Headed Abomination in The Callisto Protocol