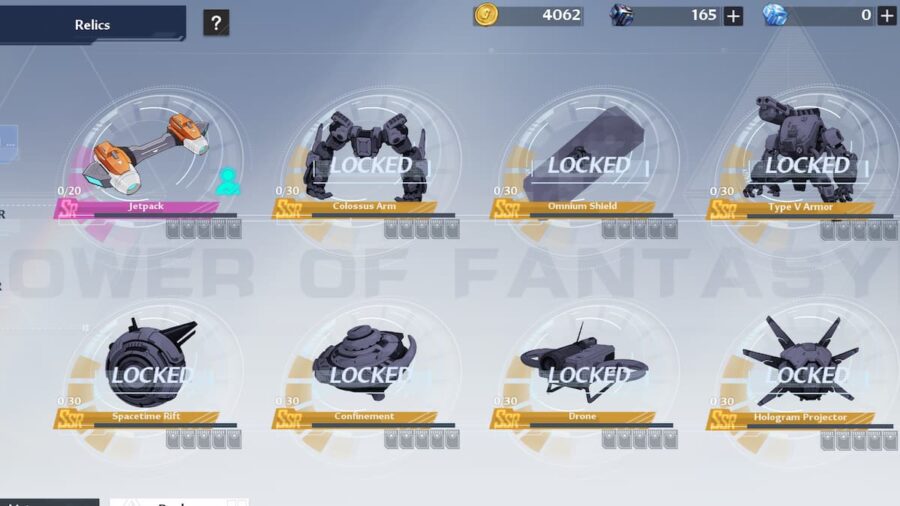 Not only does Tower of Fantasy have a myriad of weapons for you to equip and decimate your foes in style. They also have a selection of Relics you can equip, some for attacking, some for defense, and others for crowd control. If you have purchased the Collectors Edition Pass, you can choose an SSR Relic, but which Relic should you pick first in Tower of Fantasy?

What is the best SSR Relic to choose first in Tower of Fantasy?

Choosing your first SSR Relic ultimately depends on your playstyle and what Simulacra you have in Tower of Fantasy. There are many different functionalities for each Relic. So, getting a Relic that focuses on defense isn't a bad option if you have a solid offensive team. This works in reverse. You may need some much-needed attack power if you have a defensive-orientated team.

Every Relic you can get in the game at one point or another. Whether that is finding the Relic, or acquiring shards to create the Relic.

You have two choices for the best Attack Type SSR Relic in Tower of Fantasy. The first is the Colossus Arms, and the second is the Type V Armor.

If you are going for pure offense and nothing more, choose the Type V Armor. All the upgrades for this Relic are all offensive based. There is no defense at all to be had with this Relic. If you want a portion of defense along with your offense, choose the Colossus Arms. Because the last two star upgrades entirely focus on survivability.

Related: How to get Type V Armor in Tower of Fantasy

Pilot a droid to fight for 30 seconds. Immune to hitstun. Tap again to exit and blow up the droid.

Summons a colossus arm to battle for 20 seconds. Cooldown: 300 seconds. Gain hitstun immunity for the next 20 seconds. Tap the Relic again to cancel

This choice is much harder to choose because each SSR Defense Type Relic has some form of healing or damage increase later on when upgrading the stars. You have two choices for the best Defense Type SSR Relic in Tower of Fantasy. The first is the Omnium Shield and the second is the Spacetime Rift.

If you want to stop all pesky projectiles and slow down enemies that pass through it. use the Omnium Shield, but once you acquire five stars, if you or your allies pass through it you will get a damage increase of 25% for seven seconds, which is nothing to scoff at. The Spacetime rift contains enemies while dealing continuous damage. By increasing the stars, you can increase damage to enemies by 20%.

Related: What does CS mean in Tower of Fantasy?

Generate an Omnium shield that stops projectiles for 10 seconds, with starting energy equal to 200% of the Wanderer's max HP.

Launch a proton bomb at the target location, creating a collapse in time-space that sucks targets in for 10 seconds. After 1.5 seconds, the collapse center deals damage equal to 39.6 of Attack to targets caught in the area every 0.5 seconds.

Which SSR Relic should you pick first in Tower of Fantasy?