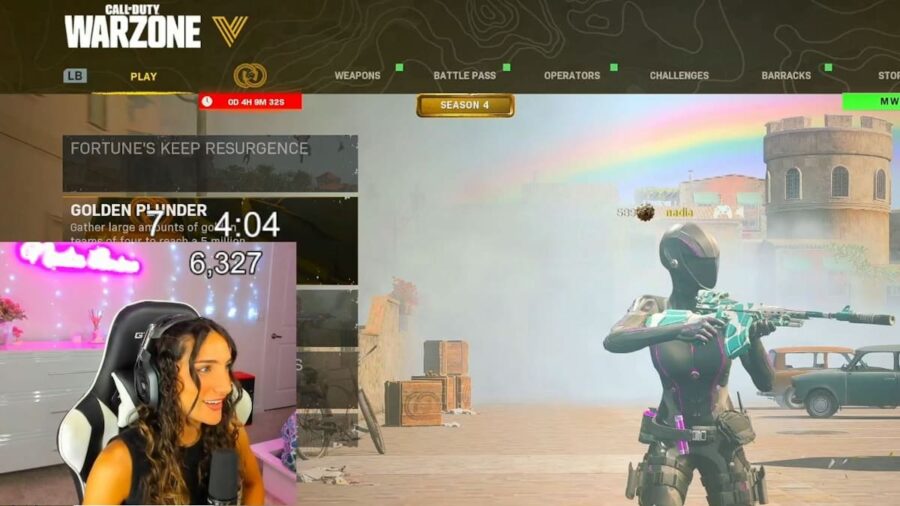 Image via Nadia on Twitch

A rising Warzone player has been making waves on Twitch for her impressive skills and noteworthy match clips. People online have also started making sexist memes about her, much to the dismay of some of the larger players in the eSports community. Who is Nadia and what is going on with her videos being edited into memes?

Who is Nadia Amine on Twitch?

Nadia Amine, known simply as Nadia on Twitch, is a streamer mostly known for playing Call of Duty: Warzone on Twitch. She has 185,000 followers on Twitch with an average of approximately 85,000 views per stream. On COD Tracker, it lays out that she has a K/D Ratio of 2.05, which puts her in the top 2% of Warzone players. Amine also has 332 wins under her belt, which places her in the top 0.4% of others playing Warzone.

What videos were people making about Nadia?

There have been numerous video edits made from Amine's original Twitch clip, as Jake Lucky shows on his Twitter account. In the original video, she completes a chaotic match of Warzone with numerous impressive plays and a victory under her belt. She makes the statement to define this clip, "This clip right here proves why I am the best female Warzone player," which is where the edited videos then replace the Warzone footage with different games. The memes typically leave out any of the prefaced footage and start the clip with her boastful statement.

The problem comes in with the types of games people online have been placing in the clip. Mostly they have been online flash games that are stereotyped as traditionally feminine, with activities such as dishwashing or applying makeup. There have been other videos using a variety of her clips that have a similar style to them. The implication in these videos is to replace the footage with a game that they feel lacks skill and male interest. Many online have felt that these memes have an explicitly misogynistic tone to them.

Related: How to play a random clip from streamer when raided on Twitch

What are people saying about the Nadia Twitch meme?

Amine has been met with support by many other streamers and professional gamers, such as FaZe Rug on Twitter. A majority of those online criticizing her and the condemnation of the memes say that they are just jokes. They feel that the memes should not be taken so seriously, but counterarguments state that they are sexist and reductive to the gaming community's image.

Support of Amine seems mostly widespread, but there are many random pockets of comments sections and videos online that actively go against supporting her. Most of those with general complaints of Amine claim she is either overhyped or using some type of aid to make her appear better than she is.

Nadia's Response to the Twitch meme

On her own TikTok account, Amine released a statement where she clarified she was aware of the jokes being made about her. She says that these sexist memes being made only make her more adamant to show that she is at the top of skilled Warzone gamers. Then, she plays a couple of clips showing her going head to head and winning against professional Warzone players, such as HusKerrs.

The video was met with a mix of support and further criticism. Outside of simply disparaging comments, criticisms surrounding Amine are mostly about her being too prideful in her skills and claims that she is somehow cheating. Allegations of Amine cheating have been unfounded and don't currently seem based off of anything tangible.

Want to read more about Twitch? If so, check out How to delete clips on Twitch (Mobile & PC) or How much are Twitch Bits worth? on Pro Game Guides.

Who is Nadia on Twitch? About Nadia Amine and Warzone Edited Clip