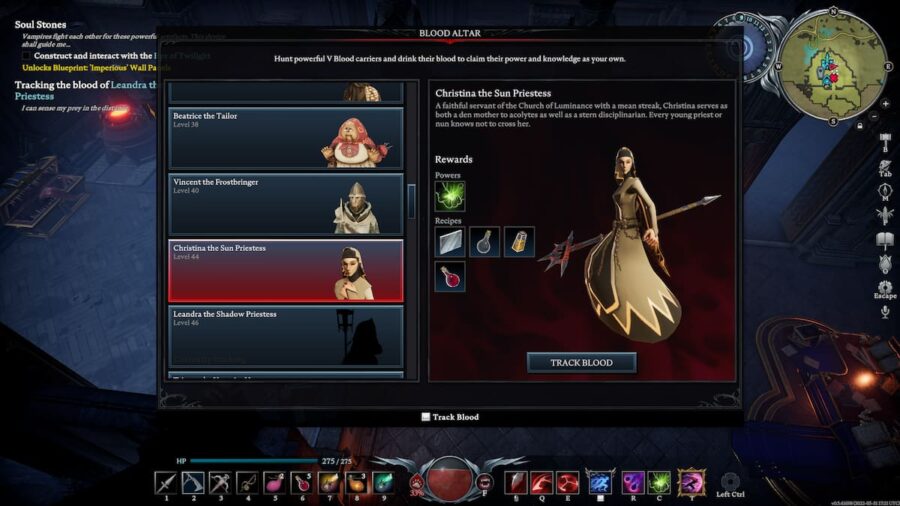 Christina the Sun Priestess is a roaming boss in V Rising. Defeating her unlocks the recipe for Glass, Glass Bottles, and two Potions, making her very important to defeat for players searching for better ways of healing. With her on the move most of the time, it's important to only attack her at night to avoid being stuck in the sunlight on the road. This is where to find Christina the Sun Priestess.

Christina the Sun Priestess can be found in the Dunley Farmlands. She will either be found in Dawnbreak Village or traveling around the area along with two followers. Normally a Rogue and Warrior will be traveling alongside her, however, being on the road there is the chance of running into Brutes, a group of Scholars, or a hunting party. Choosing the right moment to ambush is important as players can make the fight unnecessarily more difficult than it needs to be.

Related: How to unlock Iron Weapons in V Rising

Raising the player's Gear Score to around the 40s is recommended as Christina can be quite difficult to take down. Her damage output isn't as high as other bosses, however, she can heal quickly. If the player's damage output doesn't surpass her ability to heal, she can stay alive for much longer than a night cycle. Iron Weapons are recommended to use and can be unlocked by defeating Quincy the Bandit King.

Where to find Christina the Sun Priestess in V Rising