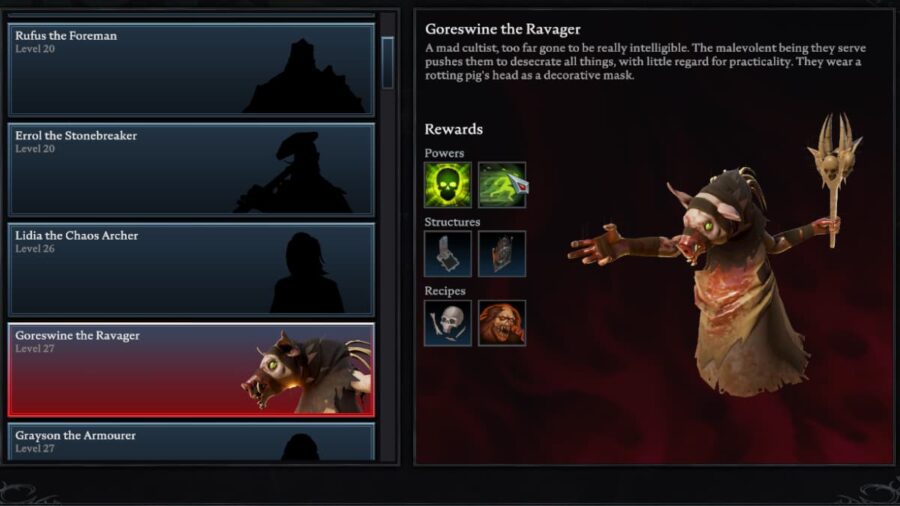 One of the many bosses you will need to fight in V Rising is Goreswine the Ravager. However, finding Goreswine is a bit tricky, but luckily, we figured out where Goreswine likes to hide on the map. You can find Gore Swine the Ravager inside the Infested Graveyard in Farbane Woods. We also found Goreswine wandering around the road south of the Bandit Logging Camp.

But before heading to the Infested Graveyard in Farbane Woods or on the road, you will need to make some preparations. Goreswine the Ravager is a level 27 boss, and so if you are below level, you will have a bad time. That said, we highly recommend raising your Gear Level to 27 or above before fighting Gore Swine. To raise your Gear Level to 27, we recommend making the following set of items in V Rising:

Making the items above will raise your total Gear Level to 27, which will be enough to fight and survive the fight with Goreswine the Ravager. However, going past level 27 Gear Level would be a good idea as even with 27 Gear Level, Goreswine can be challenging to beat.

How to beat Goreswine in V Rising

Beating Goreswine is no small feat in V Rising but is relatively easy if you have beaten similar bosses. In short, Goreswine uses a similar attack pattern to bosses such as Keely the Archer. What this means is that you will need to doge a lot. Goreswine also uses many AOE attacks similar to Keely, so you will want to save your Veil of Blood move from getting out of the way quickly.

Other attacks can be avoided relatively easily by simply moving out of the way. However, all Goreswine's attacks cause Poison damage, so you will want to avoid taking much damage as possible. If you have trouble taking Goreswine out, we recommend bringing a friend or getting another Vampire to help you out. Two decently leveled players will be more than enough to take Goreswine out.

For more V Rising, we at Pro Game Guides have you covered with guides like How Crafting works in V Rising and How to raise Gear Level in V Rising - leveling explained

Where to find Goreswine the Ravager in V Rising