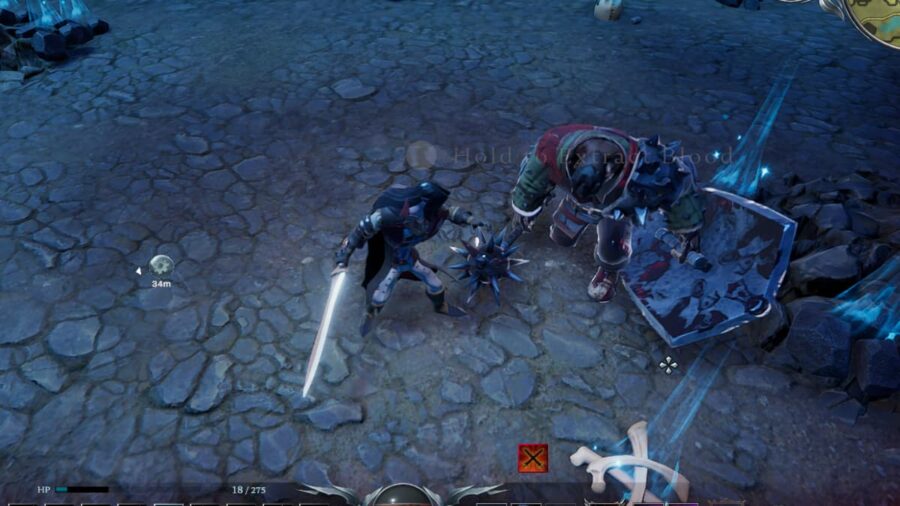 Once you have made the necessary preparations and have done the steps above, you will be ready to fight the Bandit King at the location shown below for the Bandit Stronghold.

How to get a Minor Explosive Box in V Rising

To get Minor Explosives to blow up the Bandit Strong Hold gate, you will need first to kill Clive the Firestarter. After killing Clive, you can make Minor Explosives inside an Alchemy Table using the following resources:

How to get the Bear Form in V Rising

To get the Bear Form in V Rising, you will need to find and kill the Ferocious Bear Boss at the Bear Cave. After killing the Bear Boss, you can use the Bear Form by holding Left Control and selecting it from the Vampire wheel.

How to raise Gear Level to level 37+ in V Rising

Related: How to unlock Explosives in V Rising

How to beat Quincey the Bandit King In V Rising

Beating Qunicey the Bandit King in V Rising is a pain on your own, so we highly recommend bringing along a friend to help you kill them. You should also make a few potions as you will run out of Health quickly if you are not careful. We recommend using the following potions in V Rising:

Once you have some of the potions made, you will be ready to find the Bandit King. During the fight, you will need to watch out for a charge attack he does. The charge attack will do severe damage, we recommend using Veil of blood or Bones to move out of the way. You can also just move to the side if you do it early enough. Another thing to keep in mind is not to get too close for long. In short, the Bandit King has an attack he can do that will stun you.

While you are stunned, he will often follow up with a charge attack, which can destroy you. Because of this, you will need to dodge and keep moving constantly. We recommend using a Merciless Copper Sword, and it's the spin ability between moving and dodging. Combine the Sword with Aftershock and Chaos Volly, and you will slowly melt Quincey the Bandit King's health, eventually beating him.

What is the Bandit Stronghold in V Rising?

The Bandit Stronghold is a mid-level location inside Farbane Woods. The location after killing the Bandit King is best used to farm the following resources:

For more guides on V Rising, we recommend checking out both Where to find Copper Ore in V Rising and How to unlock the Tannery in V Rising here on Pro Game Guides.

Where to find Quincey the Bandit King in V Rising