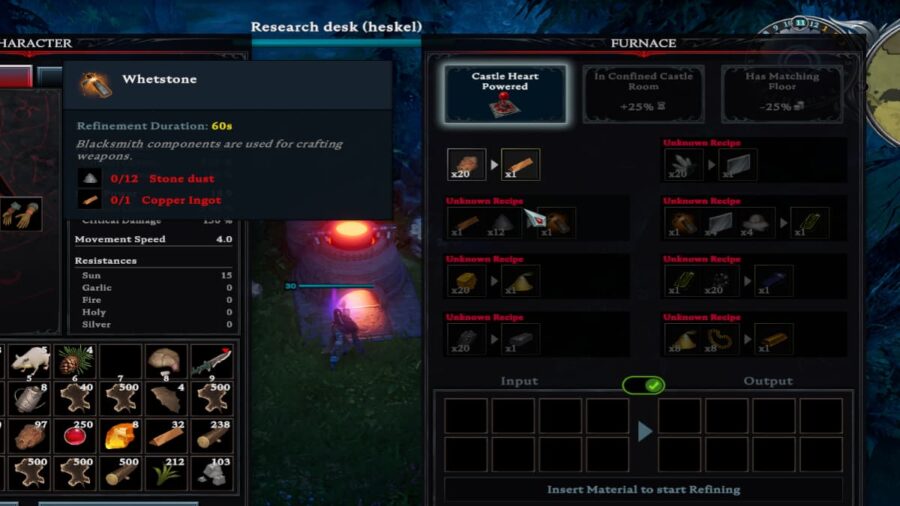 But before you can craft Whetstones, you need to unlock the recipe. So, in the meantime, go with the location-farming route for Whetstones. Locations such as Bandit Strongholds and the Bandit Armory are perfect for farming and finding Whetstones. You can find Whetstones as dropped loot in these locations via boxes, chests, and specific enemies.

Related: Where to find the Alpha Wolf Boss in V Rising

How to unlock Whetstones in V Rising

To unlock Whetstones in V Rising, you will need to find and kill Grayson the Armourer. Grayson the Armourer is located at the Bandit Armory in the location above. Grayson is also level 27, so we recommend raising your level to at least Gear Level 27+ before fighting them. You can increase your Gear Level by making the following items.

Making the items listed above will raise your total Gear Level to 30, which is the perfect range for surviving the Bandit Armory and slaying Grayson the Armourer. Upon killing Grayson, you will unlock Whetstones and can then craft them back at the Furnace with 12 Stonedust and 1 Copper Ingot.

What are Whetstones used for in V Rising?

For more on V Rising, we recommend checking out both Is V Rising an MMO? and Does V Rising have controller support? here on Pro game Guides!

Where to find Whetstones in V Rising