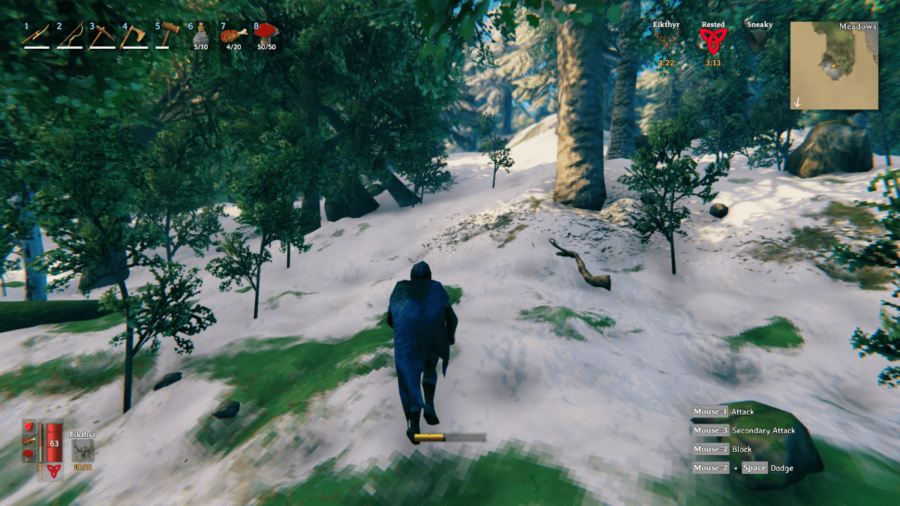 If you are wondering how to get warm clothes, there are two ways; both involve crafting two specific types of armor in Valheim.

How to stay warm in Valheim

To get warm clothes in Valheim, you will need to either craft a lox cape or wolf fur cape; however, crafting both is no simple task. For starters, to craft wolf armor in general, you will need to go into the mountain biome and hunt wolves for wolf pelts and find sliver ore.

This isn't a good idea if you are just starting out in Valheim because the mountain biome has a freezing effect that will kill you fast.

Luckily you can make a pretty useful item called a frost protection mead, which will keep you alive long enough to find and kill enough wolves.

Still, even with the mead crafted, you will need to get the silver ore, and to get it, you will need to summon and defeat the third boss in the game and get a unique item called a wishbone. This item, when used will help you to locate several things, including sliver ore underground.

Related: Where to get Chitin from the Kraken in Valheim

Once you got all of the required materials, you can make a wolf fur cape with the following materials inside a level two forge.

Alternatively, you can also go after loxes in the plains biome to make a lox cape, which will protect you from the cold. However, we don't recommend doing this just yet, because the plains biome is home to countless dangerous creatures, which makes it probably the most dangerous biome in the game so far.

However, if you are up to it, you can make lox armor with the following resources inside a level two workbench.

For more on Valheim, we at PGG got you covered with awesome guides like how to make leather armor and how to make troll hide armor in Valheim.

How to destroy items in Valheim

How to get the Swamp Key in Valheim

How to make a Smelter in Valheim

How to get iron ore in Valheim | Iron ore locations

How to use the fermenter in Valheim