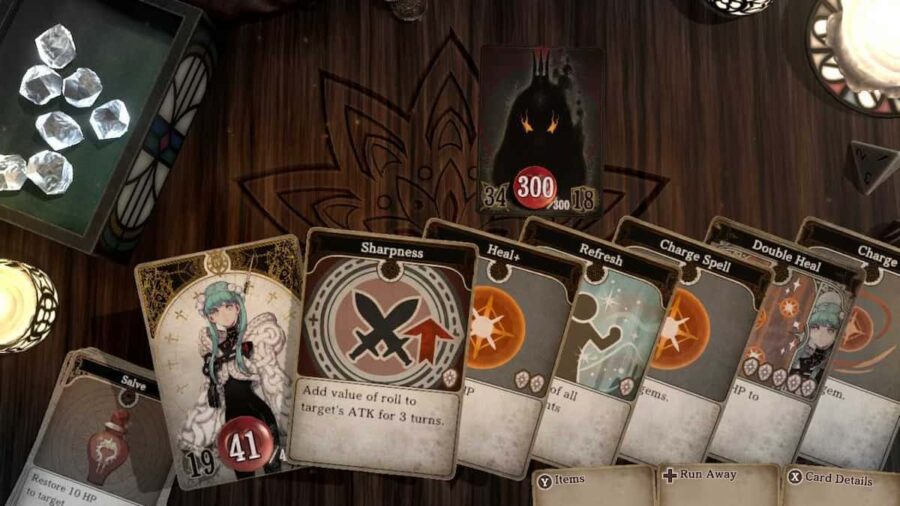 Deep in the Heart’s Domain is the Queen, one who looks like Laty. She will be protected by an aggressive giant shadow called the Supercilious. This behemoth has a worrisome 34 Attack and 300 HP with high Defense. How do you beat it?

First, for all their offensive skills, Blight and Queni don’t actually have high Attack power. This is why you should place all your hopes and trust on the protagonist. Arm him with the best weapon you have. Blight and Queni can attack or charge, depending on the situation, but they shouldn't be your main damage dealers.

Related: What are the right answers to The Queen’s questions in Voice of Cards: The Forsaken Maiden?

Second, if you don’t buff your team, Supercilious will put all of them on critical HP with one hit. This is dangerous since you only have one reliable heal skill (Laty’s Heal+) and it's single target. Double Heal, which targets the entire party, costs too many gems to be used every turn.

Therefore, if you already have access to the team move Starlight Veil, equip it. It needs six crystals but the Defense buff it will give your team is priceless. Laty also learns Guardian at higher levels, which has the same effect without the offensive power and the excessive crystal requirement.

Just stay alive and attack when it looks safe, you should be able to beat it. You can also make the battle run faster by using Blight and Queni’s team skill, which inflicts deadly poison. You can generate enough crystals for it by spamming Laty’s Charge Spell.

How to beat the Giant Shadow in Voice of Cards: The Forsaken Maiden