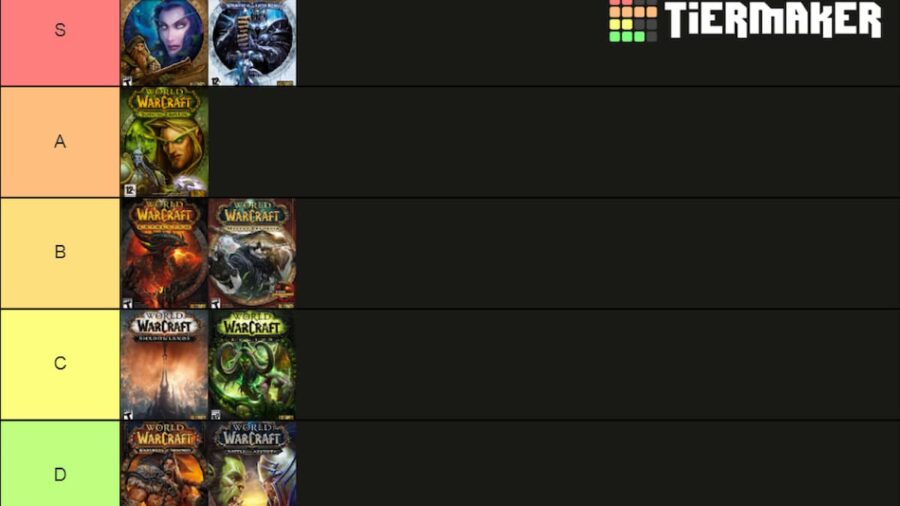 Below we’ve listed the best World of Warcraft expansions, listed from worst to best.

Widely regarded as the expansion closest to killing WoW, Warlords of Draenor started strong but quickly dropped subscriber numbers. Coming after the highly divisive Mists of Pandaria, Draenor’s biggest misstep was the inclusion of Garrisons. In an attempt to add a player housing-like experience, Garrisons killed the open world. It forced players to spend most of their time in the Garrison rather than the new zones or cities.

An expansion that was supposed to be a return to form for the ailing MMO, Battle for Azeroth instead became the best example with the problems rooted in WoW’s design. With players stuck grinding Azerite power for their Heart of Azeroth, the expansion was plagued with systems within systems. Highlights of the expansion include Mechagon and the introduction of Allied Races.

Legion introduced the Demon Hunter class and did a great job of recovering from the disaster of Warlords of Draenor. But the expansion was blighted by over a decade of missteps. The confusing and unorthodox plot and the punishing raids were both a blessing and a curse. Some saw Legion as a return to form, but still, more were pushed away by an increasingly limited amount of class options and changes.

World of Warcraft’s most recent expansions was one of the most highly anticipated ever. It came off the back of Battle for Azeroth, and most players were excited about features such as the Torghast rogue-like experience and Covenants. Unfortunately, mistakes in execution ruined some of the potentially best new additions. The forced grind of Torghast and the locking Covenant abilities are the best examples of this.

One of the most controversial WoW expansions of all time, Mists of Pandaria sent players to the mysterious island of Pandaria. While Pandaren had been a part of Warcraft lore for decades, many players did not welcome their inclusion. The stranding of the Horde and Alliance forces on the island felt not like an exciting new adventure but a distraction from the main plot. As a result, even the fantastic gameplay of the new raids and class changes were overshadowed as many players dismissed the cartoony “Kung-fu Panda” adventures.

Following the hugely successful Wrath of the Lich King, Cataclysm was almost doomed to fail, as it could never live up to the stunning conclusion of its predecessor. Despite numerous well-regarded gameplay features, an expansion of the open world as a whole, and positive changes to raiding and Player versus Player. Despite being nowhere near as bad as other expansions, Cataclysm quickly saw subscriber counts fall during its lifespan.

How do you follow the launch of the most popular MMO ever to exist? The Burning Crusade answered that by delivering more incredible gameplay while bringing in much-needed class balance and simply raising the level cap. It became the go-to formula for MMO expansions from then on. On top of this, the added Arena modes entrenched Player versus Player (PvP) as a central part of World of Warcraft for decades to come.

Related: How to get to Exodar in World of Warcraft Classic Burning Crusade

Wrath of the Lich King

The culmination of the story that began in Warcraft III, Wrath of the Lich King had players play through the final fate of Arthas. Adding Death Knights and their incredible starting location also made it one of the best expansions. Beyond that, the raids were fun and meaningful, the story was top-notch, and it ended with a tragic, bittersweet twist. This was rightfully known as the best World of Warcraft expansion of all time.