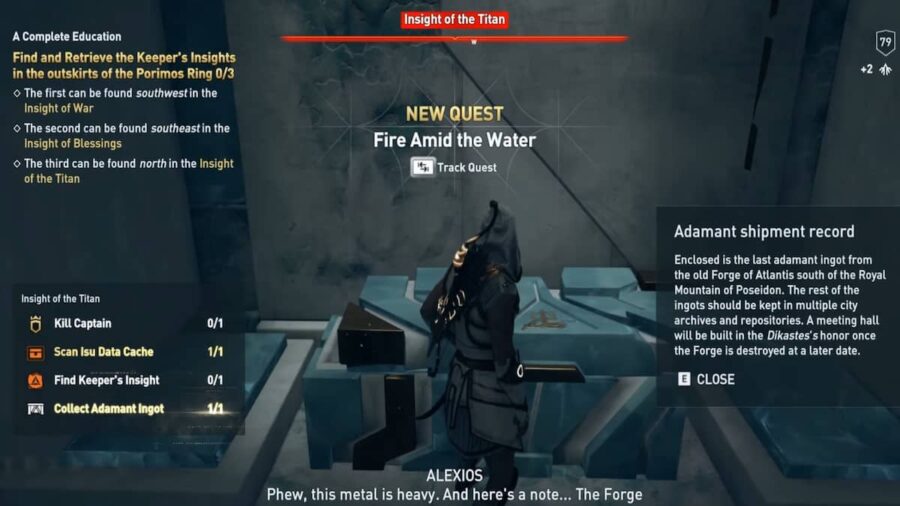 Within Assassin's Creed Odyssey, players can now craft Adamant Weapons in the Fate of Atlantis DLC. Of course, to make Adamant Weapons, players will first need to find both the Forge of Atlantis and the Adamant Ingots to craft with. Luckily, outside of the Insights, these ingots can be found spread all across the inner circle of Atlantis.

Related: Where is the Forge of Atlantis in Assassin’s Creed Odyssey?

The three Keeper's Insight locations each have an Adamant ingot inside. They can be found on the upper floor of the Insights, inside of a chest. These insights are part of the quest, "A Complete Education." This includes the Insight of War, Insight of Blessings, and Insight of the Titan, which all lie on the Porimos Ring. Collecting these three will allow players to craft their first three Adamant weapons.

After entering the Tinia Archive, players should head down the steps off to the left. From here, jump further down and straight ahead. Head into the library off to the left, players can find this chest off to the right.

Enter into the Repository and take the stairs down inside, off to the left. Look and jump off the ledge near the bottom of the first flight of stairs. Turn back around and go through the doors here. The chest will be just inside.

After entering the Consus Archive, players will need to head once more down the stairs to the left again. Jump even further down into the open plaza area here. Past the slightly glowing window, go through the door on the right side to reach this Adamant Ingot.

Enter into the Repository and drop down from the flowering vine into the room below. Turn around and head through the door. The chest containing this ingot should be sitting on a table at the bottom of the stairs.

This Adamant ingot can be found in the center of the lower level. Jump down after entering inside to the slightly lowered part of the floor, then head back through the door here. It'll be in a chest behind some vases and artifacts.

After entering the Archive of Hephaistos, jump down to the area with the captain and turn around. Head through the door here down to a lower room with a fireplace. The chest holding the ingot will be on the floor behind and above the fireplace.

For more Assassin's Creed content, be sure to check out When is Assassin’s Creed The Ezio Collection arriving on the Switch? on Pro Game Guides.