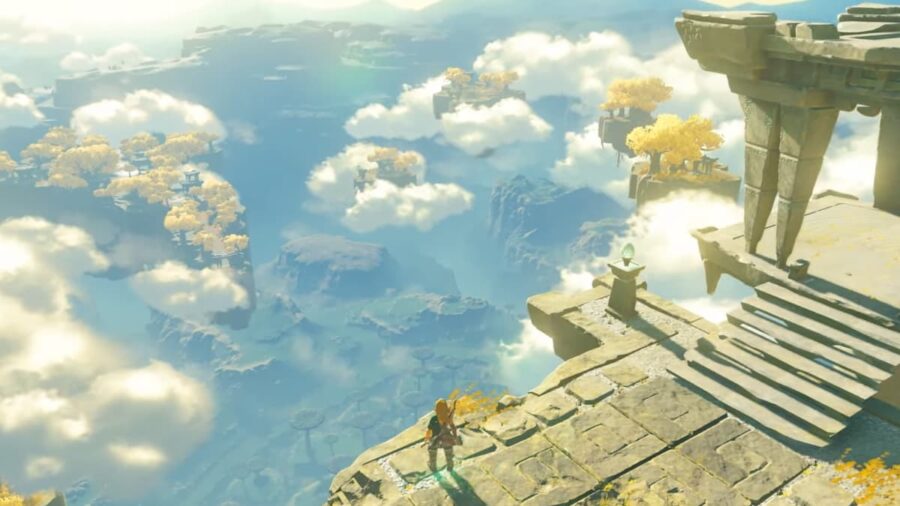 First gameplay footage of the The Legend of Zelda: Breath of the Wild 2 was shown during the Nintendo Direct E3 2021. The sequel to the 2017 Nintendo Switch/Wii U title takes Hyrule to the skies with much of the trailer teasing new, floating locations in the clouds. A release tentpole slated for 2022 was also revealed.

The teaser trailer begins with dangling red and black tentacles and a brief flash of the sinister mummy that was shown in the 2019 first look trailer. This mummy is, presumably, the villain of BotW2, driving more theories that this monster could be an undead version of Calamity Ganon (aka Ganondorf), the main antagonist of BotW and the overall series.

Whether or not these two villains are one in the same is still unknown, but as Ganon's castle rises into the sky, it's clear that he isn't finished wreaking havoc on Hyrule. Not just yet, anyway.

Speaking of the sky, vertical traversal appears to be a main gameplay mechanic in the sequel. With Link first seen freefalling in the clouds, floating geography appears to add a new layer of Hyrule not seen in the original. Everything from the world itself to stone boulder monsters rising from the earth is evident in the teaser.

How this new threat to Hyrule was caused is still unknown, but it could be the doing of Link and Zelda themselves. The 2019 trailer depicted the two heroes exploring underground to discover the new undead threat, a mummy that's been storing energy and growing in power, presumably, throughout the events of BotW. Whatever has been unleashed appears to be the cause of this new catastrophe with Zelda, especially, in danger.

Related: Best Horses in Zelda: Breath of the Wild

The Legend of Zelda: Breath of the Wild 2 is the working title of the sequel to Breath of the Wild, the 2017 action-adventure game that refreshed the core series with a freely open world, voice acting, and non-linear storytelling. This series of games takes place at the end of the Zelda timeline and released to rave reviews, becoming one of the best-selling video games of all time with nearly 24 million copies sold.

As confirmed by the teaser trailer, Breath of the Wild 2 is expected to release in 2022, though this date could always change in the future. For now, we'll have to dissect the breadcrumbs Nintendo placed in the two available videos.

For more on Breath of the Wild 2, be sure to check back with Pro Game Guides.

What is The Legend of Zelda: Breath of the Wild 2 release date?