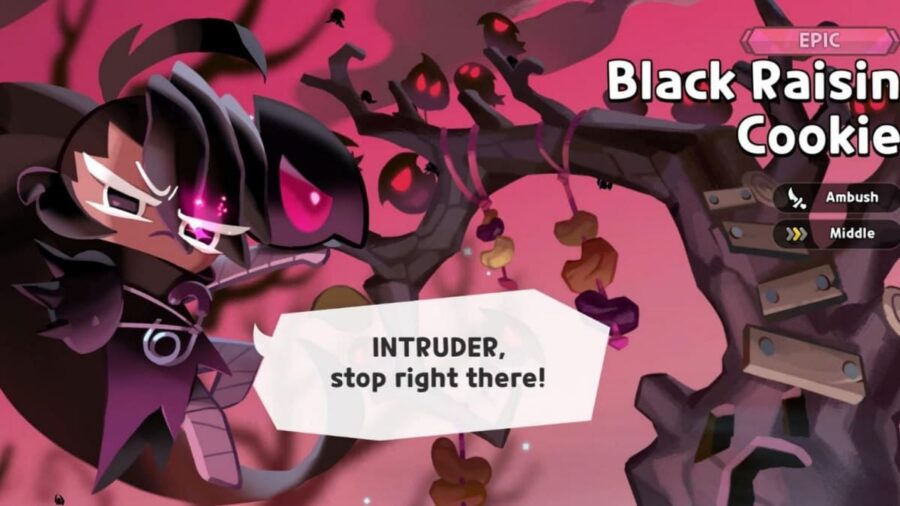 Black Raisin Cookie is an Epic Ambush Cookie whose heart is much bigger than her outwardly aloof personality. While Black Raisin may look intimidating at first, she's a genuinely kind soul who cares about others, evident in her role during the Vanilla Kingdom exploration sequence with GingerBrave's party.

Shadow Watcher: No one can hide from the keen Black Raisin Eye! The Cookie vanishes into the shadows, appears amidst the enemy ranks (targets Cookies first), and strikes several times, dealing substantial area DMG.

Black Raisin Cookie is a full-on DMG dealer who can shell out a decent amount of DPS by dealing a series of assassination-esque slashes with her Skill. While the game is teeming with an array of newer units—especially Legendaries—that play the same role as Black Raisin, she still has a place in the meta with the right build and team composition.

Related: How to get Sea Rarities in Cookie Run: Kingdom

As a DMG dealer, Black Raisin's best build is a full set of Searing Raspberry Toppings. This will maximize her ATK gains and amplify her role in the team. For bonus stats, aim for ATK, Crit percent, and DMG resist—putting the most focus on the latter to help her survive battles against powerful units.

For Treasures, make sure to equip the Squishy Jelly Watch to aid with cooldown reduction, as well as DPS-boosting options like the Grim-Looking Scythe and Old Pilgrim's Scroll.

Check out our guide on the Best Hollyberry Cookie Toppings build in Cookie Run: Kingdom to improve your team's defenses.