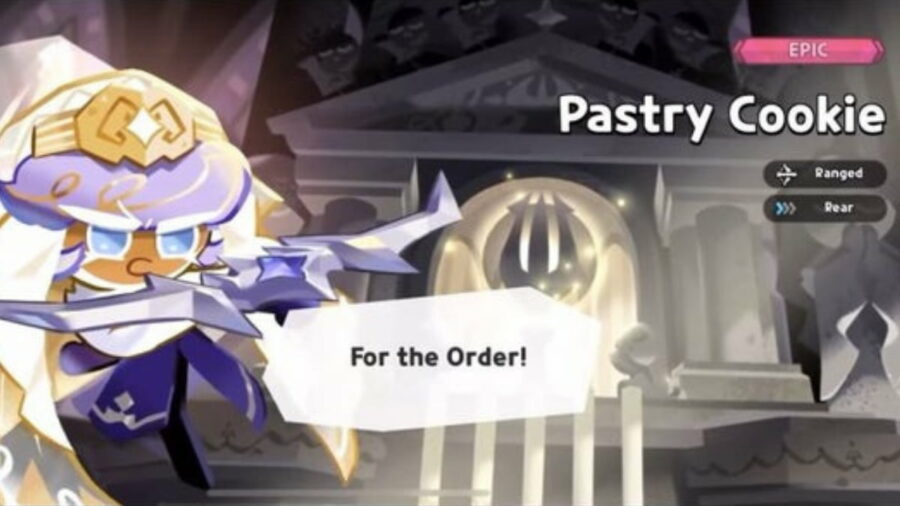 Pastry Cookie is an Epic Ranged Cookie that specializes in defeating large waves of enemies from the backlines. As a member of the St. Pastry Order, she played a huge role in the Tower of Sweet Chaos, where her character was portrayed as the antithesis to Red Velvet Cookie.

Battle Prayer: Injustice shall be purged! After a regular attack, Pastry Cookie fires an arrow of light at the nearest enemy. Under the effect of the Battle Prayer, the Cookie's regular attack DMG and ATK SPD are increased.

Pastry Cookie's gameplay revolves around her regular attack, which bounces around enemies, making it great for clearing large hordes of mobs in World Exploration. Her Skill is a self-serving buff that increases Pastry's regular attack DMG and ATK SPD, amplifying her DMG output. Her buff doesn't benefit the rest of the team, so she's best used as a primary DPS.

As a primary DMG dealer, Pastry Cookie is best equipped with a full set of Searing Raspberries. Opt for ATK SPD and cooldown reduction bonus stats to help further enhance her DMG-dealing capabilities.

For Treasures, opt for pieces that can make Pastry even stronger, such as the Old Pilgrim's Scroll and Grim-Looking Scythe. Additionally, the Squishy Jelly Watch is a must-have for cooldown reduction.