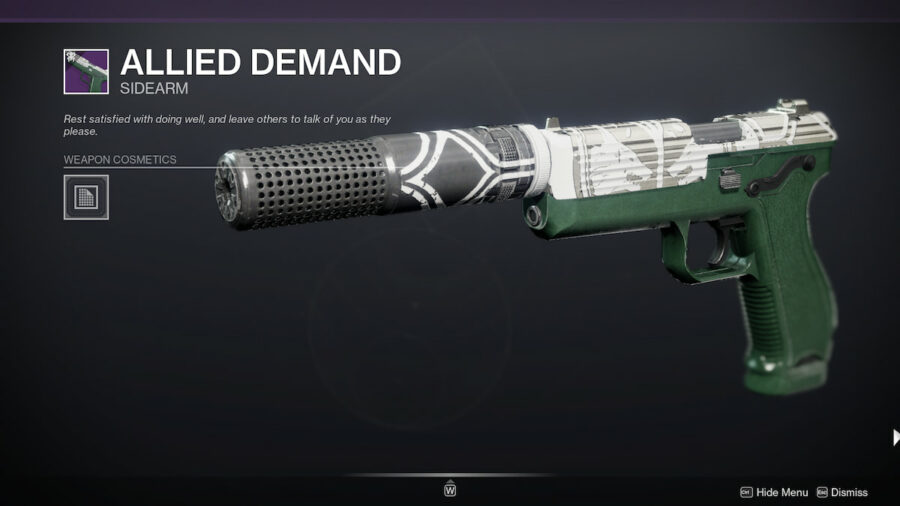 Everyone's favorite Caeser Salad routinely visits the Tower like a warforged version of Santa. In his bag of goodies, there is all manner of dastardly weapons and armor. No matter what your preference is, there's something for everyone. Right now, though, we're looking at the Allied Demand sidearm and its best possible rolls.

How to get Allied Demand in Destiny 2

The Allied Demand sidearm can be acquired from drops during Iron Banner or focused at Valus Forge in the Tower. Note that it is only available during the weeks that Iron Banner is active in Destiny 2.

Allied Demand Best Perks for PvP and PvE in Destiny 2

Is Allied Demand better for PvP or PvE in Destiny 2?

A good sidearm can clean house in either PvE or PvP content. It largely comes down to the roll and the user. That being said, Iron Banner weapons typically do better in PvP as that's the mode they drop from and are more commonly encountered in. Additionally, their Origin Trait, Skulking Wolf, is designed for PvP. While Allied Demand can do well in PvE, there are better options, so it's more of a single-target PvP weapon.