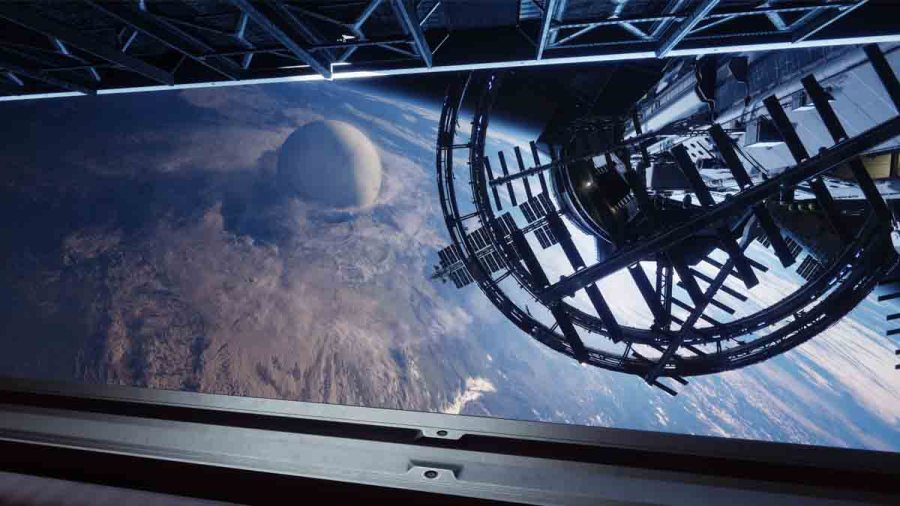 Operation: Seraph's Shield is the Exotic weapon mission released during Season of the Seraph in Destiny 2. Guardians must venture through the orbital station to restore the fragmented AI Warmind, Rasputin. But this isn't your standard mission as it functions like a mini-raid with mechanics very similar to Deep Stone Crypt. Here's how to get through it in one piece.

Scanner Splicers drop Scanner Augments. When equipped (marked by the blinking Scanner buff in the bottom left corner), the Scanner Augment reveals and highlights important objects in a yellow highlight. These are typical control panels that need to be hacked. In other instances, they will reveal the path a Guardian must take to survive a room.

The Operator Augment is dropped from an Eliksni enemy in the same way the Scanner Augment is. It will reveal the active control panel, which must be shot. Once activated, the next control panel will be revealed.

The Suppressor Augment interacts with floating orbs spread around a room. Players will stand under the orbs, do damage to the shielded foe, and proceed to the next orb. Once all three are used, a floating red machine will be exposed. Destroy it to bring down the shield.

Augmentation Terminals are large booths into which Guardians can deposit the three different Augments. Typically these are used to open a door and will always remove the deposited buff.

Related: How to start the new exotic quest in Destiny 2 for Revision Zero

This room will be a Guardian's introduction to the puzzles yet to come. There will be a Scanner Splicer in the room. Eliminate them and grab the buff. Three terminals in the room must be hacked. They will be highlighted in flashing yellow and are very hard to miss.

Deposit the Scanner Augment to open the door to the next section. Take out the mob and grab the Scanner Augment. Hack the terminal on the yellow column. Opposite that column will be a door that requires a security clearance. Jump to the ledge above it and shoot out the grill to access the ventilation shaft. The next room will be a series of three laser grids that alternate between active states. Proceed through them to hack the second terminal at the end of the room.

Before you use the Augmentation Terminal to open the door just to the right of it, note the four panels to the left. One will be flashing yellow. This is the terminal you need to hack into the next room. Once hacked, this will open a new door in the yellow room. Head through there to the vertical room full of turrets. Eliminate the turrets and go through the door at the top.

In the next room will be another Scanner Splicer. With the Scanner Augment, look through the window on the top catwalk. This will tell you the terminals to activate in the room below. You can either try to remember this path or use our handy map above. Walk along the path, and don't try to jump from one space to the other, as this will result in immediate death.

Related: How to get Flash of Inspiration in Destiny 2 Dawning

Once clear of the radiation room, proceed through the door and eliminate the mob inside to gain the Operator Augment. The control panel to shoot will be on the right of the door. Shoot it, head through, and take out that mob. In the ancillary room to the left, four columns will be behind the glass. On the second column from the right will be a control panel to shoot. This will open the door to the next room.

After clearing the mob, head to the back and the right. There will be a ventilation shaft to crawl inside. Go inside, and there will be an opening. Shoot the terminal inside that room's column and head back outside the vent.

Go back to the previous room and look behind the column on the left before the exit. There will be a vent that is now open. Head inside and take out the enemies waiting for you. Through a crack in the window on the far wall will be another terminal to shoot on a column. Head forward, and there will be an open door on the left.

Clear the mob in the room and deposit the Operator Augment in the Augmentation Terminal to open the next room. The next room will be the Guardians' first boss fight. Do what you do best and take them out. From there, to proceed, Guardians will need to be captured.

Retrieve your weapons and break out of your cell. Access the first terminal to your left to give the BrayTech Security Frames access to the ship. Once the Eliksni are dealt with, access the terminal at the end of the hall to proceed. Head outside into space and follow the blinking lights to move from one platform to the next.

Towards the end, there will be an Eliksni with an Operator Augment. Take him out to gain the buff. There will be three terminals to shoot that will extend platforms and allow you to move forward. Once you're done with your space walk, deposit the Augment at the terminal to open the door and head inside.

The first boss will appear once more. Drop him like it's hot. In the next room will be an Operator Augment. Nab it and shoot the terminals on the walls. This will open the doors on either side of the room. Head to the room on the left first, remove the enemies inside, deposit the Operator Augment, and pick up the Scanner Augment. In each room, there will be a terminal to hack. Once hacked, that will open up another room back in the center room.

In the next room, deposit the Scanner Augment and pick up the Operator Augment. On the backside of the room, there will be an Operator Terminal from a hanging column. Shoot it to open the door to the ancillary room. Clear out the enemies, deposit the Operator Augment and grab the Scanner Augment. Hack the terminal in that ancillary room, which activates a teleporter in the U-shaped room.

The teleporter will take players to the Operations Sector. Deposit the Scanner Augment to open the door. Inside will be an immune Servitor and three floating orbs. Kill the Eliksni to grab the Suppressor Augment. Stand under each orb and shoot the Servitor to do some damage. When the Servitor becomes immune again, move to the net orb and repeat the process. Once each orb has been used, a door to a floating red machine will open. Blow up the machine to remove the Servitor's shield and kill it. Deposit the Suppressor Augment and open the next door.

The final boss utilizes Suppressor Augments. There will be three orbs spread throughout the arena. Kill the Eliksni with the Suppressor Augment and claim it. Do your damage from underneath each orb to open the doors to the floating red machines. There will be three in cardinal directions around the room. Destroy them to bring down the boss' shield. After two rounds, you can upload the virus, claim your loot, and tick this mission off your to-do list.