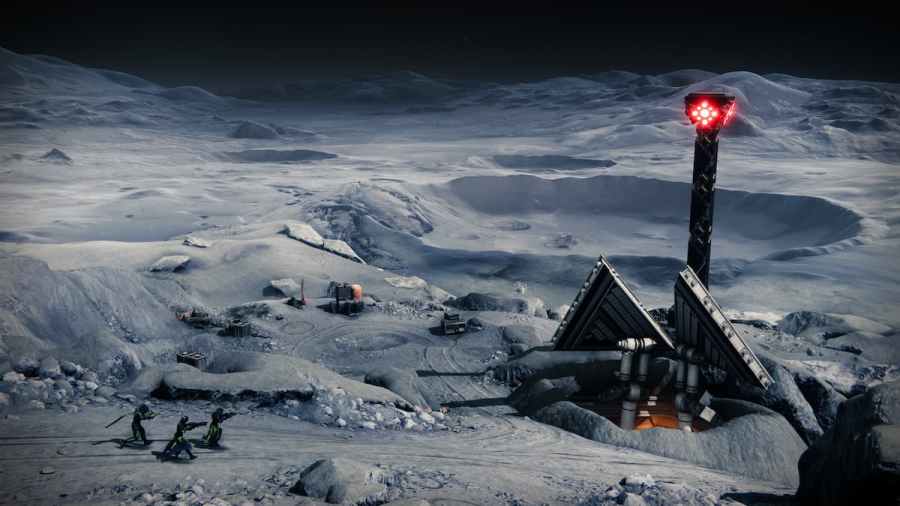 Destiny 2's Season of the Seraph introduces a new three-player activity that requires Guardians to take back Rasputin's Seraph Bunkers from the combined forces of the Hive and Fallen. Over the course of the season, Guardians will travel to different bunkers throughout the system. But, every journey of a thousand miles begins with a single Heist Battleground on the Moon.

Guardians will drop onto the surface of the Moon and immediately be faced with a tandem army of Hive and Fallen. It's a fine line between taking out enemies and staying out of the line of sight of the Seraph Bunker Towers. Should Guardians stay exposed for 15 seconds, they'll literally be deleted from Luna's surface. Staying in cover will have the counter go back up, to a maximum of 15 seconds.

Once a Host is downed, Xivu Arath will summon a Deathtongue Chorister. This thrall with far too much health will move towards the Annihilator Totem. Should he reach it, he'll begin to sing Xivu Arath's warsong. This will prevent Guardians from using any abilities, their super, and will also buff all enemies in the area. As such, it is priority numero uno to drop the Chorister as soon as possible. With the sinister singer and both Cryptoliths destroyed, Ana Bray will gain access to the system and shut down the Seraph Towers, and open up the bunker.

There will be two special Scorn that appear. The first are Disruptors. Should they get too close to Ghost, they'll impair his ability to proceed with the hack. The second Scorn to keep an eye out for are the Scorn Captains. Drop them to speed up Ghost's progress.

Phase three is the final encounter in Battleground: Moon. It is a traditional boss battle against a Scorn sniper. Once the boss reaches half health, they will become immune to damage via a shield that must be destroyed. This is accomplished by killing "Arc-Charged Scorn" spread throughout the map. Once killed, these Scorn will drop an Arc charge which must be deposited at the terminal in the center of the map. Once five have been deposited, the shield will drop, and "Operation: Murder" can resume.

That's all there is to Battleground: Moon. Make sure to nab your goodies from the Seraph Chest in the back of the room. May the Traveler smile on you and grant you all the red borders.

For more Destiny 2 goodies, check out All new weapons in Season 19 of Destiny 2 on Pro Game Guides.

How to complete Heist Battleground: Moon in Destiny 2