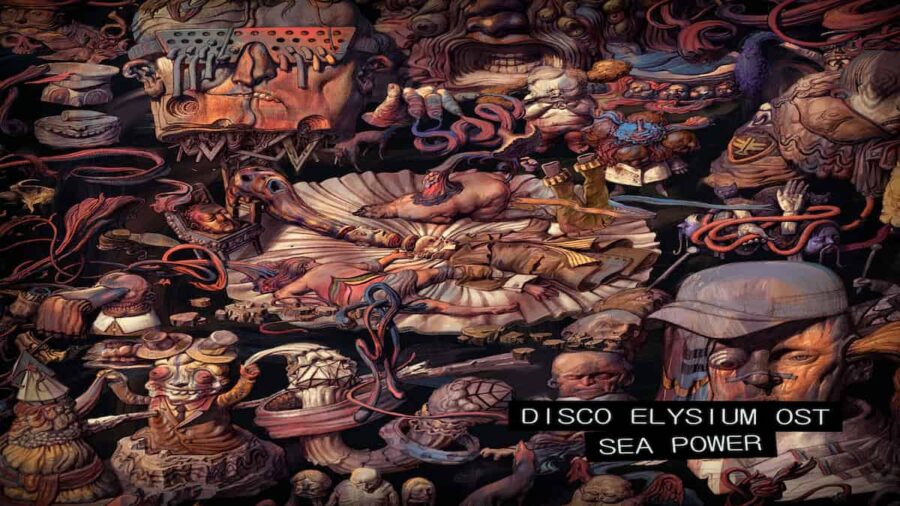 If we had to choose one song to encapsulate Revachol, it would be "Instrument of Surrender." The song plays whenever you step outside into the chilly streets of the city and go on your way to the next objective. The song feels both melancholic and hopeful, as if the town has been battered and bruised but still persists. These horns become entwined with the player's definition of Revachol, as their resounding cry can be heard no matter where the player is.

Despite this inseparability between Revachol and "Instrument of Surrender," the song was not originally created for Disco Elysium. Rather, it was composed for the documentary From Sea to the Land Beyond, a wordless film about the shores of Britain. The song's initial title was "Red Rock Riviera," and it was released in 2013. By some miracle, the song transitions seamlessly to the world of Disco Elysium, defining the acoustic identity of Revachol's streets.

This song sounds like it's telling you to get up and go. It is the driving force of motivation and duty that defines the detectives of Precinct 41. It is the song equivalent of Kim Kitsuragi telling you to get your act together and solve the case. This song, in particular, is given greater significance as the narrative progresses, but even without context, "Precinct 41 Major Crime Unit" gives us a reason to wake up, get up, and get out there.

"Burn, Baby, Burn" sounds like a train of thought taken directly from the protagonist's head. With lyrics like "want to be free, it will last forever" and a leitmotif from the song "The Hanged Man," "Burn, Baby, Burn" evokes a sense of pensive closure. Everything sounds like it's coming full circle. This is one of the only songs from Disco Elysium's soundtrack that has vocals, along with "Smallest Church In Saint-Saëns" and "The Winter."

This song was inspired by the 1976 song "Disco Inferno" by The Trammps, with the shared lyrics "burn, baby, burn" and "disco inferno." Although this classic disco song is upbeat, Disco Elysium's rendition depicts a more somber tone. Where "Disco Inferno" is a fun relationship, "Burn, Baby, Burn" is a nostalgic memory after the breakup.

A title like this creates an impossibly high standard for the absurdity of the song. There's no way a song can earn the title of "totally transcendent" with "ecstatic vibrations" if it isn't a banger. However, with a song that sounds like a skate rink filled with ridiculously cool teens, "Ecstatic Vibrations, Totally Transcendent" is ferociously rad. And we've never used that word before unironically.

"Ecstatic Vibrations, Totally Transcendent" introduces players to the fictional genre "anodic dance music," which heavily resembles the real genre of jungle drum and bass. A few songs that fall under this category are "It's a Jazz Thing" by Roni Size, as well as "Quest" by Andy C. These songs are perfect for those undergoing anodic dance music withdrawals.

This song is so welcoming; it sounds like the sensation of settling down after a long day, sipping some tea, and sinking into the couch. The Whirling-In-Rags plays different versions of its theme depending on the time of day, with a softer piano version playing at 12pm. This song justifies its role as a party hub in Martinaise because who wouldn't come inside after hearing these jams?

This song is one of the only overtly upbeat songs in the Disco Elysium soundtrack, making this tune a one-of-a-kind serotonin generator. We don't understand how the cafeteria manager, Garte, can stay grumpy with this melody on repeat. The feeling of home this song provokes is especially relevant to the gameplay, since it is the place you go home to each night. The Whirling-In-Rags is a comforting hostel cafeteria, and this song perfectly portrays that feeling of settling down.