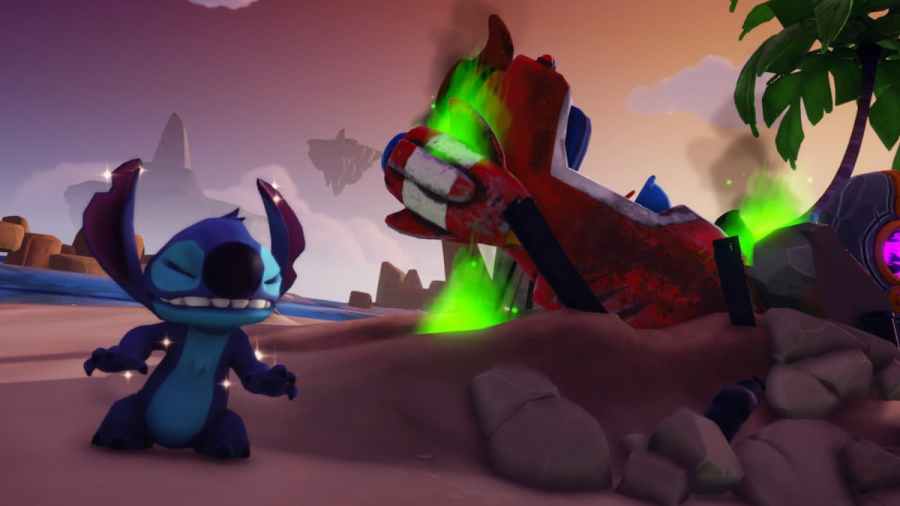 As a nice surprise, Stitch seems to have joined Disney Dreamlight Valley. We say seems because while there is a questline that suggests an alien from outer space has been dropping in and causing mayhem in the Valley, we are currently unable to complete the quest. It makes you wait for "a few days" to continue. We certainly hope Stitch has become one of the rumored Disney characters to officially join the Valley. Here's all the steps we know so far to complete the Mystery of the Stolen Socks in Disney Dreamlight Valley.

To start this quest, find some Soggy Socks on the small island next to the Skull Cave on Dazzle Beach. They have DD stitched on them. Go and show them to Donald, who is convinced aliens, no less, stole them. Normally we wouldn't believe such wild tales, but in this case, you should humor him and go check the crime scene, his house.

You'll find Donald's home a wreck. Help him to clean up the five piles of junk. After cleaning up the fifth pile, you'll find a strange, alien device. Maybe Donald was right after all. Bring the device back to Donald. While you're talking, the device will come in contact with the Soggy Socks. It says it obtained DNA material, and the profile is 33% complete.

Donald will then suggest that you wait a few days. He's seen some lights appear randomly in the sky every so often, and he thinks that is your next clue.

Related: Where to get Onyx in Disney Dreamlight Valley

Five days after completing the prior quest, you should be able to find an orange Chewed-Up Sock nearby the original location of Merlin's house in the Peaceful Meadow. If you pick it up, you'll see there is a G sewn into it. Take it to Goofy.

Goofy has been missing all of his left socks. And he's starting to believe Donald, who has apparently been ranting and raving about aliens all week while you were waiting. Go to Goofy's house and search for clues. You'll see five more piles of junk on the floor. Clear them away to find a tuft of Blue Fur. Take the Blue Fur back to Donald. You'll put the fur in the 'alien doohickey' to hear that the DNA match is 66% complete. Donald will then tell you he'll keep his eyes open for more clues, suggesting you'll need to wait another length of time before continuing.

How to complete Built to Destroy! in Disney Dreamlight Valley

After waiting another five days, you should be able to find a Knitted Orange Sock somewhere in the Forest of Valor. We found ours nearby the Pillar of Courage. Pick it up and you'll be prompted to talk to either Kristoff, Mickey, or Merlin. Go directly to Merlin to save yourself some time. He thinks you might be able to find a clue in his library. Clean up the five junk piles again to find a Mysterious Claw. Take this back to Donald.

The Strange Device is acting, well, strange now. It says the homing beacon is ready. Go place it on the small island nearby the Skull Cave on Dazzle Beach using your Furniture Menu. The elusive little, blue alien will make his grand entrance. Talk to Donald, who is worried that Stitch will keep causing mayhem now that his spaceship is grounded. You'll now be able to place Stitch's home in the Valley. After you've placed it, use the Scrooge McDuck's construction sign and pay 10,000 coins to get the little observatory built and let Stitch know. Stitch will give you more socks that he stole as a reward, and your quest will be complete.

How to get Stitch in Disney Dreamlight Valley