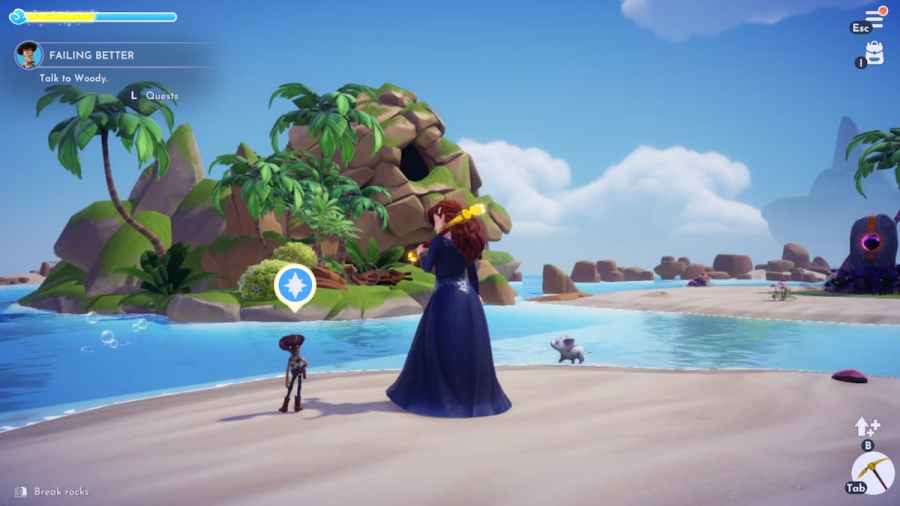 There are no other requirements to unlock this quest other than inviting Woody back to your Village after completing the Realm Quests for the Toy Story Realm. Start by talking to Woody, who is afraid he needs to patch things up between himself and other members of the Village. First go to find Remy, who will tell you all about Woody's failed attempts at cooking. You'll need to open the inventory and try to eat the two failed dishes Remy gives you: Gooey Paste and Salted Garlic Cheesecake (eww.) Talk to Remy again to confirm that Woody needs some help.

Speak to Woody. He'll give you the recipes for the meals he was trying to prepare, Vegetarian Pizza and Cheesecake. To make them both, you'll need two pieces of cheese, which you can only purchase from Remy's Pantry. You'll also need two wheat, one sugar cane, one piece of any fruit, a tomato, two pieces of any other vegetables, and two pieces of coal ore. Cook up the two meals, then bring them to Remy, who forgives Woody's less-than-stellar cooking.

Related: How to make Fish Risotto in Disney Dreamlight Valley

Next follow Woody to Dazzle Beach, nearby the Skull Cave. He'll tell you all about his adventures trying to wrangle up Cod with a lasso for Goofy. Help Woody by fishing up three fresh Cod. You'll need to catch these fresh, no using stored fish. We had the most luck fishing in white spots in the Glade of Trust. Then gather three pieces of wheat (these can be from storage) and turn them into Woody.

He's a bit small to carry them himself, so take the ingredients to Goofy, then meet Woody in front of his Carousel. It's a bit worse for wear and needs some attention. Clean up the seven junk piles inside to reveal a memory of Woody with his friends on the beach, then speak to Woody to complete the quest.