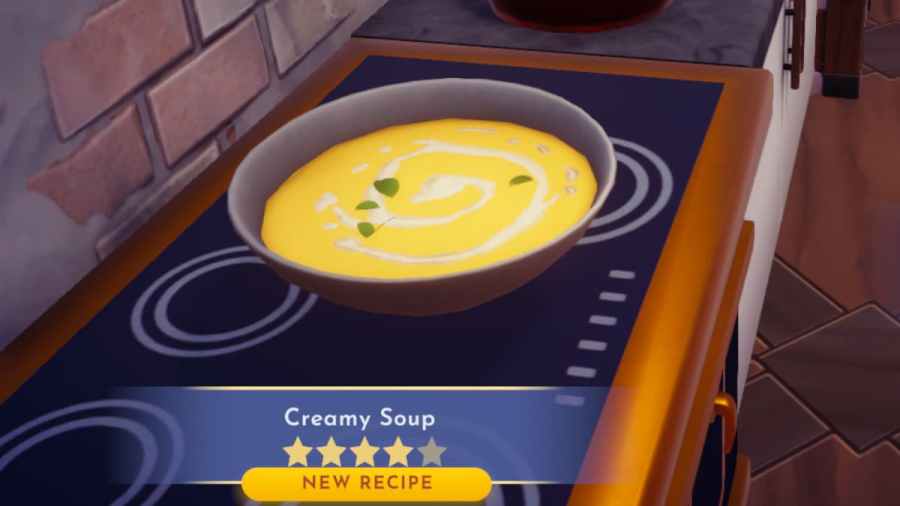 Disney Dreamlight Valley can occasionally be a bit vague with its recipe names. Creamy Soup, a four-ingredient recipe, doesn't give you a lot to go on to guess its ingredients other than its yellow color. We've got you covered if you need some help figuring out what four items you'll need to make this dish.

Related: How to make Gazpacho in Disney Dreamlight Valley

How to cook Creamy Soup in Disney Dreamlight Valley

You can use any spice to make Cream Soup in Disney Dreamlight Valley, such as Milk, Potato, and Any Vegetable. You can easily forage for Spices around any Biome. They typically look like waist-tall green plants, such as Oregano found in The Plaza Biome. If you hang out with a Disney friend who boosts foraging, you'll have a chance at extra items each time you collect a spice.

Milk is purchased from Chez Remy. You'll need to have invited Remy back to your village and followed Remy's questline to open the restaurant. Once you have, Milk is purchasable from Remy's Pantry for 230 star coins a piece.

Potato is an ingredient accessed later in the game after unlocking the Forgotten Lands Biome for 15,000 Dreamlight. You can occasionally buy it from Goofy's Stall there, but his stock rotates daily and may not always be available. However, you should always be able to purchase Potato Seeds. You'll need to upgrade Goofy's Stall in the Forgotten Lands at least once to be able to purchase them for 55 star coins a piece. Don't forget to plant them in the Forgotten Lands Biome to speed up their crop growth time. You should also hang out with a Disney friend who boosts gardening while you harvest for a chance at more potatoes each time you harvest.

Any Vegetable could be a Carrot, Bell Pepper, or even another Potato. These are typically grown from seed rather than foraged. If you've followed WALL-E's quest line and unlocked his garden, it should provide you with more than a few vegetables each day.

How to make Creamy Soup in Disney Dreamlight Valley