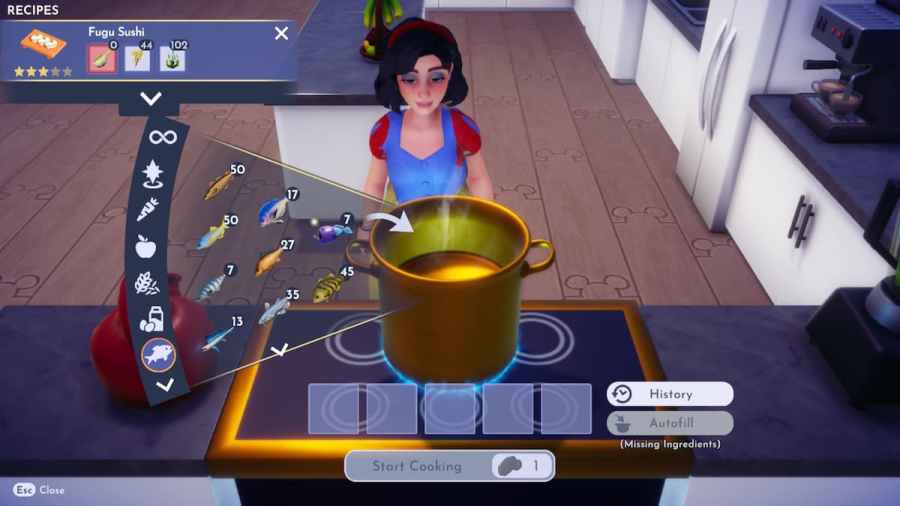 There are a wide variety of Sushi and Maki dishes for you to make in Disney Dreamlight Valley. While they should all follow a specific pattern, some of these recipes break from the norm. Fugu Sushi is one of those dishes. If you looked at the ingredients used, you'd be right to assume that it should be called Fugu Maki, instead. Either way, here is how to make Fugu Sushi.

To make Fugu Sushi, a three-star recipe, you'll need to combine the following ingredients at any cooking station: one Fugu, one Rice, and one Seaweed. Remember, you'll need to use one piece of Coal Ore to light the fire.

Fugus are some of the rarest fishes in the game. They can only be caught during a thunderstorm on Dazzle Beach. Also, they can only be fished from golden, bubbling fishing spots, which spawn less frequently than any other fishing spot. It's not uncommon to hear players getting frustrated when they fished through an entire storm on Dazzle Beach and didn't catch one. Try not to get discouraged if you can't catch one on your first attempt. You can not change the weather in Disney Dreamlight Valley, so your best (and only) option is to wait for the next storm.

Related: How to make a Seafood Appetizer in Dreamlight Valley

Rice is grown via gardening. Rice seeds can be purchased from Goofy's Stall in the Glade of Trust Biome. They cost 35 star coins a piece. You can plant them anywhere in the Valley, but planting them in the Glade of Trust will reduce your crop growth time by 10%. No matter where you plant them, you should always harvest plants while hanging out with a Disney friend who boosts gardening. This gives you a chance to collect extra ingredients with each plant you pick.

Seaweed is easily fished from almost any Biome. Fish in any body of water that doesn't have fishing bubbles. Within one or tow attempts, you should hook a piece of Seaweed. Red Algae, though it looks similar to Seaweed, cannot be used for cooking.

How to make Fugu Sushi in Dreamlight Valley