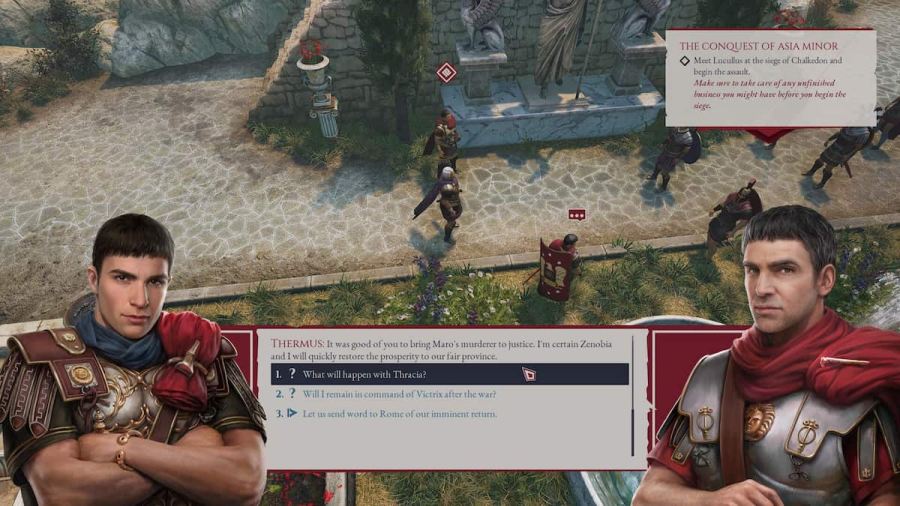 Expeditions: Rome challenges players to choose who will rule the Temple of Apollon, but the choice doesn't make much difference. Players are given the option of siding with Theophilus or Zenobia and whether to execute or imprison one or the other after hearing what both sides have to say.

If you side with either one, it doesn't matter what you do to the other because they disappear from the game, regardless. As for who to pick, players get their troops, regardless. Zenobia is preferable since she will marry Thermus after his release.

The people may be a little restless at first because they chose Theophilus, but if Zenobia is chosen as ruler, it ends up in Rome's favor. The wedding that comes should stabilize the region. In any case, by the time players hear about this, they're leaving the campaign area, so it doesn't matter.

Related: Should I give Archelaus back to Mithridates in Expeditions: Rome?

In any case, choosing Theophilus will only result in his removal by Thermus. Theophilus killed the last governor and sided with Rome, so his character couldn't let go of that part of his story.

Even though the player never sees the results, it is mentioned to them after the battle of Chalkedon.

Should I side with Theophilus or Zenobia in Expeditions: Rome?