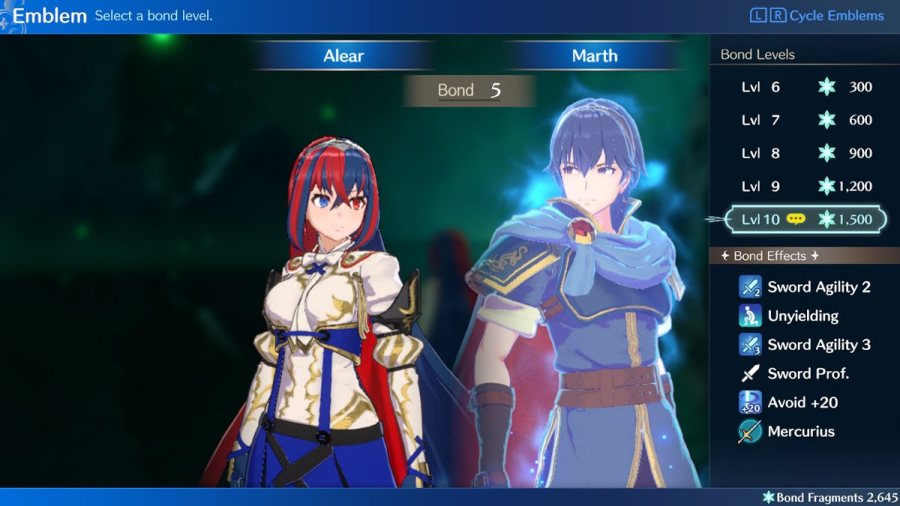 Despite the game's efforts to suggest that each ring "belongs" to a certain character, the Emblems of Fire Emblem Engage can go on anyone the player decides. It's a lot smarter to mix in match Emblems because, while some characters benefit from the rings themselves, others may simply want to inherit a couple skills from them.

Which Emblems are best for each Fire Emblem Engage Unit?

This depends on what the player wants to do with Alear in Fire Emblem Engage. If they want to keep him or her in the Divine Dragon class, it's best to leave Marth with them. Alear can stack a ton of Sword Avoid with Marth attached, making them tough to hit.

Since he is a prepromote, it's probably best to leave Vander without an Emblem Ring. If players want to use him long-term, they should probably give him Sigurd for the mobility.

Clanne definitely benefits the most from Celica's ring. At the very least, Clanne wants to inherit Magic +3 to increase his damage output.

Framme spends a lot of time behind the army setting up Chain Guards and healing units. This actually makes her a good candidate for the Byleth ring since she will be in a position to use Dance of the Goddess often.

Alfred, as a mounted unit, appreciates Sigurd's mobility and Lance Power. That being said, players might also want to consider giving him Lyn for Speed +3, since he is usually just slow enough to get doubled by common enemies.

The best emblem for Etie would likely be Roy. This gives her a couple things: a Strength boost to hit kill thresholds, an up-close weapon in Lancereaver, and an AOE attack that can chip down multiple enemies.

Since hit rates can be a little unreliable in Fire Emblem Engage, it's a good idea to give Boucheron Lucina. He can inherit her Dexterity skills and use a powerful All For One if he has units around him. On top of that, Noble Rapier gives him weapon advantage against other Axe Fighters.

The game gives Celine a ring for Celica, which is certainly a great way to go for the rest of the game. However, players might also want to consider giving her Micaiah since she will give powerful healing with her high Magic stat.

Chloe can be one of the terrifying units in the game with the right amount of Strength. To achieve this, other than being lucky with level-ups, players can pair her with Roy for Strength +5. Giving Blazing Lion to a flying unit is also easy to wreak havoc.

Due to his high Defense, Louis is a great Enemy Phase unit and, therefore, a great candidate for the Ike ring. Louis can sit in range of several enemies, take chip damage and fire off a huge Great Aether.

Jean probably shouldn't be seeing too much combat. That means he wants Micaiah's ring to help healing or Byleth's ring so he can be a secondary Dancer.

Despite starting off with Micaiah, it's a good idea to give Yunaka Marth. This gives her increased Avoid. It can be hilarious to put Yunaka on Thicket tile and watch enemies hit her with a 3% hit rate. Doing this also helps her get more Crit through her personal skill.

The only way to really make Anna work is to give her as much Strength as humanly possible (her natural Strength growth is 15%). To achieve this, players would probably have to give her Roy's ring from Strength +5 and reclass her into a Wyvern.

Alcryst is a perfect match for Lyn's Ring. He already wants to stay behind the army due to his Personal Skill, so letting him fire off Astra Storm from far away makes sense.

Celica's ring works well on Citrenne for players who don't want it on Celine. Citrenne has a higher Magic growth rate then Celine, so she benefits more from Magic +3, and she hits harder with Warp Ragnarok.

Lapiz can struggle to reach kill thresholds, making her want Roy's ring more than anything else. Lancereaver also helps her by giving her an advantage over Lance units which might threaten to KO her.

Especially if Diamant is promoted to the Successor class, Diamant works excellently with Eirika and Ephraim's ring. Diamant can combine the healing from the Sol skill with Solar Brace to give him continuous health regeneration.

Like Alfred, Amber wants the Sigurd ring. This offers mobility, the Canter skill, and Lance Power, which can help Amber hit harder.

Jade is an even better candidate for the Ike ring than Louis. This is because she benefits from Ike's Axe Power skills as well as Great Aether.

Ivy can have lots of utility with the Byleth ring on her. If some units get stuck in a hard place on a given map, Ivy can fly over to give a Dance of the Goddess, allowing them to move again.

It's fairly natural to give Kagetsu the Marth ring, which would add more avoidance to this already speedy Swordmaster. Another option could be Roy for Lancereaver, which would give Kagetsu better matchups on the battlefield.

The one ring that Zelkov really wants is Marth's. Honestly, every Thief in the game wants Marth's ring to let them stack, avoid and become close to untouchable for enemies.

Fogado is a fast unit but struggles to hit hard against some enemies. The best way to fix that is to give him Roy from Strength +5, or to give him Lucina for powerful All For One's with the Noble Rapier.

For a High Priest, Pandero has a very impressive Magic stat. While giving him Micaiah's ring may be tempting to make him a better healer, Pandreo might be better with Celica's ring, as he can fire off powerful Warp Ragnaroks.

Bunet is similar to Jade and Louis in terms of stats. This makes him the third candidate for Ike's ring. What's nice about Bunet is that he already comes on a horse, so he can reach highly populated areas quickly and clear them out with Great Aether.

Timerra comes as one of few Lance-locked units in the game. This makes her a great user of Leif's ring, since she can use different weapon types. Master Lance also gives Timerra a brave weapon she can use to wipe out enemies.

Related: All Classes in Fire Emblem Engage – Base and Advanced

Making Panette a strong unit often comes down to fixing her lackluster Speed stat. The quickest way to do that is to give her Lyn for Speed +3. Due to her raw power, Panette can also fire off a very strong Astra Storm with Lyn.

As a Wolf Knight who can kill quite easily, Merrin definitely appreciates Canter from Sigurd. If players want to save Sigurd for another unit, they can also get Canter through Skill Inheritence and use Roy or Leif on Merrin.

Due to her high mobility, Hortensia can actually use Corrin's ring quite well. The ability to reach areas quickly and apply Dragon Veins is underrated in Fire Emblem Engage. She can also fly across the water that's created through Dragon Fang.

Since Seadall doesn't want to see much combat, giving him Micaiah's ring is a great idea. It will allow him to heal and dance, although he won't get much damage out of the Shine spell that Micaiah grants.

Although she doesn't have the bulk of Jade or Louis, Rosado is another unit who benefits from partnering up with Ike. The nice thing about Great Aether is that is raises defense while it is charging, so Rosado won't seem as frail when she lines up this powerful attack.

Goldmary can put Lucina's ring to good use. She can hit most enemies hard, except for Armored foes, which means she appreciates Noble Rapier. All For One can also reward her for good positioning with a strong attack.

As a Mage, Lindon easily wants Celica's ring. At the very least, it's worth it to inherit the Magic +3 skill for Lindon to increases damage output.

Saphir can work well with Ike's ring for a powerful Great Aether. The other option for Saphir would be Lyn's ring for Speed +3, especially is Saphir is reclassed to a Wyvern.

Best Emblems for each Character in Fire Emblem Engage