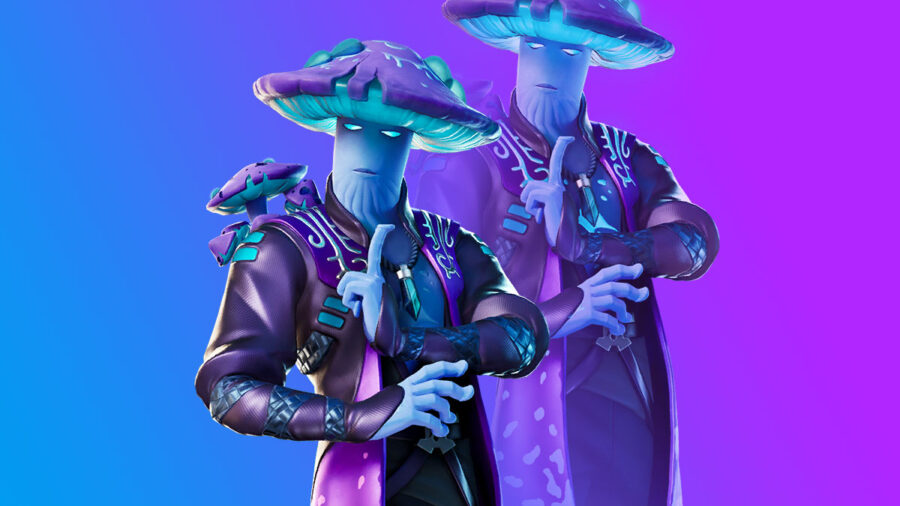 Things are getting quite a bit spookier in Fortnite right now. We just had the release of Fortnitemares, which turns eliminated players into Shadows, and has cranked up the fog machine to 11. As you wade your way through this lingering haze, you might have encountered a creepy looking Mushroom like figure standing in the mists. What exactly is going on with this? Well, there's been some clues in the files found that might point to what to expect from this possible new addition to the game.

To clear one thing up, this model that has been showing up is based off of the long-time leaked skin called Madcap. This item has been in the files for a while now, but was never released into the shop.

It's a pretty interesting looking skin, so it's been a surprise that it hasn't been released yet. However, it's now in-question that this outfit will ever see the light of day. Mobile players have been sometimes seeing the outline for the skin in-game. It's just standing there and it's all black. It doesn't move or make any noise, and appears to be a bug of some kind. You can check out how it looks in the video below.

While that has been going on for a little while, some additional information has leaked recently that the model will be making some sounds when it is found:

We will be getting a quest/challenge that uses the Madcap model and it will use these sounds, i have no other infos but i'll try to find some. pic.twitter.com/JvW82aoFVh

These sounds are pretty creepy, so they likely have something to do with the current Fortnitemares event going on. Another NPC like this has leaked as well, this is a Snowman NPC that will apparently be in the game to give you quests of some sort. This could be a new mechanic that Epic has cooked up. Based on some of the text strings of the Snowman, it seems like you will be able to interact with them in-game and get some kind of quest/challenge that you can complete during that game. This certainly would be a pretty interesting new addition that could change up how the game is played. While you are dodging other players, you might find yourself looking to complete one of these quests for the possibility of loot or even XP!

Unfortunately, nothing official is known at the moment, and these could easily just be something Epic was working on in the past. Not everything that is leaked or in the files makes it into the game, so we'll just have to wait and see how things go with these NPCs!