Our Fortnite Season 10 Secret & Hidden Battle Stars Locations Guide features an up-to-date list of every week available to find those hidden stars! We will be featuring all of the loading screens ahead of the release, so you'll know exactly where to go when you finish up your challenges for the week. You'll want to bookmark this page so you know exactly where each star is located.

This Season marks a different style of challenge going on and they are called Missions. These are weekly missions you'll need to complete within a limited amount of time or they will disappear! If you complete three of the challenges in this limited time mission, then you'll get a loading screen that should have a hint to a location where you can collect a hidden star.

You'll need to complete three challenges in the B.R.U.T.E. Squad Urgent Mission. You have a limited time to complete these, so make sure to do so once the challenges release throughout the week. Here's the loading screen you will receive: 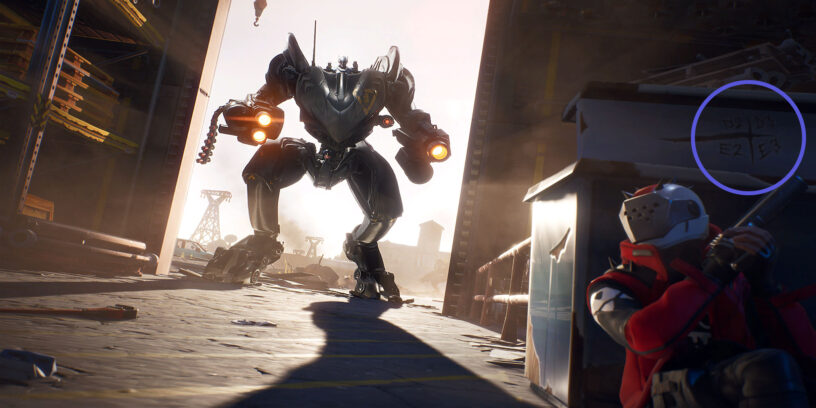 You can see the coordinates right above the X-Lord skin to the right. They read D2, D3, E2, and E3, these correspond to a specific place on the map.

This is south of The Block and just west of the umbrella mining area.

Complete three of the Shootout at Sundown challenges and you'll received the following loading screen. 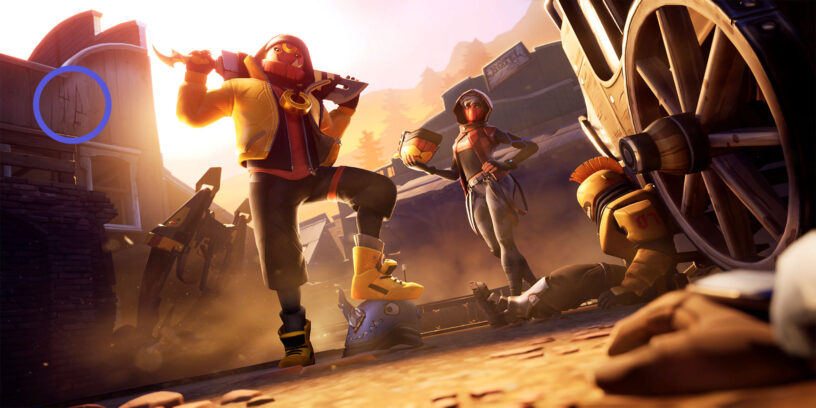 This loading screen shows off two skins, Bone Wasp and Facet. There's a fork and knife etched into the walls on the top left side of the image. You can find the star right in-between these near Fatal Fields.

It's pretty hard to see, but if you look very closely at the battle bus you will see the logo for the SoFDeez Ice Cream Parlor. This is where you will find the battle star! 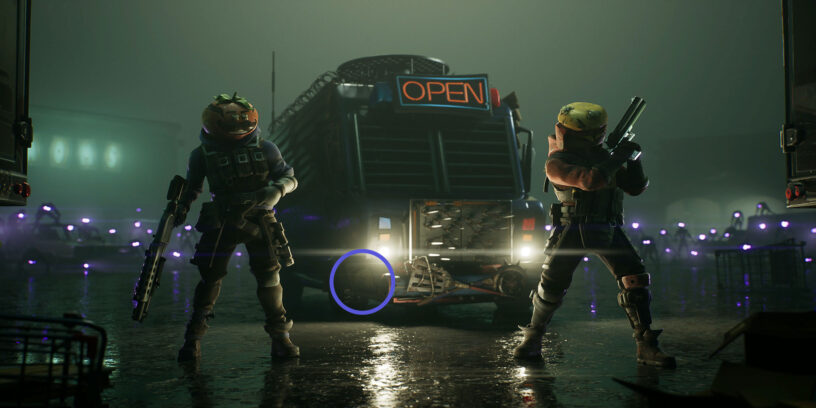 The location is west of the big race track and north of Paradise Palms.

It's inside the shop, right next to the soda fountain machine. 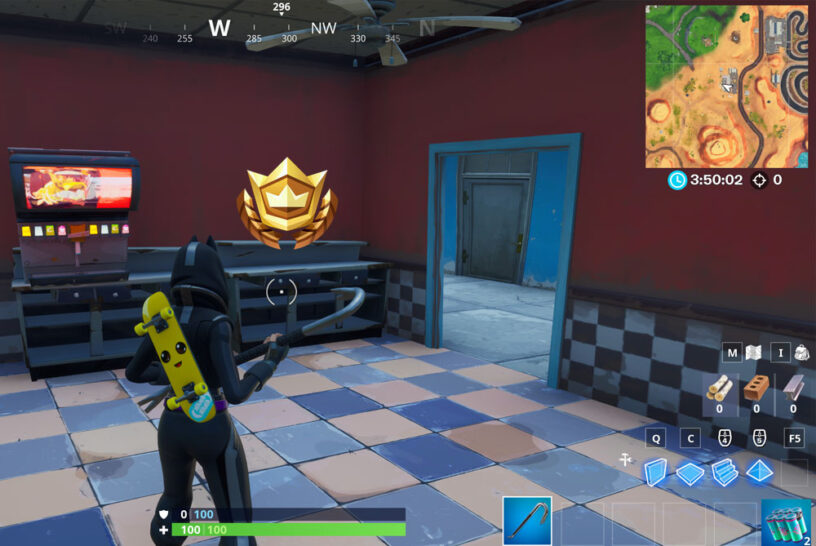 It looks like Week 4 has a star to collect, you can find the coordinates on the loading screen on the bottom right. 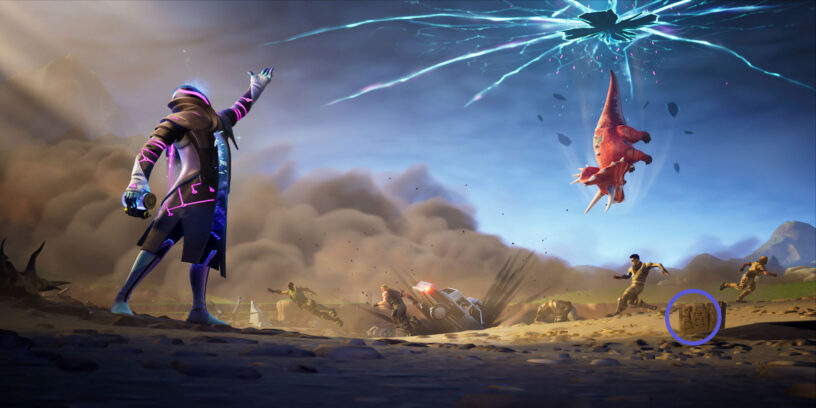 The Infinity skin is shown in this loading screen, and the exact location of the star can be found east of Sunny Steps at the I2, I3, J2, J3 coordinates on the map.

Once you've completed three challenges in the week, you'll receive the new loading screen. The name that was leaked for the loading screen might be incorrect, but we'll update this with that information once it is released. You'll find the coordinates for the location of the battle star in the biohazardous slime in the image. 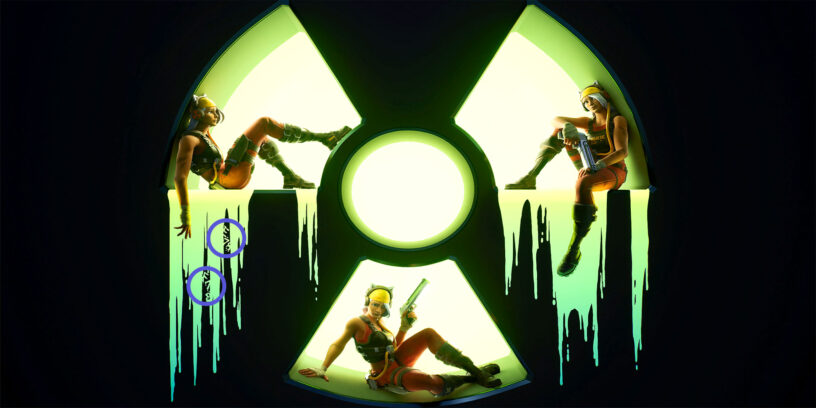 It reads E 7/8 and F 7/8 which can be found on the north western mountain of Fatal Fields.

You'll find the star on a little dirt patch at the northern portion of the map. 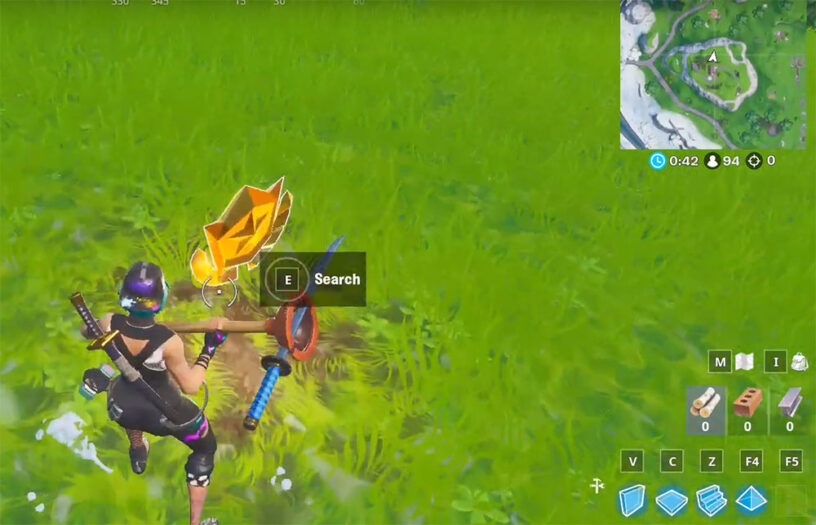 Once you've completed three challenges in the week, you'll receive The Return loading screen. This is depicting likely the return of Kevin the Cube and the floating islands that accompanied that season of the battle pass. 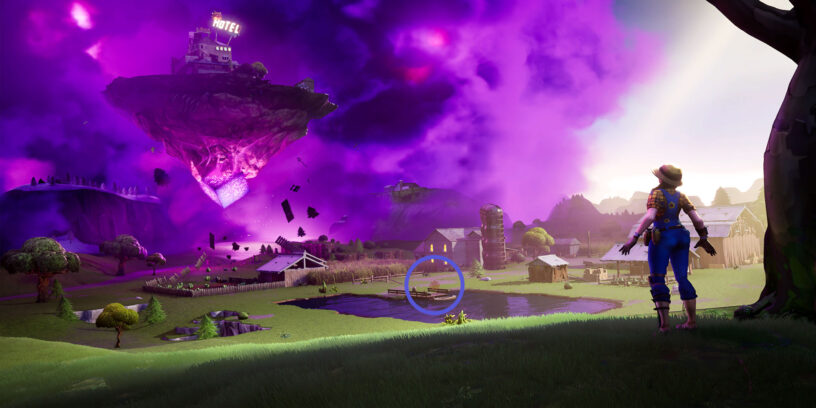 This location is in Fatal Fields, which is apparently going to get torn up by a floating island and Kevin the Cube!

This is right on the dock in the lake at Fatal Fields! 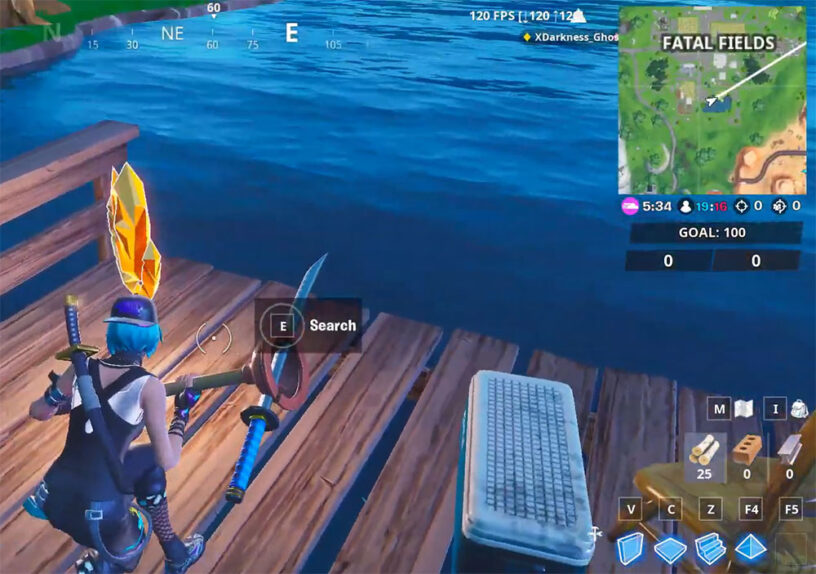 Once you've completed three challenges in the week, you'll receive Summer Slurp loading screen. This screen is showing off some of the new styles of the Moisty Merman skin, and gives a look at the leaked Swamp Stalker skin. The clue in it is a bit weird, because it's not an actual star, it's just the new taco logo! This is signifying that you'll need to head on over to the recently unearthed Greasy Grove! 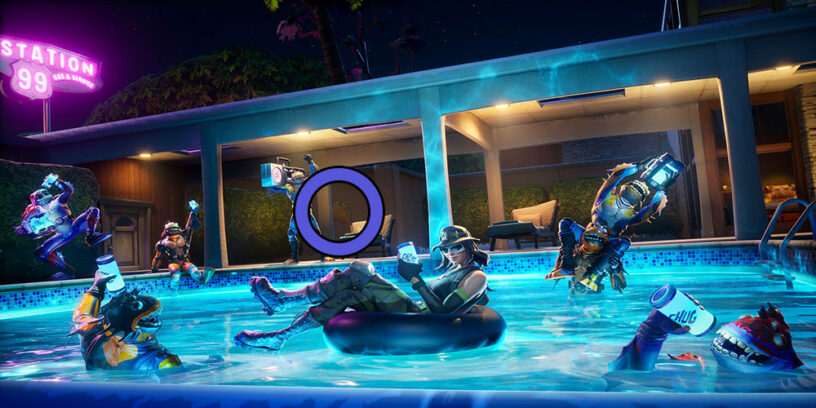 The exact location can be found south east of the viking village in the snow biome! The big tacos restaurant is where you want to go.

The star is located on the very east side of the restaurant between some booths if you face north. 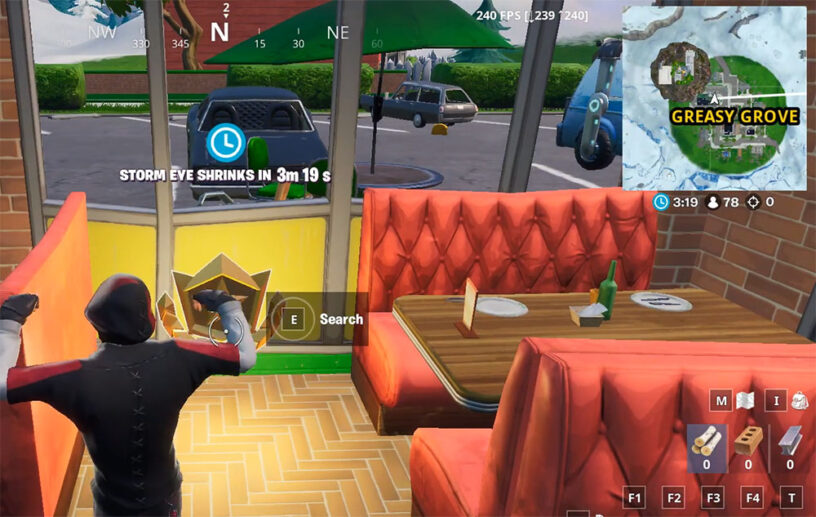 Once you've completed three challenges in the week, you'll receive the Gotham City loading screen. This screen is showing off the new Gotham City area that's going to apparently replacing Tilted Town once the challenges go live. You can see the coordinates to the battle star etched in the side of one of the gargoyles. 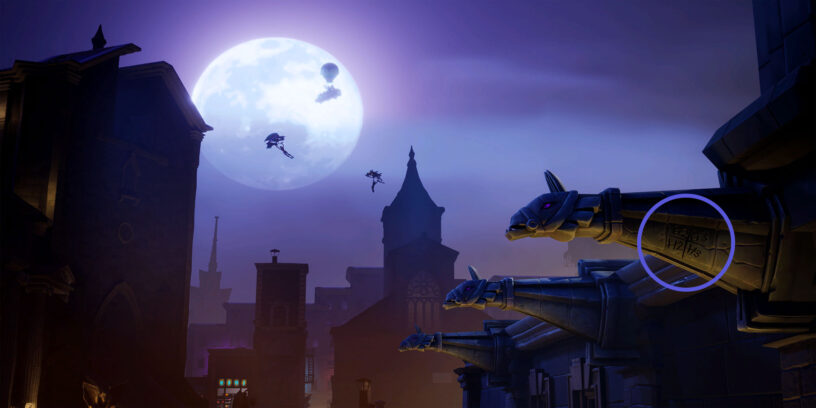 The coordinates are G2, G3, H2, H3 and the exact location can be found at the thermal pools which are east of Lazy Lagoon.

The star is located in the little crater that can be found in this area. 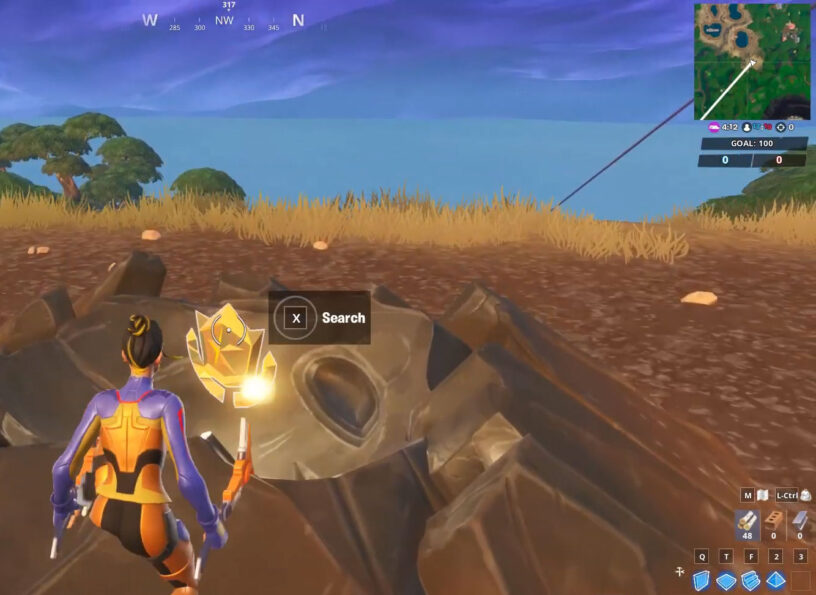 Week 9: Ready or Not

Once you've completed three challenges in the week, you'll receive the Ready or Not loading screen. This screen is showing off the new Combine LTM that people are enjoying showing off in currently. This also displays a couple of leaked skins! The cuddle bear is known as Ragsy, and the llama is known as Bash! They are both part of The Leftovers cosmetic set.

It appears that this will be the last battle star! The season is slightly abbreviated, and the Overtime Challenges will be the "week 10" challenges instead. 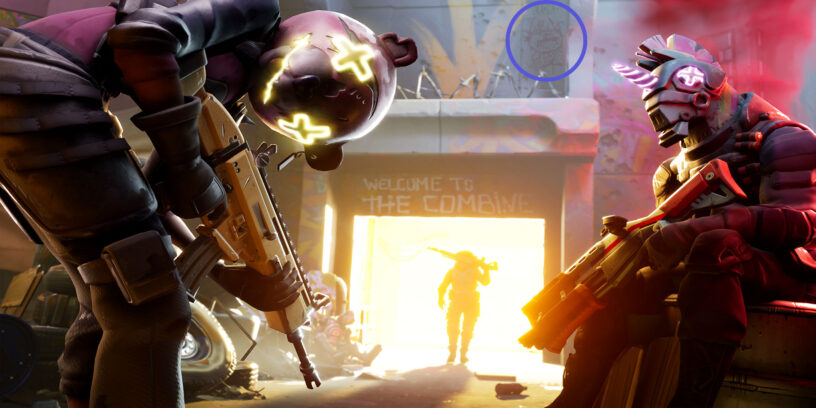 You can see the Tomatohead on the wall there with the battle star over its head. That means you'll be heading to the temple of the tomato!

It is right above the big tomato head that can be found on the temple there! 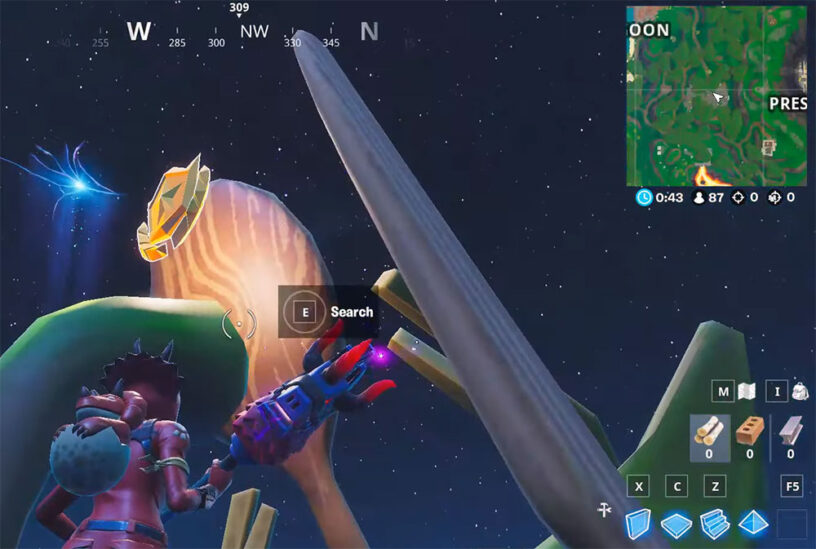 While you can still earn the following Last Stop loading screen, there's no battle star to be found from it.