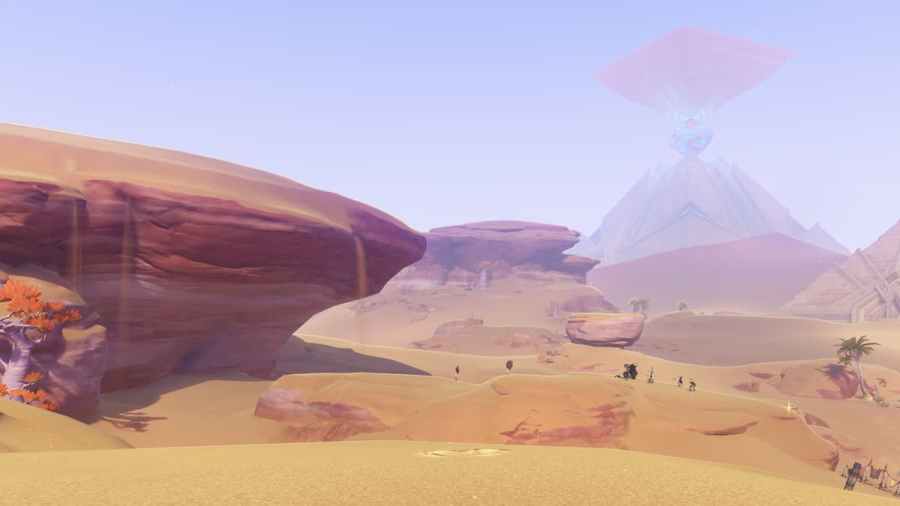 The fairy tales featured in Genshin Impact likely hold more information than first appears. The A Thousand Nights book series has several chapters and stories, and it is likely a nod to One Thousand and One Nights. If you want to read Genshin's tales, you'll need to collect ten torn pages for each chapter. Here's where to find all ten pages for A Thousand Nights (IV) in Genshin Impact.

The ten torn pages for A Thousand Nights (IV) are all located on the sands, above ground in the eastern portion of the Hypostyle Desert. You will not necessarily need to have completed the World Quests in this area, particularly the Golden Slumber quest line, but we highly recommend that you do. Being able to fully unlock areas in the desert will guarantee you can find these pages and the torn pages from other chapters of A Thousand Nights.

Your hunt for the ten torn pages starts in the southern part of the Hypostyle desert, the Land of Upper Setekh. This first page is in the corner of the wooden crate pictured above. You'll need to fight a few fatui members to retrieve it.

Walk to this location from the first, as using the teleport waypoint nearby will actually place you underground, farther away. The page you are looking for rests on the corner of this wooden crate. A few Eremite enemies will guard it.

This torn page is not on the ridge above you. Use the teleport point nearby, then walk into the Eremite camp featured in the main story. The eremites here are NPCs, not enemies. A little past the gate, you'll find the page on the wooden crate, as seen above.

Related: How to find another way to enter the central area in Genshin Impact – Dune-Entombed Fecundity

The fourth torn page is in another Fatui camp farther north. The wooden crate you're looking for is by itself in the northwest corner of the camp.

Your fifth stop has more than a few hazards around it. There will be exploding barrels and a few Treasure Hoarders. You can find the torn page you're looking for in the corner of the crumbling ruins. While you're here, you might also want to use Pyro to light the four elemental pillars nearby, which will reward you with an Exquisite Chest.

You can find the sixth page in a smaller Eremite camp nearby Caravan Ribat. Defeat the enemies and collect your prize.

The seventh page is on the surface level but lower than most pages are. Its location is nearby the sink hole where you first meet Jeht and her father. There will be no enemies here to fight you for the page.

Torn page number eight is nearby, up above. It will appear that there is only one Eremite enemy at this camp, but when you approach, three more will appear. The page is resting on a wooden crate in the corner of the camp.

We recommend traveling on foot to the next two locations. Using any teleport waypoint will place you lower than the torn page locations and force you to climb. The ninth page is resting on a mat in a large Eremite camp. You'll need to fight two elite Eremite enemies here.

The last page is in a ruined building with a few eremites and treasure hoarders guarding it. Look for the page in the pile of debris picture above.

Each chapter of the A Thousand Nights book series requires you to find another ten torn pages scattered around the deserts of Sumeru. If you need help finding these other books, we've got you covered: