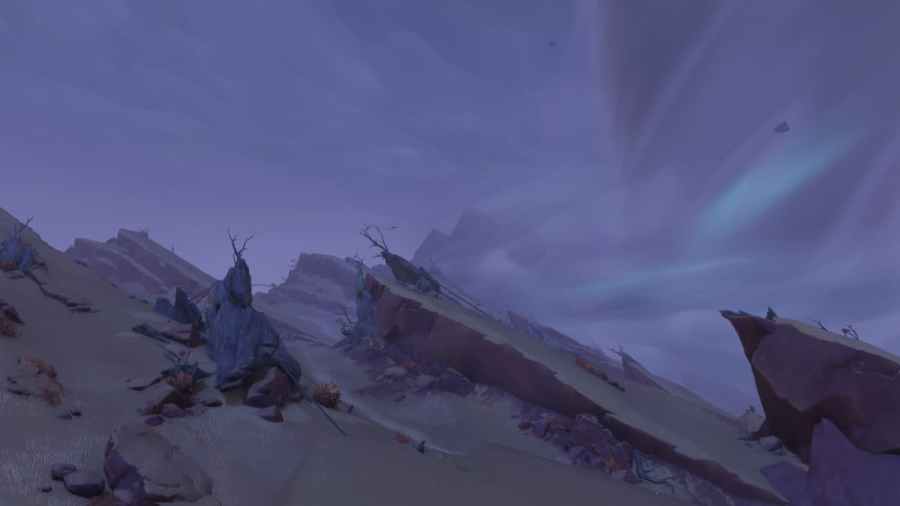 As you explore around the Desert of Hadramaveth region of Sumeru in Genshin Impact, you may come across torn pages. When collected you've collected 10 in a set, you'll be able to craft a book in the A Thousand Nights book series, a fairy tale that may mean more than just the story it presumes to tell. Here's where to find all of the Torn Pages to complete A Thousand Nights (III) in Genshin Impact.

We highly recommend that you finish the entirety of the Dirge of Bilqis World Quest before attempting to find these torn pages. You will not be able to reach some of them without progressing at least partly through this quest.

The first torn page is found easily. It's resting on top of two wooden crates near the top of the Tanit Camps on the eastern edge.

This page is underground. You won't be able to reach it without having progressed through some of the Dirge of Bilqis World Quest. Use the nearby underground teleport waypoint and exit the room you pop into on your left. Follow the path to an underground river. You'll find the torn page resting on a dune on the right side of that river.

This torn page is resting on top of the platform halfway up a building in Gurubad. The building is the same one that you complete the final Cascade puzzle in.

There is a small canyon to the north of the Wadi Al-Majuj canyon (in which you find the Pathfinder Logs.) nearby its east entrance are some wooden boxes. The torn page you are looking for is on the box indicated above.

This torn page is at the tip of a northwest dune. You can find it nearby the dead tree. If you want an extra challenge, try to collect the page without alerting the Hilichurl nearby.

You'll find torn page number six resting in a pile of debris. Look for the pile nearby the crossroads in the northwest corner of the Desert of Hadramaveth.

Related: How to put furnishings inside fish tanks in Genshin Impact

If you use the underground teleport waypoint in the Debris of Panjvahe canyon, you'll see a large building if you turn to your left. Scale the building. The torn page is on top of the entrance.

Page eight is resting in the sand across the way from a large Weathered Obelisk puzzle in the eastern part of the desert. You'll need to fight a few Eremite enemies to retrieve it.

You'll also need to defeat more Eremites at the location of number nine. After you do, you can find the torn page on the wooden crate pictured above.

If you didn't spot this torn page while completing the Dirge of Bilqis World Quest, you're in for a bit of a walk. Teleport to the underground waypoint nearby, then backtrack through the cracks in the ceiling using four-leaf sigils. Keep backtracking into the next room. You'll want to stick to the lower part and enter the puzzle room shown above.

Look at the Seele statue on your right when you enter the puzzle room. The torn page is on the stone slate nearby the glowing cell, as indicated in the picture above.

Each chapter of the A Thousand Nights book series requires you to find another ten torn pages scattered around the deserts of Sumeru. If you need help finding these other books, we've got you covered: