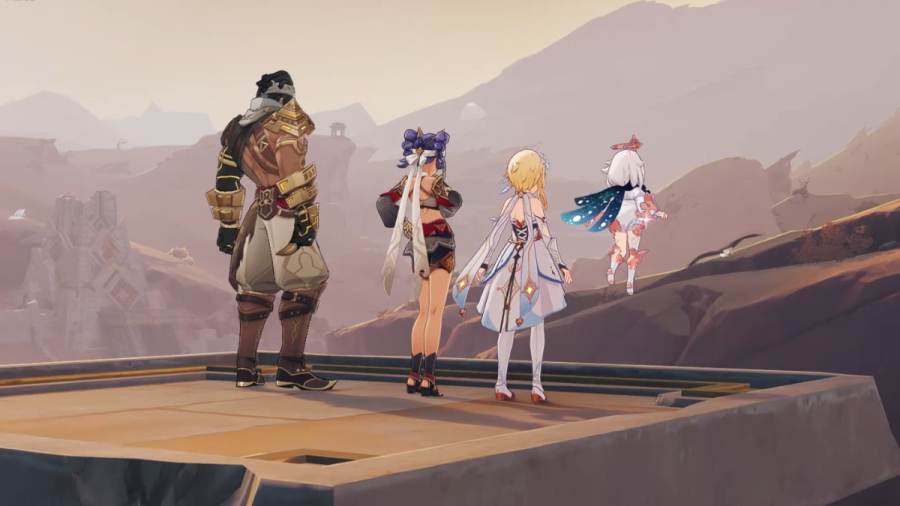 The Temple Where Sand Flows Like Tears is a Genshin Impact World Quest, and is the second part of The Dirge of Bilqis quest chain. It follows your journey to helping Jeht find the Mother of the Jinn. To unlock this quest, you must first complete the prerequisite: Wisdom Has Built Her House, She Has Hewn Out Her Seven Pillars. You also need to have unlocked Genius Invokation TCG.

For this World Quest, we highly recommend turning on the quest marker/quest navigation (the blue diamond that shows you the way) as it will make navigation in the underground maze so much easier.

Upon starting, follow the quest marker to the outskirts of Gurabad, where you'll meet with an NPC named Azariq. After the dialogue with him, you'll be asked to find a way to enter the temple.

Activate the device and open the gate

You'll be introduced to a new puzzle type unique to the Desert of Hadramaveth. The giant device is called a Rune Mechanism, and it can get rid of Sand Piles that Anemo can't blow away. You need to use Normal Attack to change the direction of the Rune Mechanism so that the blue beam (circled above) is facing the Sand Pile.

Doing so will force the Sand Pile to disperse, revealing an object. In this case, it will reveal a mechanism that you can interact with to open the temple gates up ahead.

Activate the device within the temple

Once you've entered the temple and read some dialogue, interact with the device in front of Azariq to remove some sand from the giant pyramid at the center of the room.

Touch the giant device at the temple's center

After the dialogue, interact with the blue diamond beside Jeht at the bottom of the pyramid. You can then proceed with solving three similar puzzles that must be done in the exact order.

For this segment, you need to activate all the devices in the room. You'll need to complete the following objectives three times:

Follow this full walkthrough to guide you every step of the way: How to solve all puzzles in The Temple Where Sand Flows Like Tears World Quest.

Touch the giant device at the temple's center

After scattering all the sand covering the pyramid, you'll be prompted to touch the giant device at the center. Interact with the glowing spot at the foot of the pyramid to prompt a cutscene and dialogue to play. Once done, plunge down the crater to loot a Luxurious Chest.

Check the situation outside the temple

Follow the quest navigator toward the exit and head to the balcony overlooking the desert. After completing the dialogue, you'll get the Wonders of the World Achievement called "... Shew the Kingdoms Thy Shame."

Related: How to solve the Weathered Obelisk puzzle at Liloupar’s Cell in Genshin Impact

Go to the ruins opposite the square

Follow the quest navigator and glide to the entrance on the opposite side of the ruins. Defeat the Primal Construct to open the door and reveal a new exploration area.

Once inside the new temple, follow the quest navigator toward Liloupar's Cell, marked by a giant tree at the center of the underground cave. You'll be prompted to defeat a Primal Construct similar to a weaker version of the Algorithm of Semi-Intransient Matrix of Overseer Network. Once that's done, the Mother of the Jinn, Liloupar, will become your friend.

You'll get a Gadget called the Jinni in the Magic Bottle - Liloupar. We recommend equipping it while exploring the Desert of Hadramaveth.

Go through the Pairidaeza Canyon

The next segment can be completed by following the quest navigator again. Once you reach the swampy area, Eremites will attack you. Defeat them to proceed.

Track your foe by following the footprints

Watch the highlighted area in the mini-map to help you navigate around the area. You need to go to the Eremite camp, which looks like a ransacked building, pictured above. Climb up and Investigate the glowing spot across the Dendroculus. You may need to defeat enemies that interrupt.

Don't teleport. Instead, follow the quest navigator toward the glowing spot. You'll then be prompted to return to the tribal settlement, so head to the Tanit Camps—you can use the Teleport Waypoint to save time. After speaking with Babel, follow the navigator to Azariq and Jeht.

Follow the quest marker to find the duo. After speaking with Azariq and Jeht, you'll be prompted to play TCG with Azariq. This part is not skippable, as you can't complete the quest without finishing the duel. You can choose to refuse to battle to prepare your deck, but will still have to battle Azariq! He uses the Fatui Hydro Gunner and Cryo Cicin Mage.

After winning against Azariq, you'll unlock the next World Quest in the series called the Dune-Entomed Fecundity: Part I.

To solve more puzzles in the Desert of Hadramaveth check out our guide on How to get the Genesis of the Rift Sumeru Hidden Achievement in Genshin Impact here on Pro Game Guides.