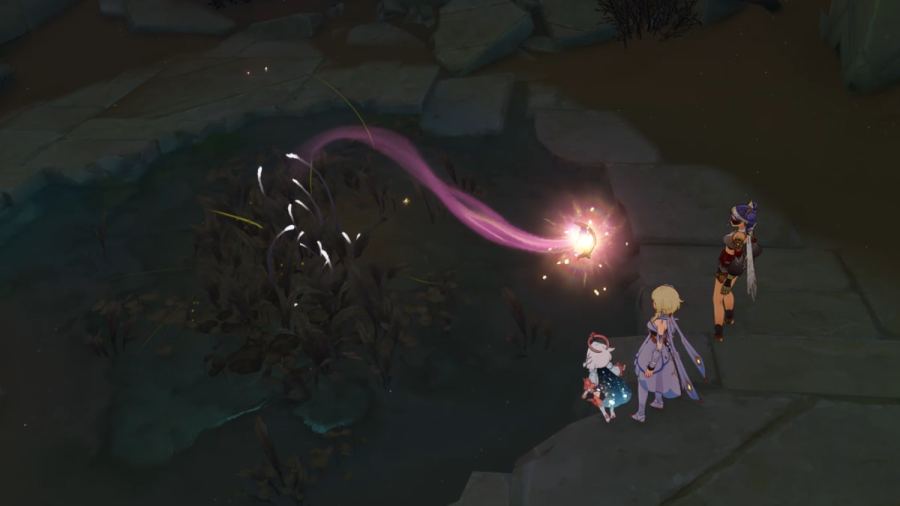 Dune Entombed Fecundity: Part I is a Genshin Impact World Quest, and is the third part of The Dirge of Bilqis quest chain. You'll unlock it immediately after completing the following prerequisites:

Table of Contents
How to complete Dune-Entombed Fecundity Part I World Quest in Genshin Impact
Talk to Babel
Descend to the innermost depths of the Eternal Oasis in Mt. Damavand
Enter Mt. Damavand & Investigate the abandoned Eremite camp
Examine the mysterious mechanism
Proceed deeper
Connect the junctions
Proceed deeper
Find another way to enter the central area
Proceed deeper
Collect Liloupar's fragment
Head into the depths
Open the door
Head to the depths of the mountain
Activate the mysterious mechanism
Enter the central area
Head to the exit

Don't forget to turn on your quest navigator to make it easier to get from one place to another. It won't be useful in every part of the quest but might become useful when you lose your way.

Upon starting the quest, head to the Tanit Camps and speak with Matriarch Babel. From here, you'll be prompted to begin an expedition through the Passage of Ghouls. Make sure to bring a battle-ready team as there are a few battles throughout this quest.

Descend to the innermost depths of the Eternal Oasis in Mt. Damavand

Head to the Teleport Waypoint in the Passage of Ghouls and jump down the cliff directly in front of it. Walk west to trigger a small cutscene. A few waves of enemies will appear. Defeat them with the help fo Jeht and Azariq to proceed.

After the dialogue, you'll be prompted to enter Mt. Damavand. Follow the quest navigator further west, until you enter the area called Bayt Al-Muazzam. Once you spot the viewpoint, turn left to find the Eremite camp. Approach it to trigger dialogue with Jeht.

You'll find a locked device up ahead. Despite being locked, you can interact with it to complete the objective. Doing so will trigger dialogue with Jeht and unlock the device. Interact with it again to start it up, forcing sand to fall up ahead.

Follow the quest navigator to the left side of the device. You'll find a Four-Leaf Sigil, which you can hook onto to get to the other side. You'll find a Seelie that you can follow if you like. Otherwise, simply go forward as there is only one path.

Once you reach the clearing pictured above, interact with the device to start it up. Sand will start flowing from a nearby structure, and dialogue with Jeht will prompt.

Glide down to find a locked and unlocked device. Ignore the locked device for now, and turn your attention to the puzzle up ahead. Interact with the unlocked device to connect the junction on the ground and turn on the larger structure inside the room up ahead.

Enter the room and interact with the Everlight Cell. You need to approach it from the right side of the column, as an invisible wall is blocking the left side. Interact with it to Rotate Cell once, which will create a Primal Beam connecting to the floating Cell. This will prompt a Common Chest to spawn outside and unlock the remaining device.

Exit the room and loot the Common Chest. Then interact with the device behind it to connect the second junction, completing this segment.

Glide east, approaching the giant slanted rock pictured above. Go behind it to find a device and some fungi. Defeat the enemies to get them out of the way.

Interact with the device to open a door further ahead. Then turn right and climb the stairs to find an intersection. Turn left to enter the room that just opened, revealing a huge exploration area. Upon entering, a small cutscene and dialogue with Jeht will trigger.

Find another way to enter the central area

After solving the puzzles above and crossing through the door, loot the Common Chest waiting for you. Then turn your attention to the giant hole in the ground. Glide or plunge downward, then head toward the cone-shaped opening up ahead. You'll immediately spot a hidden Teleport Waypoint, which we recommend unlocking for future exploration. You'll also find a glowing spot nearby. Approach it to proceed with the quest.

From the direction of the glowing spot, follow the path forward while staying on the same ground layer (do not plunge downward). You'll eventually find three Primal Constructs clustered around a locked mechanism. Defeat them to unlock the mechanism, and interact with the latter to open the giant door that will lead you to an enclosed room.

Upon entering the room, turn left to go down the stairs. You'll immediately spot Liloupar's fragment on top of a small patch of grass. Interact with it to trigger dialogue with your exploration party.

Head into the depths

Turn back and go up the stairs to return to the upper floor. Enter the cave behind the Obelisk to find the ruins of a water supply station. Keep going forward, then turn right to enter a coffin-shaped doorway with a glowing spot. Step on the glowing spot to complete the objective and continue on with the quest.

Approach the mechanism at the center of the room to prompt a Consecrated Beast (purple scorpion) to appear. Defeat it, then interact with the mechanism to spawn an Exquisite Chest and open a door to the right. There's a puzzle up ahead, but you can ignore it. For this quest, we'll be crossing through the door that just opened.

Head to the depths of the mountain

Loot the Exquisite Chest to get a Quest Item called Border Fort. It can be used to solve the chessboard puzzle at Shafhe Shatranj later down the line. After looting the Chest, enter the door that just opened and keep following the path forward.

Once you've gone deep inside the room, you'll find a device down the stairs. Interact with it to trigger a small cutscene of sand falling.

Enter the room behind the device and glide downward. Interact with the yellow mechanism at the center of the room to spawn enemies. There will be two waves of Primal Constructs (two per wave). Defeat them all to prompt the exit to open.

Head to the exit

Follow the direction of the sand and exit the building. Doing so will prompt dialogue with Jeht. Respond with (Return to the surface) Let's go back first. From there, read the dialogue with Jeht, Liloupar, and Azariq to complete the World Quest and unlock the next one in the series called Dune-Entombed Fecundity: Part II.

To explore more of the Desert of Hadramaveth, check out our guide on How to unlock the Fane of Panjvahe Domain in Genshin Impact here on Pro Game Guides.