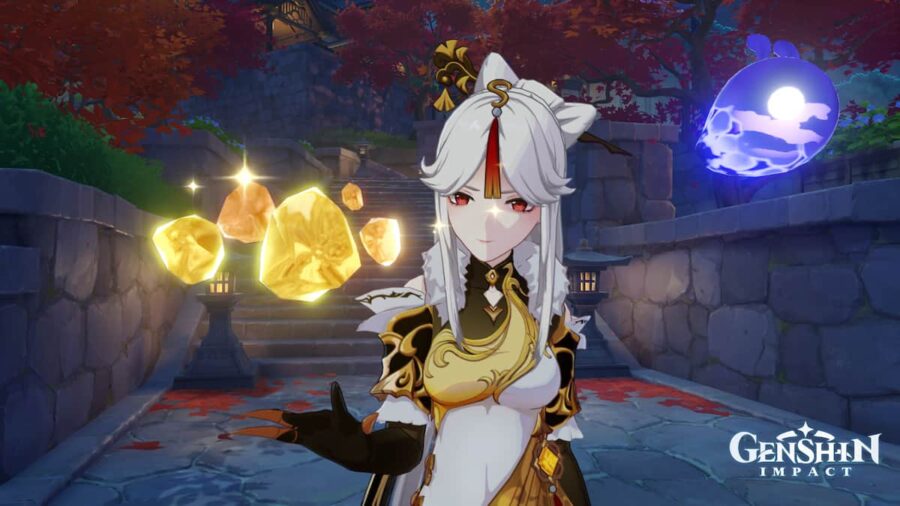 Ningguang—Tianquan of Liyue's Qixing, a most-savvy businessman who pulls the strings behind the nation's massive commerce industry, a certified Mora lover, and the game's first four-star Geo Catalyst user. Players can get the elusive Lady of the Jade Chamber through Standard and Limited Banner summons, and occasionally through the Starglitter Exchange from Paimon's Bargains.

Don't be fooled by her four-star status. With the right build, Ningguang shines against enemies (especially bosses) of almost all Elements and can carry your team as a Main or Burst DPS. Here's her best-in-slot build plus alternatives depending on your team comp.

Ningguang's skills scale off Attack so she benefits from the higher base stats from five-star Catalysts—most of which synergizes well with her. The three below are her best weapons.

For four-star weapons, Ningguang's best-in-slot is the Dodoco Tales at Refinement 5. If you missed out on the Golden Apple Archipelago Event, these runner-ups are great for her too:

A lot of Artifacts work well with Ningguang, but these are some of the best options to maximize her Damage output. Keep in mind that your weapon will determine the best Artifact Substats to roll for. Prioritize getting her Crit Rate, Crit Damage, and Attack stats up.

You want to aim for at least 40% Crit Rate, 170% Crit Damage, and 1,700 Attack to make her viable against tougher enemies, but going higher is always better!

All three of Ningguang's Talents boost her Damage output, but if you're conserving resources, consider this priority:

Ningguang is easy to use as a quickswap character (Burst DPS) or on-field carry (Main DPS). Take advantage of Geo Resonance, as it will give +15% shield strength and +15% Damage and -20% enemy Geo Resistance for characters protected by a shield. On that note, Ningguang's best Support is Zhongli, who can offer 100 percent shield uptime plus Geo Resonance.

Here are some quick tips to further enhance your Ningguang gameplay:

Check out our guide on Farming for Diluc & Ningguang in Genshin Impact to help you build your next DPS character!

Can you play Genshin Impact on PlayStation and Xbox?

How to unlock the Moshiri Kara Inazuma Domain in Genshin Impact?