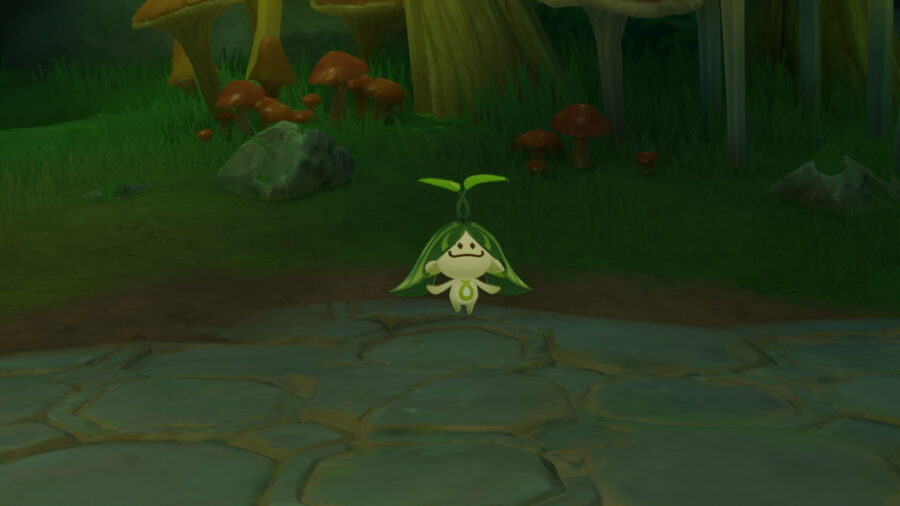 Aragaru's Drawing is one of three Genshin Impact World Quests required to unlock Memory's Final Chapter, the sequel to the Agnihotra Sutra questline. In this story, you reunite with the friendly Aranara named Aragaru, who needs your help investigating Eremite camps hidden underneath Chatrakam Cave.

To unlock Aragaru's Drawing, you must first complete all the quests in the main Agnihotra Sutra World Questline:

Once they're all done, you'll unlock three hidden World Quests that will not appear in the quest menu. They can be done in any order, but we highly recommend following this sequence:

Head to the area circled in the image above to find the entrance that leads you inside Chatrakam Cave. You'll spot two Eremites right by the entrance. They won't stop you from entering the cave, but you must defeat them as part of the objective of this World Quest.

Once inside, keep following the path forward until you reach the area with a broken bridge. Jump to the other side (not downward) to spot two more Eremites. Like before, you must also defeat these two to proceed.

Related: All 8 Eremite camp locations in Sumeru in Genshin Impact

Next, keep going forward until you reach a clearing with three Eremites. You need to defeat all three to spawn the Eremite boss named Azrul, The Farrokhzadan, automatically. You can ignore the rest of the Eremites in the cave once you defeat Azrul. Aragaru will immediately spawn and speak with you. The little Aranara will ask you to investigate three Eremite camps.

The locations of all three Eremite camps are highlighted in the mini-map and World Map, so you can use the quest navigator to find them. As they're all located within the cave, don't use Teleport Waypoints to get to them. The north and west camps will greet you with a glowing Investigate spot you must interact with, while the east camp will contain a parchment called Employer's Orders, which you also need to interact with to complete the objective.

After investigating all three camps, return to Aragaru to give him the dried flower you found, completing the World Quest. After completing this quest, Aranaga's Memory, and Aranakin's Old Friend, you'll unlock the final sequel to Agnihotra Sutra called Memory's Final Chapter.

Check out our guide on All Vasmrti nursery locations in Genshin Impact to unlock another sequel in an Aranyaka World Questline.