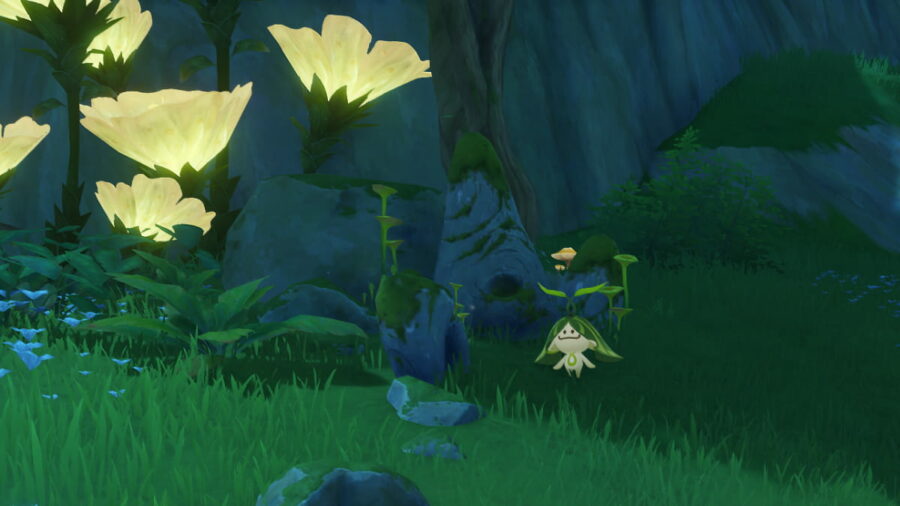 The Risen Moon Chapter is the second part of the Agnihotra Sutra World Questline. It involves helping an Aranara named Aragaru explore the Realm of Khab under the Chatrakam Cave in order to find the Barsam Flower.

Use the Kusava to open up a path

Once you're deep inside the cave, you'll be asked to look for three runes. You can find them hiding behind rocks with green vines in the three areas marked by the blue arrow above. Use the "Kusava" to get rid of the rocks to reveal the runes, then interact with them to count toward the quest objective.

Once that's done, you'll be asked to exit the cave. Use the "Kusava" to unblock the path and follow the quest marker to the next location.

Use the Kusava to break the seal on the Barsam Flower

Now in the new cave, you'll be asked to use the Kusava to break the seal on the Barsam Flower. There are two Seelies in the clearing. You need to follow each of them to their Posts in any order. While following them, you'll encounter various puzzles, Chests, and rocks with vines. We highly recommend using the "Kusava" on all the rocks with vines that you encounter as doing so will help you solve optional puzzles as well.

While following the left Seelie, you'll eventually encounter an optional Dendro Monument puzzle. Use the "Kusava" on the nearby rock with vines to reveal the third Dendro Monument to solve the puzzle.

Once the Seelie guides you to an area with Floating Hydro Fungi, make sure to break the rock with green vines using the "Kusava," as it's hiding the first seal. Interact with the seal for it to count toward the quest objective. Continue following the Seelie and breaking all rocks with vines along the way. It will eventually guide you back to the starting point.

Follow the Seelie on the right toward the cave and use the Clusterleaf of Cultivation to summon Four-Leaf Sigils to help you traverse the area. Keep breaking all the rocks with vines along the path, and the Seelie will eventually lead you to one hiding the second seal. Make sure to interact with the seal for it to count toward the quest objective.

When you encounter this optional mushroom puzzle, you can solve it by doing the following. Use the "Kusava" to break the rock behind it, spawning a broken mushroom. Apply Electro onto the broken mushroom, and it will transform into a flower. Interact with it to activate and get a Chest reward.

After guiding both of the Seelies, the barrier in the main room will disperse, allowing you to pass through and immediately spot the third Seelie. Like the previous two, follow this Seelie and break all the rocks you see with the "Kusava." Since this final stretch is filled with Ruin Sentinels, make sure to bring a strong team!

Once you reach the clearing with the Ruin Grader and Sentinels, defeat them all to unlock an Exquisite Chest and clear the way to use the "Kusava" on the rock with vines behind the enemies. This rock is hiding the third seal, which you need to interact with to complete the quest objective. Once that's done, follow the Seelie to its Post and follow the quest marker to interact with the Barsam Flower to complete the World Quest.

Check out our Genshin Impact A Prayer for Rain on the Fecund Land World Quest guide – Varuna Gatha to complete another prerequisite for Festival Utsava.