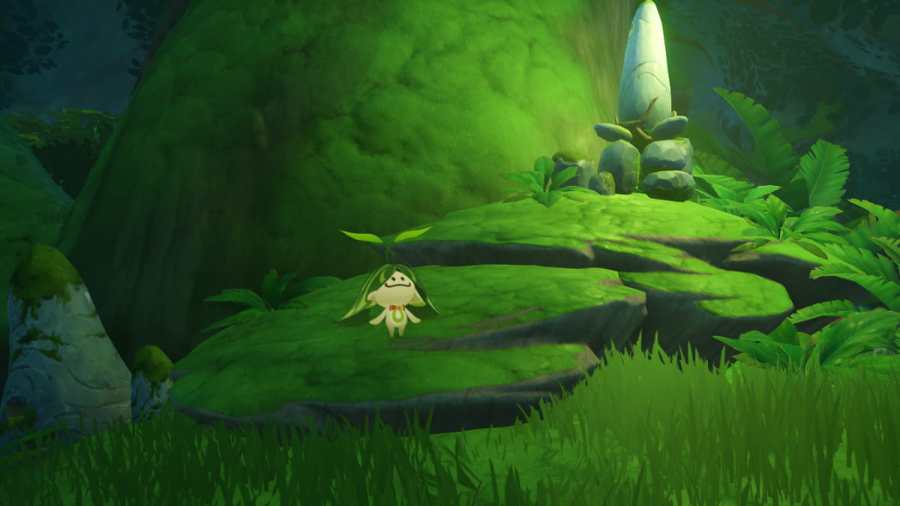 Slumbering Roots is a World Quest in the Varuna Gatha World Questline. In this segment, you must search for and help an Aranara named Arakunti to heal the Varuna Contraption.

To unlock this World Quest, you first need to complete the Varuna Gatha World Quest, the first in the questline. Once that's done, you'll unlock three new quests at the same time, and they can be done in any order:

In this guide, we'll walk you through how to complete Slumbering Roots.

Head to the Grove of Dreams to find Arakunti

Follow the quest marker to the Apam Woods, then head to the area circled in the image above, north of the highlighted quest area in the World Map. Here, you'll find some old structures and a Four-Leaf Sigil, but look carefully, and you'll find an underground entrance. Jump down (be careful of fall damage!) and follow the path until you find the glowing spot near the water.

Use the Vintage Lyre to play the Rhythm of the Great Dream (fa > mi > so > fa > do) to be transported to the Grove of Dreams, where Arakunti is waiting.

Find the "branch" with Arakunti

Follow the quest marker and climb approximately halfway up the big tree until you find the glowing spot beside the branch statue. After speaking with Arakunti, you need to head to the Silapna to play Arana's tune. Before that, we recommend using the nearby Clusterleaf of Cultivation (pictured above) to release Four-Leaf Sigils and make it easier to traverse the area.

Play the Rhythm of the Great Dream in front of Silapna

Follow the quest marker to the platform in front of the branch statue to find the rock with a swirl pattern called the Silapna. Equip the Vintage Lyre and play the Rhythm of the Great Dream (fa > mi > so > fa > do) in front of it to teleport to the dream world.

Make the three "leaves" in the dream turn towards the "branch"

As soon as you're transported into the dream world, you'll find the first leaf statue in front of you. Rotate it once or until it's facing the branch at the center of the clearing. You can find the other two leaves by following the direction of green traces circled above—or by following our directions below. Don't forget to use the Four-Leaf Sigils to make it easier to get around.

Head to the platform with the branch statue, then look downward toward the left to find another leaf statue (northeast of the highlighted quest area). Rotate it twice or until it's facing the direction of the green traces. Once that's done, use the Four-Leaf Sigils to head southeast of the quest area to find the third leaf.

Upon approaching the area, you'll be attacked by a Ruin Drake and two Ruin Sentinels. Defeating them is optional. Like the others, rotate the leaf statue once or until it faces the green traces. Once all three have been correctly rotated, you'll be prompted to play the Rhythm of the Great Dream in front of Silapna.

Climb the tall trees until you return to Silapna, then equip the Vintage Lyre and play the Rhythm of the Great Dream (fa > mi > so > fa > do) in front of it to teleport back to the real world. Once there, talk to Arakunti to complete the World Quest.

Check out our guide on How to find the hidden song in the Genshin Impact The Rhythm that Leads to a Gloomy Path World Quest to unlock another Aranara song.